Film Review: Let Them All Talk & The Prom 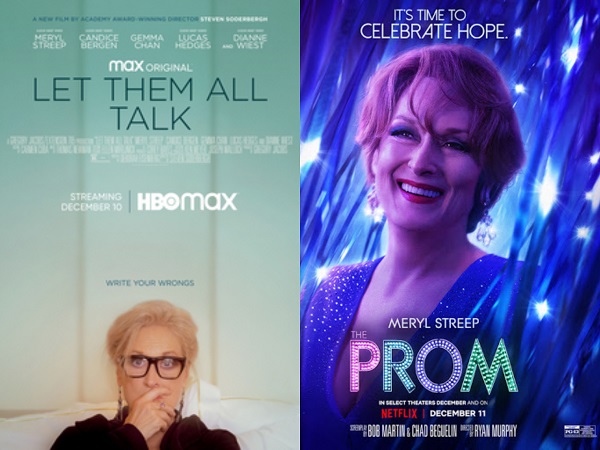 Let Them All Talk & The Prom

Let Them All Talk

Available on HBO Max and Crave

Two of the notable effects in this new era of high quality TV is the rise of dialogue based drama and the greater employment of women over 60, who know how to use their voices to act up a storm. Let Them All Talk, which can sound more like a manifesto than a title, stars three distinguished performers, Meryl Streep, Candice Bergen and Dianne Wiest, as old friends reunited after decades apart to take the famed ocean liner Queen Mary 2 to England. Accompanying them is Lucas Hedges’ Tyler, the beloved nephew of Streep’s character Alice Hughes, an acclaimed literary figure, who will receive a career achievement prize in London. On the ship without Alice’s knowledge are her literary agent Karen and a rival novelist, the best-selling mystery writer Kelvin Krantz.

With such a tasty set-up, the film can’t miss. Lovers of sophisticated comedy-dramas will know right away that the three old college chums, the other two being Bergen’s Roberta and Wiest’s Susan, will have dark secrets to reveal to each other, while the appearance of Alice’s agent Karen promises more intrigue. In their various ways, all the women vie for the attention of young Tyler, who wants to follow his aunt’s wish to amuse and help her old friends, while the attractive Karen enlists him to find out more about the new novel Alice is writing while on ship. It soon becomes apparent that Roberta is intent on finding a new wealthy husband as her life has gone downhill since the publication of Alice’s most famous novel, which featured a woman so much like her that it torched her life.

Karen and Roberta, for different reasons, want to know what Alice is writing. Is it the sequel to that acclaimed book? For Karen, that would be great since a follow up to Alice’s biggest hit is an easy sell for an agent. Roberta’s emotions are mixed: more acclaim might hurt her dwindling chances or could make her attractive to rich men again.

Director Steven Soderbergh and scriptwriter Deborah Eisenberg (an award-winning short story writer) follow the leisurely rhythms of people traversing on a liner, engaging in flirtations, heartfelt conversations and amusing dinner time chatter. Though Streep’s Alice is the star, the film is truly an ensemble production filled with beautifully realized scenes: Roberta and Susan reminiscing about their wild youthful adventures; Tyler watching Karen look at the stars in the ship’s observatory; Alice swimming every day and always pausing to look at a mysterious and distinguished black man reading books.

Let Them All Talk is an actor’s dream of a film. All of the performers get a chance to shine. Particularly impressive are Bergen, who makes Roberta into a deeply wounded character with  motivations that are justifiable and Hedges, who transforms a potential go-between figure into a complex person, who is foolish in love but deeply respectful of everyone he encounters in the film. Not surprisingly, Streep is wonderful as Alice, a woman who has made herself into a public intellectual without losing feelings for those who have meant the most to her throughout her life.

Let Them All Talk may be the Zoomer hit of the year. It’s definitely worth seeing.

The premise for The Prom is certainly enticing. Four Broadway singers and dancers, two stars and two troupers, decide to go to Indiana to defend a lesbian who has been denied entrance into her high school prom because of homophobia. Of course, they all expect a career boost, especially the two famous singers, who have just endured the biggest flop of their lives. (Imagine—a musical based on the life of Eleanor Roosevelt wasn’t a hit!) With Ryan Murphy—the producer of such terrific recent LGBTQ hits as The Boys in the Band and the series Hollywood, Ratched and The Politician—directing and co-producing The Prom, what could go wrong?

Sadly, a lot. The Prom, which should be an effervescent satirical musical, has way too many clunky scenes that are brassy but not beautiful. Part of the problem is the mixed motivations of those Broadway babies—Meryl Streep as star Dee Dee Allen, James Corden as co-celeb Barry Glickman, Nicole Kidman as a dancer with nary a hit and Andrew Rannells as Trent Oliver, a bartender waiting for a break. What do they want? To make fun of small-town America or help a young lesbian couple? Can Broadway performers become human beings? It’s funny to use the word “subtext” in a film that aggressively wants to be a happy musical, but if there’s something powerful lurking in the story, it’s that everyone wants to be real, at least some of the time

It feels as if Murphy doesn’t trust the material. Whenever a scene appears to be taking on resonance, it’s immediately followed by yet another song. The score by Matthew Sklar and Chad Beguelin is serviceable enough but it’s hardly Lerner and Lowe or Rogers and Hart. Perhaps the biggest flaw is the failure of the film to concentrate on the problems of the young lesbians, particularly Ariana DeBose’s closeted Alyssa Greene, whose mother, somewhat overplayed by Kerry Washington, is head of the PTA, which banned the lesbians from the prom in the first place. In one of the film’s few heartfelt scenes, Nicole Kidman’s Angie invokes Bob Fosse’s erotic and idiosyncratic choreography to build up the confidence of the out lesbian Emma Nolan (played by Jo Ellen Pellman).

Meryl Streep, who strikes the right Broadway bravado to play Dee Dee is stuck with a subplot in which she is romanced by the liberal high school principal (a charming Keegan-Michael Key). Though she’s the biggest star cast in The Prom, Streep is–admittedly showily–on the sidelines while Corden’s Barry Glickman is offered the centre stage as a very emotional performer coming back to his roots in the Midwest, where he relives the ostracizing inflicted on him by his parents when he came out. One of the top scenes is when Tracy Ullman, brilliant as she so often is, apologizes to her son, Barry, after decades of silence. Though Corden is fine in that scene—the film’s biggest tear-jerker—he does represent a casting problem. There’s nothing wrong with giving the role of Barry to Corden, who is straight, but there is with his interpretation of the role, which is campy, to say the least. It’s surprising that Murphy cast him in the film.

What can one say about The Prom? A feel good musical, which espouses liberal values, is just the right show to see during the holidays. Though the film could have been better, The Prom is fun to watch. Just don’t think too much about what’s going on in the film. Let me do the criticizing for you.