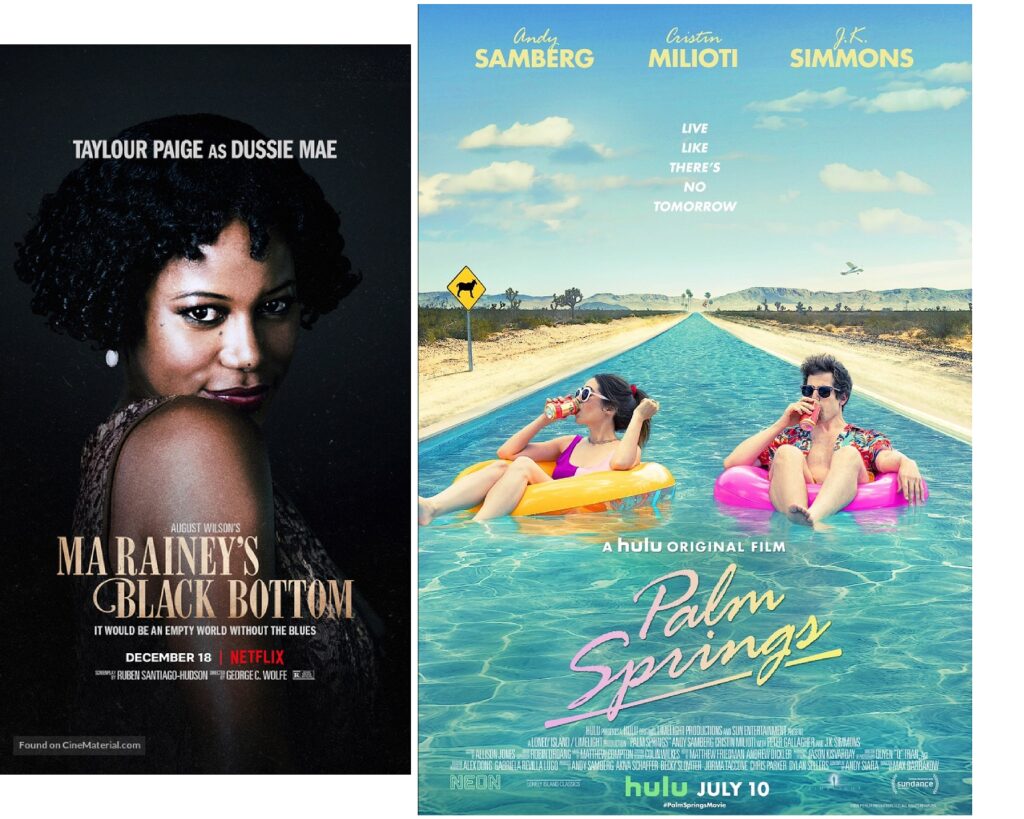 Two Hits—a comedy and a tragedy

Remember when Groundhog Day came out and everyone was surprised that Bill Murray and Andie MacDowell could play a romantic couple and the film would be a hit? Nearly 30 years later, audiences that enjoyed that lovely chestnut can enter into a new time loop romcom with, of all people, Andy Samberg and Cristin Milioti as the stars of Palm Springs. The film, which wowed the Sundance festival tastemakers last winter, is already a success in the U.S., where it has been playing on Hulu, a channel that doesn’t broadcast in Canada for months. Now, it’s finally appearing in Canada on Amazon Prime, where it will surely be a great highlight for families and couples seeking a slightly edgy comedy.

Like a reworked jazz standard, Palm Springs is enough of a variant on Groundhog’s Day to make it a delight on its own. Here, it’s Samberg’s Nyles, who is already aware that he’s stuck in a loop as the film begins. He’s at the wedding of his girlfriend Misty’s friends Tala and Abe and knows that he can create chaos or come off like aces depending on his mood. In this first version of the wedding we see endlessly in the film, Samberg’s Nyles decides to save Tala’s drunk sister from making a speech by performing a brilliant one himself. He proceeds to romance Milioti’s Sarah and is about to make love to her in the desert when he’s hit by an arrow shot at him by Roy (the ever brilliant J.K. Simmons). Crawling off to an eerily lit cave, Nyles warns Sarah not to follow him. Of course, she does and, quite quickly, they both wake up to experience the same day again.

Nyles’ time loop is now shared with Sarah and, we soon to discover, the disgruntled Roy, who really doesn’t want to be there. As Sarah learns the rules of their looped existence—death simply brings them back to the beginning of the day, you can do anything but everybody will be the same when you wake up again, you can get to know people very well over a period of time but they won’t know you, you can have sex with people but they can’t remember it—she has fun exploring her new existence. Soon, Nyles and Sarah fall in love since they and the occasionally malevolent Roy are the only ones who remember the events that transpire every day.

And here’s where Samberg and Milioti will surprise you. They’re funny and acerbic and endearing as a couple falling in love. So when the focus shifts from Sarah back to Nyles, who has to search for her after she deliberately disappears every morning, the film becomes mesmerizing: you are surprised to discover that you care for this mismatched couple.

Palm Springs is a brilliant first feature for director Max Barbakow and scriptwriter Andy Siara. Well-paced and nicely shot, the great thing about the film is that it is genuinely funny. It looks like they’ll have a fine future in front of them although you never call tell given the loopy nature of the film and television world since COVID.

Ruben Santiago-Hudson, script, based on the play by August Wilson

August Wilson, the preeminent Black playwright of his generation, is finally having a successful film career, more than a decade after his death. The first cinematic adaptation of the two-time Pulitzer Prize winning dramatist, the impressive Fences (2016), received critical acclaim for Denzel Washington’s direction and acting and Viola Davis’ stunning performance, which garnered her the Academy Award. For Ma Rainey’s Black Bottom, the next Wilson play to hit the screen, Washington has taken on the main producing role while Davis returns as the titular blues singer Ma Rainey.

Like Fences, the new film has powerful dialogue, well-constructed characters and a story that commands your attention. Both Fences and Ma Rainey’s Black Bottom are part of Wilson’s Pittsburgh or Century Cycle, ten beautifully constructed pieces that evoke the lives of Black Americans decade by decade throughout the 20th century. Unlike the nine others, Ma Rainey’s is set in Chicago but it does dramatize the lives of Black entertainers in America in the 1920s. Racism and the diminished lives of Blacks run through Wilson’s tales but so do many moments of artistic or physical prowess and triumphs—though not long lasting ones. Wilson’s great abilities include viciously frank and funny conversations and realistic situations that can suddenly be transformed into tragedy.

Besides being set in Chicago, the play differs from the rest of Wilson’s cycle in that it centres on a famous person. Ma Rainey did exist, of course, and was dubbed “the queen of the blues.” She was very likely a lesbian and led a life of splendid decadence for most of the Roaring Twenties. Gregory Wolfe’s direction is often at its best when Viola Davis’ Rainey dominates the scene singing the blues on stage or in the recording studio. A veteran of the theatre, Wolfe is attentive to the details involved in setting the scene for a star to shine.

Wolfe is not only excellent with Davis. He also excels with Chadwick Boseman, whose performance will likely duplicate what had happened in Fences. There, Washington’s perceptive take on the stubborn, willful Troy gets upstaged by the intelligent and emotionally resilient Rose played by Davis. Here, it’s Boseman as the brilliant but damaged trumpet player Levee who takes the film away from Davis.

No one in the cast and crew knew that Boseman was dying of colon cancer while filming Ma Rainey’s Black Bottom. It’s melodramatic to say that he saved his best for his last performance but Boseman is mesmerizing as the immensely talented Levee, who wants it all: fame, money, women and the time to create the new kind of jazz he burns to play. But within Levee is too much anger and fear. The racism he’s experienced makes him doubt his own ability to move beyond poverty and the power of white man. So it’s no surprise that Levee lashes out at black men, who aren’t the enemy at all. Like too many Black people then and now, Levee makes his own tragedy happen.

Chadwick Boseman is note perfect as Levee. Given the circumstances, it certainly seems possible that Boseman—previously the Black Panther, Jackie Robinson, Thurgood Marshall and James Brown—will win the Oscar for his last role. Ma Rainey’s Black Bottom is a must-see, though possibly too theatrical, and one can only hope that Denzel Washington will be able to produce the rest of August Wilson’s cycle. If Netflix continues to sponsor them, the next decade may become Wilson’s best yet.