Film Review: Acasa My Home and The Reason I Jump 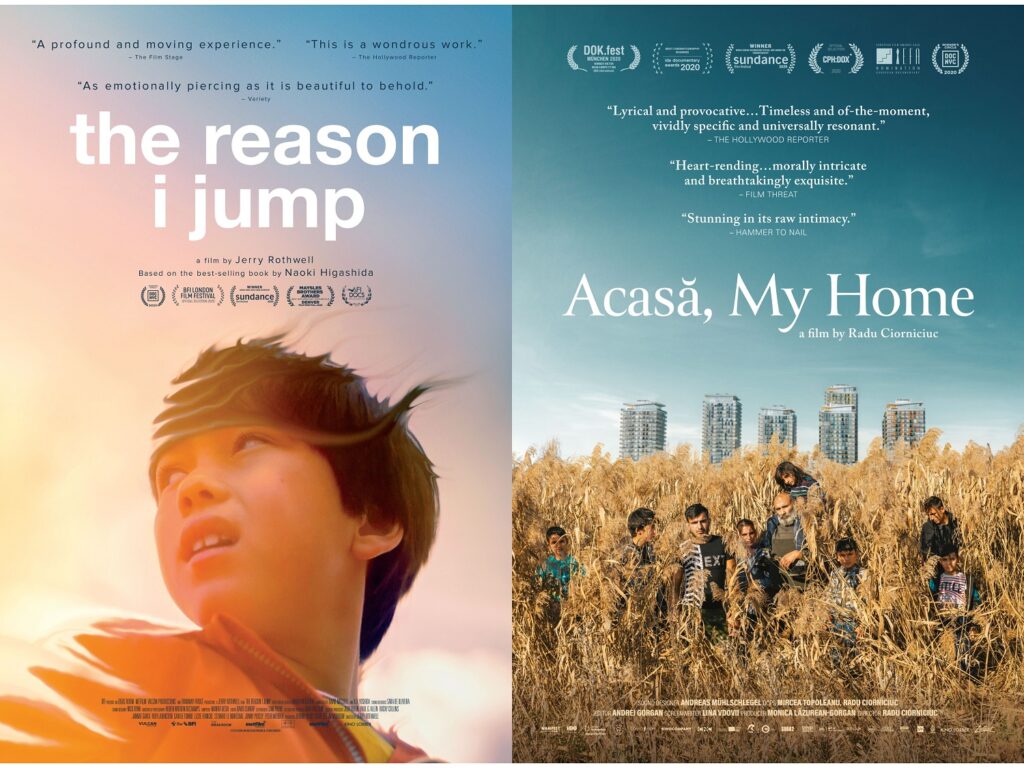 Acasa, My Home & The Reason I Jump

Based on the memoir by Naoki Higashida

Winner of the Sundance World Cinema special jury Prize for Cinematography, Rumanian Radu Ciorniciuc’s debut feature Acasa, My Home brilliantly plays up the contrasts between living in urban and rural environments. The film starts in the recent past when the Enache family lived in the Bucharest delta region, Văcărești. Literally at the outskirts of Romania’s capital city, Bucharest, Gica Enache’s wife and nine kids were the only people living in Văcărești until environmentalists forced the government to turn it into Europe’s largest protected park.

The audience is introduced to the wildly diverse environment through the Enache kids, who are led by the oldest boy, Vali. You see him catching fish, swimming and with the others, running through fields, and up hills, to their home, a ramshackle construction of abandoned wood, steel, glass and flotsam and jetsam. In many ways, life is idyllic for the kids but it’s also clear that they’re in poverty since the patriarch Gica is far more successful talking than working.

Then things change. Once the Văcărești Park region is created, the police, environmentalists and the media arrive. Gica Enache is briefly lionized and then quickly moved off with his family to a cheap apartment, where the basics are provided including schooling for the kids. Life, previously primitive but natural, is transformed into being a part of the typical poverty-stricken urban environment today. TVs, computers, cell phones, t-shirts, jackets, and parties utterly change the children from innocents into sulky inner-city kids. Vali’s attention moves to his new girlfriend and a life apart from the family.

Before he leaves, Vali and the other kids reflect on what’s happened to them. It’s been a big change, one that they can’t really think through at this stage in their lives. Here’s what makes the film so remarkable: the audience is left to analyze the situation. Was life better for them, living in nature? If that’s so, are there reasons to go the city anyway? After all, it’s the 21st century—you can’t stay in the past forever.

Radu Ciorniciuc spent years with the Enache family. The film achieves a rare intimacy thanks to the documentarian’s trusted relationship with his subjects. A confrontation between Vali and Gica could never have been shot with such cool dispatch had Ciorniciuc not won their respect. Nor could the constant interplay shown among the kids. Or the fiery relationship Gica has with the world. You really get to know the family and become interested in what happens to them. This is a humanistic,  finely constructed and shot debut feature.

Inspired by the brilliant 2007 book The Reason I Jump: the Inner Voice of a Thirteen Year Boy with Autism by then-teenaged Japanese Naoki Higashida, Jerry Rothwell’s equally wonderful film goes about creating a series of autistic sensory experiences that mirror the memoirist’s prose. Even in 2021, it’s rare that documentaries are praised for their aesthetics as well as the choice of  subject, but this one should be. Five contemporary stories are told: of the unique friendship between Ben and Emma, the athletic frustrated Joss, the artist Amrit and Jestina, whose need for the tools of expression is aided by her mother. Rothwell not only tells these diverse biographies but also renders each character’s autistic sensibilities cinematically.

Artist Amrit Khurana’s view of the world is compellingly represented through her drawings and paintings of people who look like Picasso figures in a comic book phantasmagoric universe. Ben and Emma, brought together by their parents as youngsters are now teenagers, communicating excellently with each other thanks to a linguistic leading block methodology effectively demonstrated by Rothwell. Perhaps most effectively, Joss’ perceptions are shown through cinematography, editing and sound mixing, tools that approximate his emotions and visual understanding.

Through editing, the way that an autistic personality absorbs the world—one by one rather than as a whole—is shown cinematically as objects are seen singularly, with appropriate sounds in effect per sequence. The director contrasts this intimate artistic sense with more conventionally shot scenes in which parents and caregivers fill in the backgrounds of each story. It’s here that one of the U.K.’s finest visionary novelists David Mitchell (Cloud Atlas), who translated Higashida’s memoir with his wife and co-wrote the script, is able to offer his perceptions on the language of autism and the nature of time. Here, too, we see the reactions of the world to the fierce advocacy of Jestina’s mother or the quieter activism of Ben and Emma’s families.

Winner of the Audience Award at Sundance and the Impact Award at the Vancouver Film Festival among a multitude of prizes and nominations last fall, The Reason I Jump is a poetically made documentary on a fascinating and important topic, autism. It’s an important film: stirring, lucid and progressive. It should be seen.