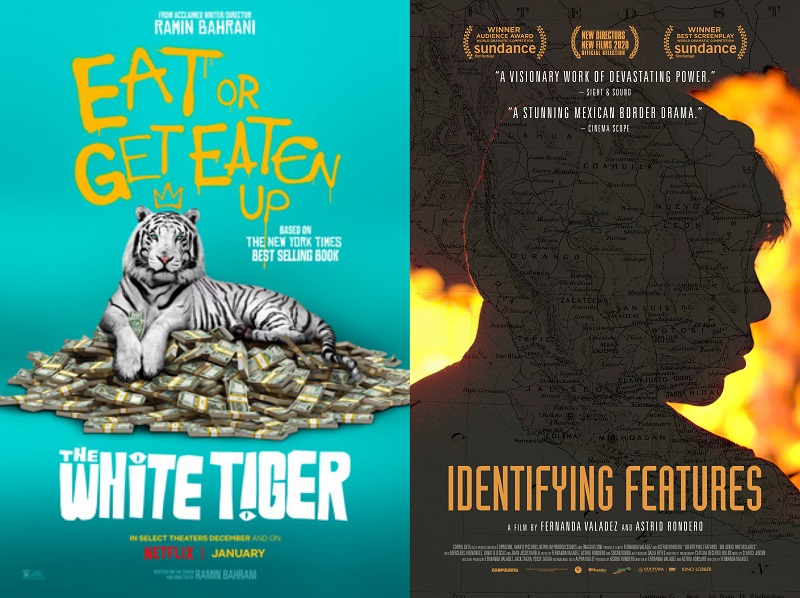 Tragic but brilliant tales in India and Mexico

Ramin Bahrani, director and script based on the novel by Aravind Adiga

Writing a novel or making a film about contemporary India is a massive undertaking, fraught with creative perils. How do you take on an entire subcontinent, filled with religious, historical and cultural differences, and make it seem true, while weaving a persuasive narrative? That was the challenge facing novelist Aravind Adiga when he wrote “The White Tiger,” which went on to score an international success, winning the Man-Booker Prize in 2008.

Adiga’s breakthrough, which he passed on to his friend, film director Ramin Bahraini, to whom the book is dedicated, was to examine the economy of the country and see what that said about India. Trained as a journalist on business affairs, Adiga brilliantly skewered India through its kitty-kat recreations of globalization—endless high-tech firms, imitative gadgets and fast-food joints—while allowing old-style 3rd World corruption, poverty and a hidebound hierarchical system to prevail.

The book and the film sharply satirize India’s economic success for most of the proceedings until turning far darker as the stories and characters introduced in the first part of the narrative move on to their inevitable bloody fate. The protagonist in The White Tiger is Balram Halwai, a lower caste worker from the north, whose rise to riches takes place as he slavishly interprets the role of faithful servant to the family, who keeps his village in poverty.

While the brutal father and other members of this Mafia-style cabal treat Balram with contempt, his son Ashok and wife Pinky, who have recently returned from America, make a point of treating their new driver reasonably well. That is, until a fateful night when bad driving kills someone—and the driver is a drunk Pinky, not Balram. (Readers of Tom Wolfe’s “Bonfire of the Vanities” will recall a similar tragic car crash in that satire on the upper crust of American society).

Balram sees the blunt force of Ashok’s family as he is terrified into signing a confession, should it ever prove necessary. From that point on, Balram begins to fill his destiny as a rare white tiger, who will escape from the cage of the corrupt caste system and become a free man—or, in his words, an entrepreneur. Language and actions become far more brutal as Balram finds methods to acquire power while Ashok loses his way, becoming part of his family’s ruthless plans.

Lovers of The Godfather enjoy that film’s embrace of the philosophy of gangsterism that “is only business.” It may seem far too sweeping to compare the class system in India to the Mafia in the United States. But the power of The White Tiger resides in its tragic movement towards murder, bribes and ceaseless corruption. The amusing, reckless spirit of its set-up scenes in rural and urban India yield to harsh conclusions. That’s the power of Ramin Bahrani’s faithful adaptation of Aravind Adiga’s book. The White Tiger is a film of wit and murderous rage—in other words, a must see.

Winner of awards from Stockholm to Thessaloniki to Sundance, Identifying Features dramatizes what has happened to Mexico in the wake of the U.S.’s policies of barricading the border between the two countries and deporting those Mexicans who illegally move there, taking away substandard jobs from Americans. This taut film never even gets beyond the border, finding the tragic tales taking place in Mexico plenty enough for a compelling narrative. Beautifully shot and with excellent neo-realist performances, Identifying Features encourages viewers to consider the politics and racism that underline this well wrought tale.

The narrative resembles a detective story as we follow Magdalena, a middle-aged mother, as she travels to the border to find out what happened to her son Jesus, who has not been heard from in two months. Magdalena fears the worst especially when she quickly discovers that Rigo, his friend and traveling companion, has been found dead. Thanks to the casual aid of other women, Magdalena is able to talk with the Mexican authorities but it becomes clear that all they want is for parents to sign off on burnt or unidentifiable bodies in order to get rid of their large caseload.

Eventually, she hears of an older Indigenous man, who survived the seizure of a bus by bandits and has returned home to a village some distance from the border. Desperate, Magdalena heads there once she realizes that the elder and her son were likely on the same bus. Meanwhile, another boy, Miguel, is deported back to Mexico. The two encounter each other on the journey back to the village and team up, at first out of necessity, but soon because they quietly like each other.

Magdalena finds the Indigenous elder and hears his horrifying account of the murder of many of the bus passengers after it was taken over by a brutal band of thugs. It’s unclear whether Jesus escaped the violence but it seems very likely that he was killed there. Returning to Miguel’s home, Magdalena suggests that the two return to Mexico’s interior, far away from the deadly chaos near the border. That’s when a roving band starts chasing them and others, leading to a surprisingly well plotted but bloody conclusion.

Identifying Features is well scripted, with a plot that unexpectedly delivers the narrative goods. That will definitely keep viewers attentive, which is fine since the film is so much more than a thriller. The shattering of a civil society in Mexico’s border towns is captured brilliantly as is the hardened indifference of the bureaucracy to what is happening to their own (mainly) young people. Through characters like Magdalena and Miguel, it’s clear that the camaraderie among Mexicans is still alive but the desperate economic situation is eating away at its cultural roots. Despite everything, director and scriptwriter Fernanda Valadez allows for hope even in the midst of a tragic national drama. This is a festival film that deserves to attract a good viewership during this shut-in pandemic time.