Film Review: The Dig and Preparations to be Together for an Unknown Period of Time 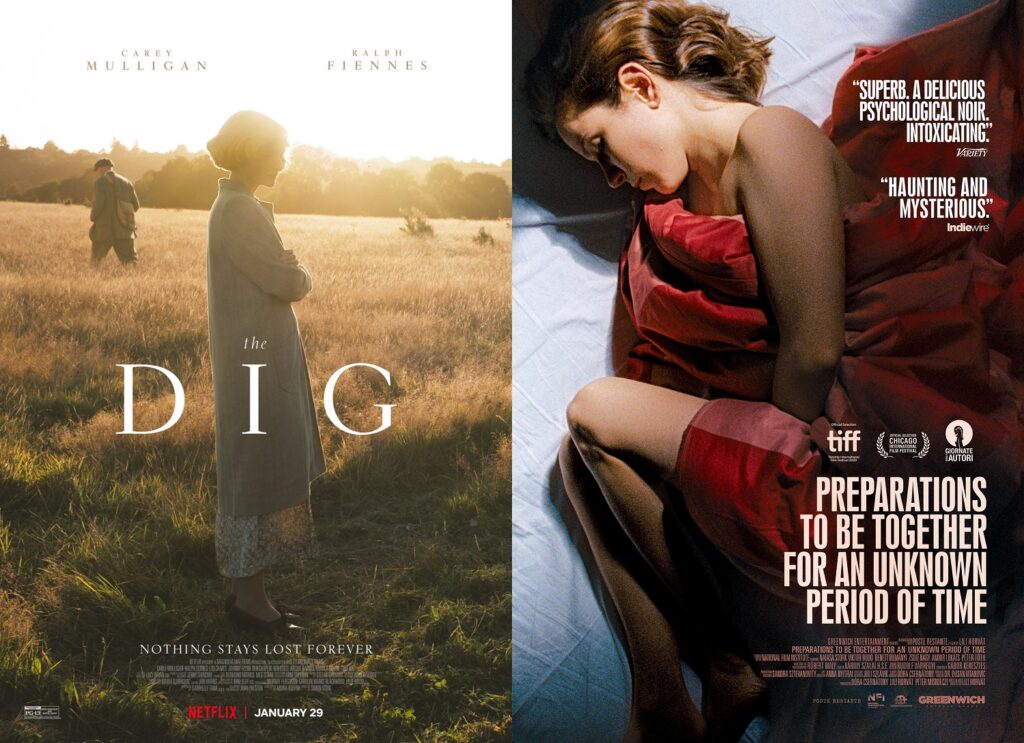 Digging up artifacts and finding romance in unique locations

We’ve all heard how tough it is for women to be cast in films. Case in point: Carey Mulligan, who played Scott Fitzgerald’s American dream girl Daisy Buchanan in The Great Gatsby just eight years ago and has since made a huge impact on stage as a young woman being pursued by a former older employer in a remount of David Hare’s Skylight in London and Broadway. When Promising Young Woman was released at Christmas, she was snidely treated by one of Variety’s critics as not being “hot enough” to be that film’s feminist fatale. Now in The Dig, she’s cast as an aging aristocrat intent on finding an ancient ruin on her grounds. No one is saying she’s too old for the part; indeed, she’s too young. And how old is Carey Mulligan? 35. What sort of roles will she be offered in the next decade? Will they really suit the award winning actor? How hot does a woman have to be to continue as a star?

It’s great that Mulligan, Ralph Fiennes and Lily James are cast in The Dig since they provide the mega wattage necessary to make the film palatable to a big audience. The problem—and the glorious thing—about The Dig is its subject, the discovery and initial excavation of the largest archaeological project in British history. The Sutton Hoo story is certainly one to make pulses quicken among historians and lovers of Britain but it isn’t an obvious subject for a film. Kudos must go to director Simon Stone, author John Preston, scriptwriter Moira Buffini and the actors for creating something entertaining and enlightening about such an unfashionable tale.

Not that Sutton Hoo’s main finding isn’t stunning to see. During the initial excavation just before World War Two, an immense ship was found under a large mound on the Pretty estate in Suffolk. Evidently, it was a burial ship for East Anglia royalty and a treasure trove of artifacts was unearthed, including (according to Wikipedia) “a suite of metalwork dress fittings in gold and gems, a ceremonial helmet, a shield and sword, a lyre and a silver plate from the Byzantine Empire.”

Such a discovery suddenly acquired national importance and part of The Dig deals with the impact on those who found it. Basil Brown, a reserved, intelligent, working class and quietly rebellious man was resolutely put forth as the man deserving of accolades by the owner of the estate, Mrs. Pretty. Much of the film’s drama is played out by Ralph Fiennes’ Brown and Carey Mulligan’s Pretty; while observing all of the correct class conventions that divide them, their mutual respect and slowly flowering friendship provides the greatest emotional impact in the film. Just to reassure the producers and an audience always used to romance, Lily James plays a more conventional role: a badly neglected archaeologist who falls (at least briefly) for the charms of a handsome young cousin of Mrs. Pretty, performed by Johnny Flynn. Rather more interesting is the mentoring provided by Brown for Mrs. Pretty’s bookish young son, Robert.

It may be said that the film provides its own dig, into the class system that still held Britain back in the days leading up to September 1939. The Dig’s filmmakers are too polite to actually attack the unjust treatment of Brown and Pretty (and Lily James’s Peggy Preston) by Ken Stott’s Phillips, an ostentatious figurehead from the British Museum, who, of course, lands the artifacts and the glory for his famous institution. Despite this shortcoming, The Dig is a lovely, old-fashioned film, available on Netflix, that will provide a good restful evening’s entertainment.

What goes on in the human brain? Surgeons operate on it; philosophers speculate about its functions and psychologists try to penetrate its core. The lengthily titled Hungarian entry into the Academy Awards’ best foreign language film category, Preparations to be Together for an Unknown Period of Time, offers a deep look into the complexities of the brain while including elements we expect in films: romance, mystery and eroticism.

The film begins intriguingly enough with a woman arriving in Budapest expecting to meet her lover, who isn’t where she thought he would be. When she finally locates Dr. Janos Drexler, a prominent brain surgeon, he denies knowing her. As she collapses from shock behind his back, you’re left to wonder: what’s going on? Deceptively dreamily paced, the viewer follows the scorned Marta, or more formally Dr. Vizy, as she is hired as a brain surgeon at the same hospital as Drexler. This time they meet during a successful surgery conducted by Marta and the two soon start to flirt with each other.

Preparations to be Together for an Unknown Period of Time spends a lot of time observing Marta as she acclimatizes back to life in Budapest—she’d been living successfully in the U.S. for 20 years—and becomes friendly with a student whose father is the recipient of her successful operation. In a brilliant scene, Janos seems to be following Marta on the other side of the street until he disappears when a truck cuts off her view of him for a minute. Did he go down another street? Or was it a fantasy?

Adding to the confusion around their purported affair, which prompted Marta’s move back to Budapest, the two were at the same medical conference a month previously, but there is no solid information to show that they met then. Marta admits to her new psychiatrist that she tends to fantasize, a fact that she also acknowledges when her best friend from New Jersey shows up in Budapest to attempt to bring her back to the States.

Throughout the film, and in particular when Drexler talks about his new book, there are philosophical thoughts about what the brain is capable of doing. Director and scripter Lili Horvat clearly relishes perplexing the viewer for most of the film with thoughts about the brain and romance. As for eroticism, there’s a sexy scene that might be real—or perhaps not.

In the end, the film does offer a plausible explanation for the mysterious goings on between Marta and Janos. Sadly, it turns the film’s final moments into something prosaic. Nicely shot and with a fine performance by Natasa Stork as Dr. Marta Vizy, Preparations to be Together for an Unknown Period of Time is a stylish film that may promise more than it delivers but is entertaining for most of the way. Worth seeing, though no masterpiece.