Film Review: Falling and The Two of Us 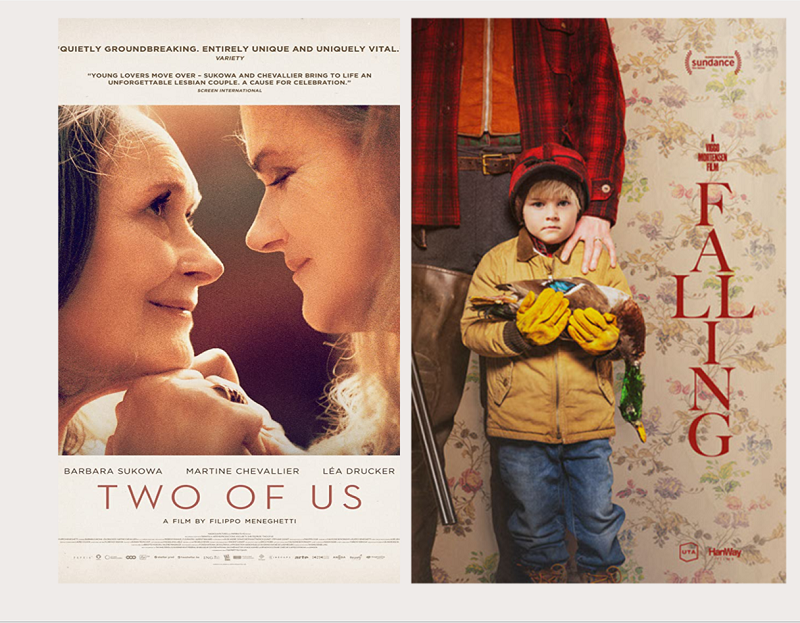 Falling and The Two of Us

For many people, the most complex relationships they have in their lives are with their parents. If you want to find out a lot about a person you’ve just met, just ask them about their moms and dads—you’re sure to learn a lot. So the potential audience for Viggo Mortensen’s evidently heartfelt Falling, a complex father and son film, is boundless.

Mortensen, who co-stars in the film as John Peterson, the gay son of Willis (played by veteran thriller actor Lance Henrikson), has an especially troubling situation to negotiate. Over the decades, Willis has gone from being a friendly outdoorsman and loving father to an embittered, violent, and sexist old man. John, on the other hand, has rejected his patriarchal past, coming out as gay after years as a member of the military. When Willis arrives to stay with John and his husband Eric (played by Asian actor Terry Chen), the old man’s racism comes to the fore as he continually finds it hard to remember his son’s lover’s ethnic origin.

It’s no surprise that Willis’ memory is in doubt. Exacerbating the tension between him and John is the reason for his visit to California: he is suffering from dementia and has to leave his farm in upstate New York to be close to his family. John’s sister Sarah (a brilliant as always Laura Linney) lives nearby but Willis’ absolutely dreadful relationship with his daughter is played out in a darkly comic family lunch, which quickly descends from a friendly get-together into verbal abuse and an eviscerating shouting match.

Though John is stung with as many upsetting slurs as Sarah, Mortensen refuses to fight with his father, consistently taking the high road. In flashbacks, we see that the young Willis (played well by Sverrir Gudnason) was quite sweet to John as a boy, something he never was to Sarah. That gives a psychological resonance to Mortensen’s performance, which is far more tender than he generally exhibits in his films. Henrikson, too, has to go beyond his stereotypical role as a monster (he was the lead in the notorious horror film Pumpkinhead), and offer depth to his performance. After all, if the audience doesn’t care about Willis and John, the film falls apart.

Falling is a hard film to love. There’s so much anger in the character of Willis that finding sympathy for him—especially after four years of Trump supporters being free reign to our south—is tough to do. But Mortensen is so evidently sincere in his belief in a possible redemption of someone like Willis Peterson–and he and Henrikson do create fireworks as son and father–that one ends up admiring Falling. If you’re up for tough love, Falling is a good watch but the film is certainly not for everyone.

Barbara Sukowa’s Nina and Martine Chevalier’s Madeleine, the titular women in The Two of Us, seem invisible to most of us because they’re old females, and who watches them? That kind of thinking is hateful but for Nina and her “Mado,” it’s actually been working out for them. Lesbian lovers for decades, they now live across the hall from each other in an apartment building in a small town close to Montpellier in France. Their personal circumstances are different however: while Nina is committed totally to her relationship with Mado, her lover is a mother of two adult children, who think that their late father was the love of her life.

As the film begins, Nana convinces Mado to tell her daughter, Anne, and son, Frederic, about their long love affair so they can understand why the two want to sell their apartments and move to Rome. When Mado can’t tell them, the two have a fight and later that evening, Mado has a stroke. Suddenly, everything changes. Nina has to figure out how to spend time with Mado because she now needs a caregiver to live with her. Filippo Meneghetti’s inventive debut feature switches gears, from romance to comic thriller to melodrama, as Nina fights to stay in her lover’s life while Mado is in the most vulnerable position she’s ever experienced.

While the narrative in The Two of Us is compelling, what propels the film into something moving are the performances by Chevalier and Sukowa. Chevalier, who has carved out a brilliant theatrical career at the Comedie-Francaise, is the revelation for an international audience as she shows a devastating ability to convey at a glance what is going on in her internal life after the stroke. The German theatre and cinema actor Sukowa, famous for her work with Fassbinder (Lola, Berlin Alexanderplatz) and von Trotta (Hannah Arendt, Rosa Luxemburg), is forceful, manipulative and romantic as Nina.

The two of them makes us interested in The Two of Us. This is a great Zoomer film and decidedly worth seeing.