Film Review: Judas and the Black Messiah and Land 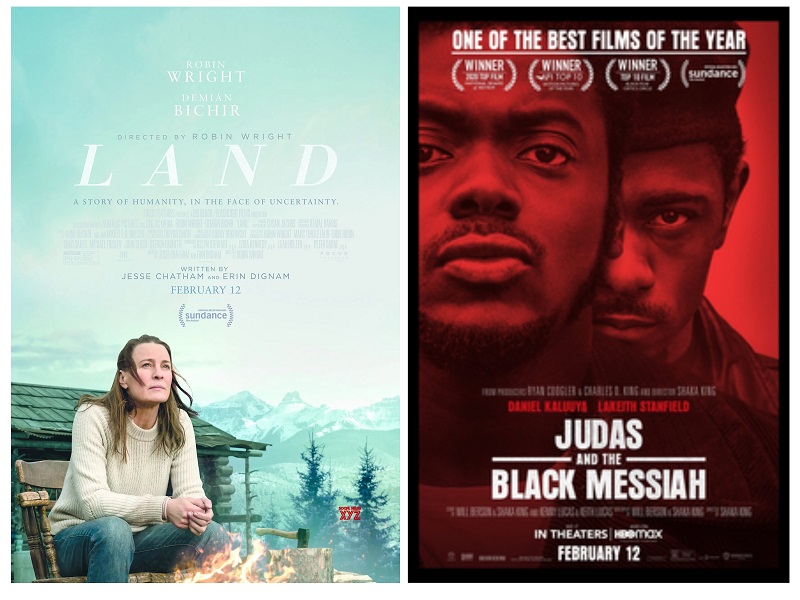 Judas and the Black Messiah and Land

Judas and the Black Messiah

Judas and the Black Messiah

Zoomers who love the Sixties enjoy recalling the fashion, the music, the politics and the outlandish behaviour of the times. Tragedies are remembered, of course—the assassinations of the Kennedys and Martin Luther King—but how many recollect the death of Fred Hampton? Many don’t, because Hampton, a 21-year-old Black Panther, was assassinated by the FBI and the Chicago police in a successful attempt to get rid of him before he could become famous.

It turns out that Hampton’s killers were only successful for 50 years. With the release of Judas and the Black Messiah, Hampton’s story is at last on screen for generations from the Zoomers to today’s radicalized youth to see and appreciate. Brilliantly researched and cast, the film immerses viewers in a journey through Chicago, where impoverished Blacks, Latinos and Whites were venting their anger in merciless expressions of violence while the city’s Establishment, which beat up idealistic activists during the Democratic Convention in ’68, continued to fight back against all organized attempts to upset the status quo.

A major figure in the cauldron of brutality of Chicago at that time was young Fred Hampton, who had quickly become the Chairman of the city’s radical Black Panther party. A fiery orator, he galvanized the mixed population of West Chicago while reaching out to the Blacks in the Southside. Like Martin Luther King, Hampton saw the battle taking place in the streets of America as being not only about race but, just as importantly, about class. In 1969, he was able to create a Rainbow Coalition, bringing together the Puerto Rican Young Lords, the white Appalachian Young Patriots and the Panthers into a sizeable anti-Establishment force against Chicago’s boss mayor Daley, his terrifying police force and J. Edgar Hoover’s FBI.

Judas and the Black Messiah isn’t just a radical screed about Hampton’s tragic, memorable life. Its plot is fascinating, truthful to history, and allows the power struggles that were on-going at that time to be played out lucidly. Hampton’s Panthers had a Judas, someone in the employ of the FBI, whose existence wasn’t exposed until years after the assassination. William O’Neal was a car thief and FBI impersonator who was turned by Roy Mitchell, a bright light in Hoover’s organization, into an informant. Young, black and charismatic, O’Neal became one of Hampton’s best friends and a security chief for the Panthers.

The script emphasizes the tension between O’Neal and Hampton and the consequences, which would surely end with death for one of them. Though we know how the story ends, the performances of Daniel Kaluuya and LaKeith Stanfield as, respectively, Hampton and O’Neal are top notch, keeping each scene suspenseful and meaningful. Kaluuya, who was brilliant in Get Out and Black Panther (the superhero blockbuster), is clearly a star and after this film, so should Stanfield, who was funny and charismatic in Sorry to Bother You.

The two actors are joined impressively by Jesse Plemons, who is chillingly cynical and racist as FBI man Roy Mitchell and Dominique Fishback as Hampton’s lover and fellow Panther Deborah Johnson. Director Shaka King has worked with these rising young actors and a talented crew, who were able to masterfully evoke the furious, divisive time that brought Hampton to the edge of critical relevance only to deny him everything, even his life.

Judas and the Black Messiah is not a pretty film but it’s compulsive viewing and absolutely worthy of being seen. This is a powerful, relevant piece of cinema, which should resurrect the name of Fred Hampton in this era of BLM.

Though she directed and starred in it, Land is far more than a vanity project for Robin Wright. In a tale replete with quiet despair and self-sacrifice, her film has to be perfectly lucid and balanced or it will descend into melodrama. Land hangs onto its quietly lofty ambition of being a tragedy by refusing to pander to the audience by revealing too much about why Edee (Wright), a woman from the city, would decide to move alone to a remote cabin in Wyoming.

Though we don’t know exactly why, we’re quickly immersed in Edee’s situation. She couldn’t be less prepared for the self-sustaining life of an outdoors woman. Edee has never hunted, isn’t much of a farmer and can barely catch a fish. After her cabin is raided by a bear, she loses her supplies and is reduced to near starvation as winter hits its peak.

Happily for her, she receives a nearly divine intervention through Miguel, who saves her life and over the next year and a half, teaches her how to live in the woods. There’s little conversation between them but it’s easy to see how they grow to like and admire each other. Through the acting and placement of the characters in critical scenes, it’s understood that the two are engaging in something profound—not a love affair but a way of learning how to survive after tragedy has hit.

Though there’s not much dialogue or an easy way of entering the characters lives, Land isn’t a frosty art film. It’s accessible throughout and allows the audience to care more about Edee and Miguel than they do about themselves. Robin Wright has made a remarkable film, one of emotion and beauty. It’s well worth seeing—and dare I mention that the leads are both well above 50 and still looking remarkable?