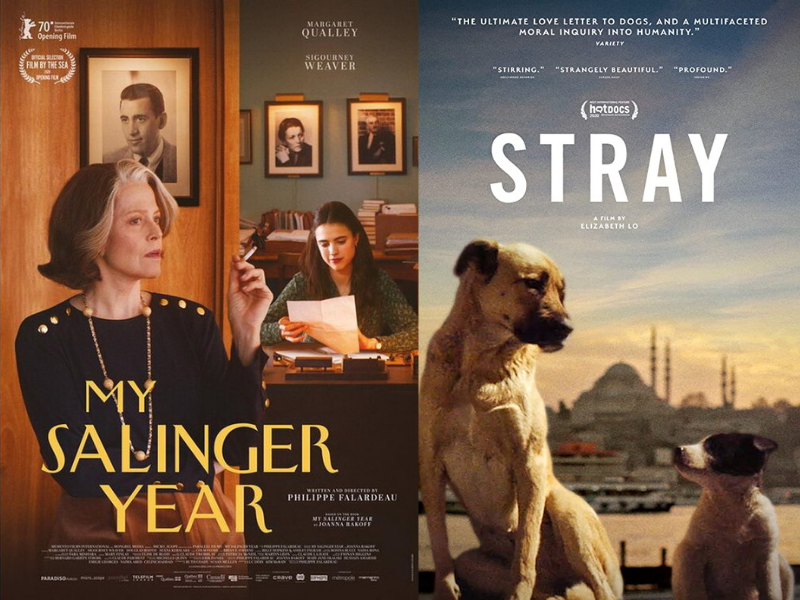 My Salinger Year and Stray

Can you make it in the Big City?

Philippe Falardeau, director and scriptwriter based on the memoir by Joanna Rakoff

Starring: Zeytin and featuring Nazar and Kartal and Jamil, Halil and Ali

Available to rent March 5 on the Apple TV app/iTunes and other VOD platforms. Or to rent on virtual cinema: Hot Docs at Home (March 11 across Canada).

Joanna Rakoff is the type of urban sophisticate whose love of literature is the preeminent obsession in her young life. She drops out of school at Berkeley, as her filmic memoir begins, in order to live in New York and write poetry in cafés. She’s charming and has a preppy bookish look, which makes her an almost inevitable choice to be hired by an old-fashioned literary agency. Soon, she’s dumped her old boyfriend and found a new one, who is working on a novel while working in a left-wing bookshop. But that’s not her only new relationship. It seems that the agency she’s working for has a famous client, with whom she has to interact on the phone: J.D. “Jerry” Salinger.

If the presence of the author of “The Catcher in the Rye” offers a glittering mysterious presence to Joanna’s life, her boss Margaret shows her that the literary world can be sharp and pragmatic. One of Joanna’s tasks, reading all of Salinger’s fan letters and sending coolly professional notes back, dashing their hopes, is hard on her. (Dramatic readings of the letters by the purported writers offers a bit of fantasy to the film.)

Contrasting Joanna’s ideals with Margaret, a sharp and truly cultivated New Yorker, makes for some humorous moments, but we’re not in the over-the-top terrain of The Devil Wears Prada.
My Salinger Year is easier fare although Joanna does have to deal with a gradually more wretched lover and a growing realization that she’ll have to choose between poetry and being in an agency. After all, Jerry has advised her to write every day in order to nurture her talent.

Quebecois director Philippe Falardeau, most famous for the Oscar-nominated Monsieur Lazhar, is evidently taken in by the dreams of Joanna Rakoff. In one scene, she gets to deliver a package to the New Yorker, the kind of dream task only a neophyte lover of the world of lliterature would embrace. (Later, at a party, she meets two workers at the New Yorker, who invite her for a tour.) Falardeau uses his directorial eye to evoke the look of offices inhabited by
mid-century publishers and agents: old wooden desks, books on shelves everywhere, photos of famous authors like Fitzgerald and Dylan Thomas. Eccentric agents and literary figures are part
of Joanna’s and Margaret’s world; they offer charm but absolutely do their work. A very worldly relationship between Margaret and Daniel is treated with proper respect, though it is scandalous.

A film like My Salinger Year is reliant on great casting. Margaret Qualley (Andi McDowell’s daughter) is turning into a rising star: she’s perfect in the lead role. Sigourney Weaver, a true sophisticate, is marvellous as Margaret: she’s properly tough, irreverent and witty. Hovering over the picture is Salinger, who is treated as both a funny figure and a nearly god-like one. Of course, we never see him but he’s heard to telling effect.

I must admit, when I was in my 20s, I harboured dreams similar to those of Joanna Rakoff. My Salinger Year is a film for me and others, who hold the New Yorker and ancient publishing companies in the highest esteem. But the general public may find My Salinger Year a tad too precious for their liking. This gentle film is unlikely to be a hit and that’s a pity.

“Dogs and philosophers do the greatest good and get the fewest rewards.”—Diogenes

Although Elizabeth Lo uses the ancient Greek philosopher Diogenes’ quotes about canines throughout her film, it’s not entirely clear why she decided to make a film about stray dogs in
Istanbul. It may be because Istanbul’s official policy about them has changed so radically over the past century, from trying to eliminate them altogether to legally being forced to leave them
alone now. Is that what happens to philosophers, too? Political winds in Turkey have affected western leaning philosopher in Istanbul but it’s unlikely that they’ve ended up homeless, on the
streets. Some may have been exiled though.

Politics quietly lurks around the edges of Lo’s festival hit Stray, which is now is available to rent in Canada. Although we may be watching dogs, it isn’t surprising that they turn up at women’s
rights marches, flummoxing everyone by making doggy love on the streets. Nor are we frightened when Syrian refugees who love them are treated worse than their canine friends. What we see is Istanbul through the eyes of the ultimate flaneurs, a whole species of animals who like to walk and observe the city and its dwellers much like essayists and philosophers.

Stray has a protagonist, Zeytin, a tan mongrel with a black beard and piercing eyes. Zeytin never hurts anyone and apart from one alarming barking fit, he calmly travels through a diverse
area of Istanbul, filled with food markets, a square with fairground attractions, cobble stoned streets and a very pleasant beach. Lo follows two of Zeytin’s pack, a black medium height dog
named Nazar and the very cute black and white Kartal. Besides playing with each other, the dogs usually are friendly enough with people to be treated nicely and fed occasionally.

As a film, Stray is a novelty. It’s rare to see a city and its people from a dog’s perspective. Lo has surely succeeded in giving us Istanbul down low and funky (there’s garbage everywhere).
Probably the highest accolade Stray received at a festival was the best International Film at Hot Docs in 2020. Those who choose to view it will be entertained in surprising and subtle ways.