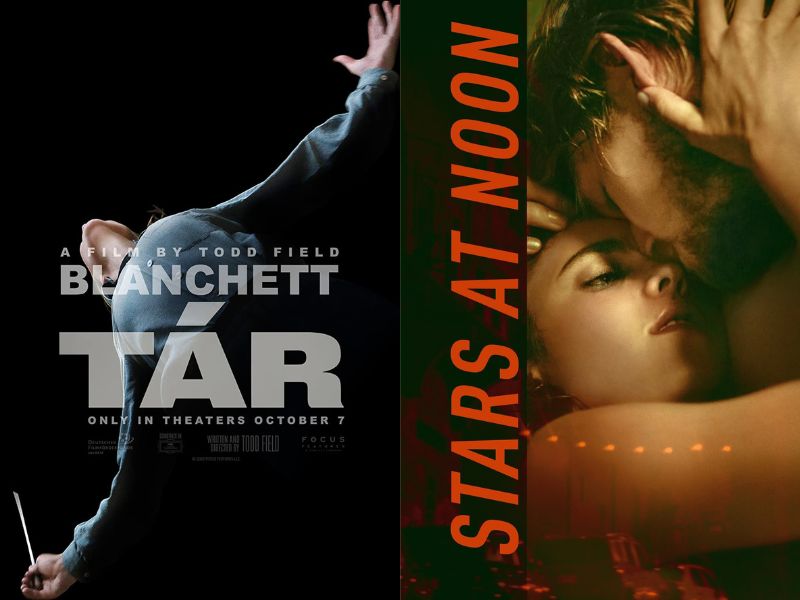 Tar could well be the best film of the year—we can discuss that in January–but one thing is certain: it’s the most important one for the Classical 96 audience. After all, how many narrative films are made about classical music and musicians in a year, or even a decade?  Precious few—and most are not made by exceptional talents.

Tar was deservedly nominated for the Golden Lion at the Venice Film Festival and Cate Blanchett won the Volpi Cup for Best Actress as the controversial orchestra conductor and composer Lydia Tar. That’s the big leagues. You’d have to go back nearly 40 years to the 1984 Oscar-winning Amadeus to find another film on classical music with the same amount of prestige attached to it as Tar.

The film starts brilliantly with an on-stage interview conducted by acclaimed New Yorker and Canadian journalist Adam Gopnik with Lydia Tar about her extraordinary career. It’s just one of many coups by the film’s writer-director Todd Field, creating a mock documentary sequence, which gives us Tar’s backstory as a protegée of Leonard Bernstein, Mahler expert, and such a distinguished female conductor that she can comment on the gladdening movement towards gender equity in her role without seeming self-serving.

We see that Lydia Tar has an immensely self-assured presence—and that’s Field’s strategy, which is to show us an enigmatic, powerful and famous artist while holding back about her intimate feelings and motivations. For much of the film, we observe Tar as she negotiates a career that’s the equivalent of Dudamel or Rattle or Chailly: traveling from one impressive performance to another, working out the logistics artistically and strategically, while making beautiful music everywhere. You realize that she is performing a huge job even if it is glamourous and prestigious, and that people can be angry or hurt by her decisions.

As Tar unfolds in one beautifully shot scene after another, all set in gorgeous apartments or concert halls or restaurants, we see the private life of an artist, Lydia Tar, moving from Berlin to New York, dealing with her lover, Berlin’s concert master Sharon Goodnow (Nina Hoss), their beloved adopted daughter Petra (Mila Bogojevic) and difficulties with her assistant conductor Sebastian (Allan Corduner) and her own assistant Francesca Lentini (Noemie Merlant).  Although there are scenes of Tar conducting her orchestra—and she’s clearly passionate while doing so—it’s not art that the film is dramatizing. It’s the personal life of Lydia Tar that makes her story compelling.

Although her career is working well, Lydia Tar’s life, as shown by Cate Blanchett’s impeccable performance, has immense problems, which she is denying. Although we never see it explicitly, the story makes it clear that Lydia has had affairs with protégées and that the most recent one has ended tragically, with a young woman committing suicide. While this tale is unfolding, a relationship with a young Russian cellist Olga Metkina (Sophie Kauer) is taking place under the nose of the Berlin Philharmonic’s concert master and Tar’s partner, Sharon. And Tar’s assistant Francesca finds herself cut out of career advancement due to her problematic relationship with the conductor. In this current climate, Tar finds herself having to make tough decisions in order to continue her career.

Todd Field’s Tar has the depth and artistry of a finely wrought tragedy. Every scene is finely measured to achieve the greatest possible effect. The story of Lydia Tar wouldn’t be worthy of his effort if the conductor’s hard work and artistry wasn’t clear throughout the film. The music is brilliantly showcased, whether it’s Mahler’s Fifth or Elgar’s Cello Concerto. And the original compositions by Oscar winner Hildur Guðnadóttir fit in superbly. As for Cate Blanchett, her performance is impeccable. She’s already won the Volpi in Venice and Blanchett will definitely get an Oscar nomination—and likely, a win.

What’s fascinating about Tar is the high regard that people (and this critic) feel toward the conductor/composer even as we realize that she is a narcissistic individual. How much does morality matter when you’re a genius at what you do? Is art enough? Or in these new woke times, does Tar have to lose her career? These are important questions in a brilliant film.

While watching Claire Denis’ uneven but intensely enjoyable espionage thriller Stars at Noon, it’s hard to imagine what the film would be like without the compelling performance of Margaret Qualley as Trish, a slightly unhinged aspiring journalist in an authoritarian Central American republic. Very quickly we know three things about this hardly Ugly American: she wants to write honestly about the situation, speaks Spanish excellently and drinks to excess. No one takes her seriously, which upsets her enormously, and she’s dead broke. That’s led her to renting out her body but not her soul, in the manner of Sally Bowles in Cabaret and Holly Golightly in Breakfast at Tiffany’s. We understand her pain and know that she’s still pure enough to embrace love and some semblance of control if she can find it.

Denis’s point of view is atmospheric and emotional: we’re made to understand a decaying and corrupt society—from cops to cab drivers—which has been bought and sold, leaving the people upset but incapable of making a change. The underlying hysteria in Trish may in part be due to her appreciation of the difficult reality of a population that she has come to enjoy with the exception of a corrupt policeman (Danny Ramirez) who exploits her whenever he can. Trying to write articles to effect change but dismissed by her editor (John C. Reilly), Trish is at the end of her rope when she meets Daniel (Joe Alwyn), a handsome British oilman, who can pay for her services, though after a while she wants his love, not money.

Denis creates a cosmopolitan sensibility in which journalists and spies and big business operatives work in seductive but powerless countries ripe for exploitation. She’s working in a genre which goes back to such ’40 noir classics as Graham Greene’s The Third Man and Eric Ambler’s The Mask of Dimitrios but is best expressed by the exemplar of the form, Peter Weir’s The Year of Living Dangerously (1982). In all of them, the glamour of the locale is undercut and betrayed by the lethal threats that they’re forced to confront.

Denis goes beyond the previous scenarios, forcing our uncertainty about Trish and her understanding of the country’s reality to allow us to question what is happening politically. Is the country about to become right-wing? We never know as Trish and Daniel, continuously threatened, decide to leave the country. Much of the film revolves around them: the  emotional American and her quiet cool handsome British lover. But Qualley’s Trish is always exciting and committed while Alwyn’s is a cipher until he is unsurprisingly revealed as someone who has a skill in dealing with the expectations of governments and conglomerates. Perhaps most interestingly, Trish says to him after a wonderful bout of love making, “It’s like being with a cloud.” Indeed.

Pretty soon people are going to stop identifying Margaret Qualley as Andie MacDowell’s daughter and simply realise that she’s an exceptional actor. It’s almost too easy to point out that Qualley is the superior performer since such comparisons are unfair to both of them. Let’s just say that Qualley has been showing off her versatility for quite a while in such films as Quentin Tarantino’s Once Upon a Time in Hollywood as a very sexy teenybopper and as a sincere book editorial assistant in My Salinger Year. She deserves our respect and admiration.

As for Denis, this is a fine film but not her English language breakthrough. The major problem with Stars at Noon is that we don’t understand what exactly is wrong in the country Trish is living in (presumably Nicaragua) and if life will be better elsewhere (Costa Rica?). It’s a film that needs to have a political agenda. Just like Joe Alwyn’s Daniel, with Claire Denis’ Stars at Noon, you feel that you’re dealing with a cloud, not reality.