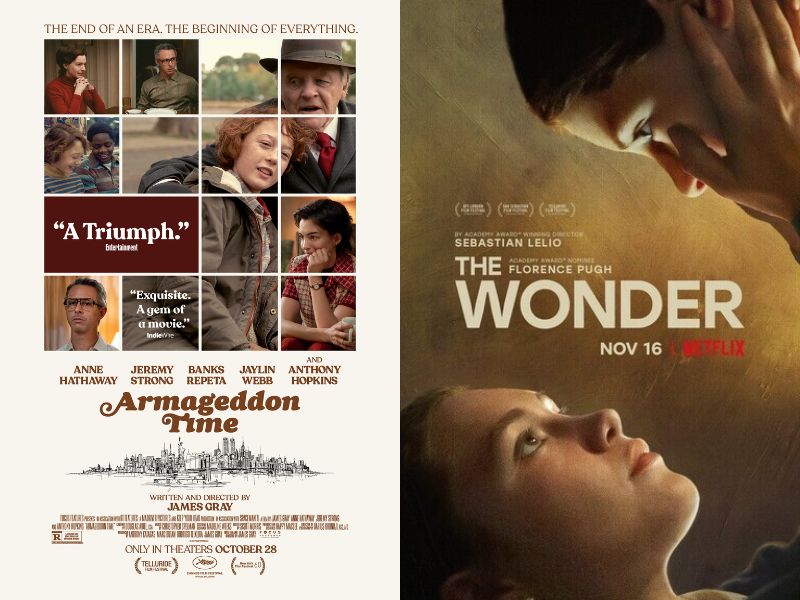 The Secret Lives of Children

Film Reviews of Armageddon Time and The Wonder

Set in Queens, a never fashionable borough of New York in the not very fancy 1980s, Armageddon Time is a unique coming-of-age film in this era of Marvel and Disney epics. It’s so rare to see a feature with a youth who doesn’t have superpowers, one has to wonder, how did a well budgeted film with stars in major roles appear in it? For film aficionados, the reputation of James Gray may suffice as an answer but to many, that response will provoke another query: ‘who did you just say’?

Armageddon Time is a personal project for Gray, who grew up Jewish in Flushing, Queens in the ‘80s. He’s a stylish and highly intelligent writer-director who rose to prominence at the age of 25 in 1994, with his first feature Little Odessa, a noir drama set in Brooklyn, starring Tim Roth, Vanessa Redgrave and Maximillian Schell, which won the Silver Lion at the Venice Film Festival. Since then, he’s made a number of quirky romantic fables with people searching for themselves in dark action-filled dramas starring such talents as Marion Cotillard, Joaquin Phoenix, Mark Wahlberg, and Eva Mendes: The Yards, We Own the Night, Two Loves, The Immigrant. Gray has followed those critically acclaimed pieces with two bigger budgeted efforts, the historical Africa adventure epic The Lost City of Z, with Charlie Hunnam and Robert Pattinson and Ad Astra, a sci-fi drama with Brad Pitt, Tommy Lee Jones, Donald Sutherland and Ruth Negga.

So, James Gray has paid his dues and taken the chance to make a film about, well, himself. In Armageddon Time, the boyhood of a prepubescent Jewish lad, who loves to draw and dream, is played out in scenes that are, in the main, coolly evoked. There’s little nostalgia in the film apart from the boy’s love for his grandfather. You see Paul Graff’s varying relationships with his family ranging from adoration for his granddad Aaron (marvellously performed by Anthony Hopkins) to anger towards most of his teachers and classmates as well as his brother, Paul. Gray presents a more nuanced depiction of Paul’s communications with her parents, Esther (an effectively deglamorized Anne Hathaway) and Irving (Succession Emmy winner Jeremy Strong) who love but don’t understand him. It becomes clear that Paul feels the same way, but he not only doesn’t know who or why they are, he feels the need to conceal his thoughts from them.

Paul hates public school–the teachers and most of the class—but he does have one fellow rebel, the other outsider, a Black kid named Johnny. The two are the class clowns, making fun of the teacher, who quickly despises them. When “Turkey,” their nickname for the teacher catches them smoking marijuana in the bathroom, the boys are expelled, forcing Paul to go to Kew-Forest private school, the same institution where Donald and sister Maryanne Trump attended, and notorious father Fred served as a Board member. Yes, that really happened to Grey, who includes a strident speech he remembers about seizing economic opportunity in free market America delivered to the student body by Maryanne, already a successful lawyer, and brilliantly played by Jessica Chastain.

While Paul tries to adjust to his new regimented aspirational institution, so different from the chaotic, indifferent atmosphere in New York’s public school system, Johnny is struggling just to survive. The two quietly keep up their friendship, with Johnny occasionally staying in the makeshift coach house/cabin in Paul’s backyard. Then, at Paul’s instigation, they try to pull off a robbery, for which the consequences are far graver for the Black child than for the white one.

James Gray has made a quietly political film disguised as a reminisce. Armageddon is the word that Ronald Reagan, elected President to the dismay of Paul’s family, uses to evoke fear in the American population. For Reagan and his followers, Armageddon can mean anything from a nuclear war with the U.S.S.R.—remember, this was still during the Cold War—to the rising power of the Middle East due to their oil reserves and even the uneasy economic situation in the U.S. caused by inflation. Racism, supposedly beaten in the ‘60s, was again on the rise as was a renewed belief in the military and police. With the chilling addition of the Trumps to the mix, it’s clear that the liberal post-Watergate America was doomed, starting in the ‘80s and continuing through to today.

The most beautiful aspect of Armageddon Time is young Paul’s respect for his grandfather. Anthony Hopkins gives a fine performance as Aaron, a European Jew, still grieving the loss of so many friends and relatives during the Holocaust, but he still holds onto his idealism and belief in supporting the underdog in every situation. There’s a lovely moment when Paul launches a toy rocket ship in a park with his grandfather, which shows how precious a bond can be created between an older generation and a younger one.

Armageddon Time is an intimate film, replete with small pleasures: two boys goofing around, a family dinner filled with squabbles and broken conversations, a lad and his grandfather talking truly to each other in a bedroom late at night. It’s a film well worth seeing, a quiet piece of art amidst the clamour of booming blockbusters.

Emma Donoghue, co-script (w/Alice Birch & Lelio) based on her novel

It’s 1862 in Ireland, not so long after the Great Hunger, when an English nurse, Lib Wright, is hired by a group of priests and village elders to deal with a situation that has shocked and galvanized the whole region. A nine-year old girl, Anna O’Donnell, hasn’t eaten anything in four months and yet she’s alive, apparently thanks to her belief in the Saviour. The people in the area are flocking to see her, their Miracle Girl. But not all of the gentry are convinced, so Lib has been hired to observe the truth. With a nun to spell her for eight-hour periods, Lib, a veteran of the Crimean War, is there to verify Anna’s claims or find out how what is actually taking place.

That’s the fascinating setup for The Wonder, a film that explores faith, love, abuse, hypocrisy and families. It’s a tale perfect for the time of Dickens and Florence Nightingale, believers in science and logic in the beginning of the modern age, working to dispel the superstitions of the past.

Lib is English, a Protestant one supposes, and not someone who believes in miracles. She’s out to prove that Anna is lying and, after getting to know and like her, wants to know why. Lib is aided in her investigation by William Byrne, a British newspaperman, who knows a good story when he sees it and wants to get the scoop on the Irish girl. While some members of the local establishment must quietly agree with Lib’s and William’s scepticism, there are members of the clergy and more conservative elements in rural area who would prefer—and may need—to have their lives reinforced by a miracle.

So, it’s faith versus science but the story is more intimate and personal than that. The human drama in The Wonder is about the fate of a little girl. Will she have to die to prove a religious point? And is there more behind Anna’s hunger strike than a young girl’s desperate plea for attention? Needless to say, there are many secrets revealed in The Wonder; this is, after all,  the mid-19th century, a time for such revelations.

The Wonder is a vehicle for one of Britain’s rising stars, Florence Pugh, who plays the pivotal role of nurse Lib Wright. Pugh first attracted critical attention at the age of 20 as the relentlessly vengeful Lady Macbeth (based in part on the Leskov novella and Shostakovich opera), which was written by Alice Birch, the co-scenarist of The Wonder. Since 2016, Pugh has scored successes in such disparate parts as the feisty wrestler Paige in Fighting for my Family  the disturbed psychology student in the cult hit Midsommar and the resilient Amy March in the very successful Greta Gerwig version of Little Women. Pugh is terrific as Lib, a tough but compassionate figure, who can bend a group of old Irishmen to her way of thinking but also feels warmth and pity for a bedeviled girl.

Accompanying Pugh in the cast are Tom Burke as the journalist attracted to Lib for more than a story and, most significantly, Kila Lord Cassidy, as the compelling hunger artist Anna. Kila’s mother in real life and the film is Elaine Cassidy, who was memorable as the title character in Atom Egoyan’s Felicia’s Journey (1999), playing a figure who was all too vulnerable to a sexual attack. A generation later, it’s ironic that Kila, too, is someone with secrets to hide in another drama with psycho-sexual implications.

The Wonder is a compelling film, one fully in keeping with the novel by the Irish-Canadian writer Emma Donoghue. Like Room, Donoghue’s huge success as a novel and a film, The Wonder has dark issues to be revealed but that doesn’t prevent an unlikely but very happy ending to take place. And perhaps that’s the most brilliant thing about Donoghue: her conclusions feel deserved, not imposed by publishers or producers. They’re simply the way that life can turn out if people finally get the luck they deserve.

Should you see The Wonder? Yes: for Donoghue’s story, for Pugh, and for the Cassidys. If not in a theatre, then soon on Netflix.