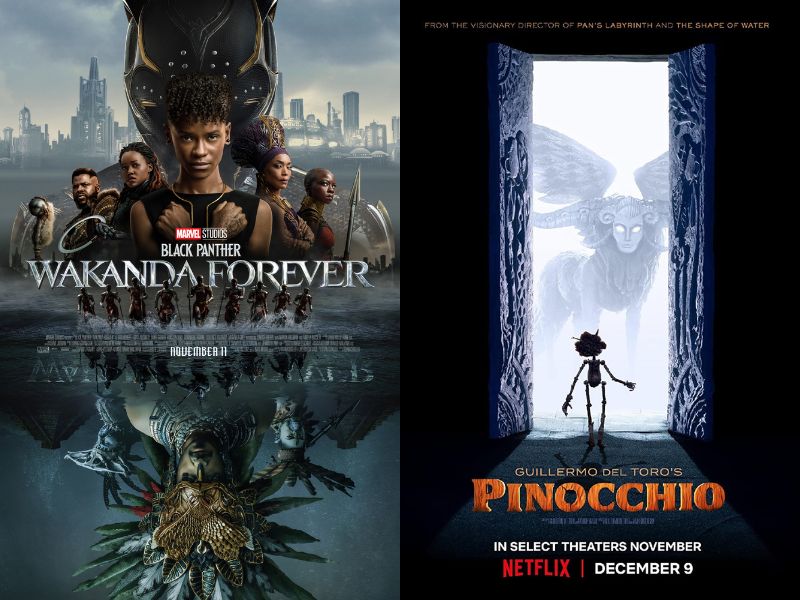 When the lead actor in a film or TV franchise decides to leave a series, producers generally replace the player no matter how popular they may have been. There have been plenty of James Bonds since Sean Connery and Dr. Who successfully became a woman in a recent incarnation. So, it was a brave move by Ryan Coogler and the MCU (Marvel Cinematic Universe) team to honour the late Chadwick Boseman by not immediately replacing the Black Panther in the blockbuster sequel to their 2018 hit. Instead, the opening scenes in Black Panther: Wakanda Forever are suffused with anxiety and grief as the Boseman character, T’Challa, the King of Wakanda aka the Black Panther dies and is buried up in the skies in a ritual ceremony. It’s a unique way to start any film and, in particular, an action-based one.

Coogler takes plenty of chances in Black Panther: Wakanda Forever and he’s to be commended for doing so. Most filmmakers would avoid risks with a potentially billion-dollar grossing production, but Coogler has taken many. Besides acknowledging the Black Panther’s death and claiming for most of the film that Wakanda no longer needs one, the film stars a plenitude of Black female actors, with the only major male roles being a potential villain—the aquatic Namor—and an old Wakanda rival, the rural tribal leader M’Baku. That’s “woke,” and could work, but it might alienate some old-fashioned audience members. There’s also a total absence of romance in the film, which so often drives plots or provides at least a useful distraction in many thrillers.

Kudos to his daring, but has Coogler gone too far?

The storyline is interestingly complicated and should keep audiences engaged. Like the first Black Panther film, it works as a series of metaphors for the way global forces work today. Wakanda’s power resides in its control of vibranium—think oil, but with a nuclear resonance—a metal, which only exists in their country. Or so they think. The CIA has employed a very young Black MIT student to find vibranium elsewhere and it turns out to exist in the ocean. Which leads, finally, into the film’s epic plot.

The other location for vibranium is in the Atlantic Ocean, in an astonishing underwater city, Talokan, controlled by a mutant demi-god named Namor. (Marvel fans will know that other iterations of Namor are called the Submariner, an equivalent of the DC universe’s Aquaman.)

In the film’s most terrifying sequence, the Talokans take on a US ship and utterly destroy it. When Namor contacts the Wakandans, he does so in a highly aggressive way, kidnapping Shuri (Letitia Wright), their Princess, the sister of the last Black Panther, as well as the CIA recruit, Riri Williams. Though the Queen (Angela Bassett) is understandably afraid for her daughter, it soon becomes clear that Namor wants an alliance with the Wakanda nation.

In what is the most poetic and historically disturbing section of the film, Namor reveals to Shuri his history and that of his people. They were Mesoamericans, the true Indigenous people of Central America, who were captured and brutalized by the Spanish conquerors. In desperation, they escaped into the ocean, led by Namor, and eventually became a new aquatic race, free from the slavery imposed by their European conquerors. Namor tells Shuri that extraordinary tale and then takes her, in a genuinely magical sequence, to city of the Talokans, a futuristic metropolis, beautifully built for their glorious and happy people, including marvellously free children.

Namor then proposes an alliance between the Talokans and the nation of Wakanda, which, this reviewer will confess, sounds like a great idea. But there’s much more of the film that’s needing to take place—and, anyhow, Namor seems too bloodthirsty. So, a huge confrontation takes place—the battle necessary for any good MCU film to be popular—and so the Wakanda nation fights the underwater tribe of Talokans. This epic battle is the part that most upset Classical 96’s reviewer. Why should Mesoamericans and Africans engage in a battle to preserve a world run by the descendants of colonizers and imperialists?

Before Black Panther: Wakanda Forever reaches its satisfactory conclusion, there is plenty of time allotted to its extraordinary ensemble of actors. To little surprise, the brilliant Angela Bassett gives a mesmerizing performance as Queen Ramonda, and she is more than matched by Danal Gurira (Okoye), Florence Kasumba (Ayo) and Michaela Coel (Aneka). Cast in the most important role is Letitia Wright as Princess Shuri and, inevitably the next Black Panther. Can she carry the mantle? Only time and another film will tell.

Will Black Panther: Wakanda Forever be a huge success? I think it will be a hit, but not on the level of the first film. Given another chance, Letitia Wright’s quiet charm may keep the franchise going. Let’s hope so. Afrofuturism and the Black Panther identity rides on it.

The Mexican-Canadian artist Guillermo del Toro is the right person to create a new version of the classic tale, Pinocchio. His films are connected to fantasy and how works of imagination can relate to the real world. That’s been true for all of his famous films, from the dark and funny Hellboy through the brilliantly political Pan’s Labyrinth to the Oscar winning The Shape of Water. Now, with Pinocchio, he’s taken a story of a father’s love for his son and turned it into a moving piece of work.

Del Toro clearly adores the story of Pinocchio, the puppet who comes alive to take the place of a real boy. What makes the tale so appealing is that the father is a brilliant puppet maker, Geppetto, an artisan who can make the closest approximation of a boy, but only out of wood. To turn that beautiful piece of wood into someone alive requires magic, something that del Toro has always believed in, and that his audience worldwide can enjoy and embrace when it happens.

Del Toro has employed a master stop motion animator, Mark Gustafson, as his co-director on Pinocchio, and the duo worked together to create a dream team of brilliant crafts people with the help of Jim Henson’s daughter Lisa, to animate the project. So, this new version of Pinocchio is gorgeously rendered and is brilliantly voiced by a masterful group of actor including Ewan McGregor, Tilda Swinton, Cate Blanchett, Christoph Waltz and Ron Perlman.

But what about the story? Does this masterfully-made Pinocchio work? Del Toro has created an anti-authoritarian tale that should have resonance for us in this fraught political time. Geppetto loses his son Carlo in a bombing attack on their lovely mountainous village during the First World War and has to deal with Mussolini and his ilk during the second one.

Through the miraculous intervention of a Wood Sprite, Geppetto is able to bring a new boy to life. But the puppet Pinocchio is not Carlo, nor is he a real boy. Before the puppet maker and his son can work out their relationship, events intervene. A circus comes to town at the same time as the local administration begins to pay attention to the rebellious magical puppet.

If there are villains in the film, then they would be Podesta, the town’s long-time Fascist leader and Count Volpe, a carnival owner, who takes advantage of everyone around him, even his faithful monkey Spazzatura. Both want to exploit Pinocchio for their own gains—money for Volpe and glory for Podesta. But while the magical puppet is useful for Fascists and pernicious capitalists, Pinocchio wants to go back to his father, Geppetto, and be more of a real boy.

Before the story is complete, Pinocchio and Geppetto have to deal with sea beasts, Fascists and War. All are expected terrain for an auteur, del Toro, whose career is filled with stories and images of fantasy, horror, deep love and great despair. What is wonderful is that his tales resonate for a multitude of people of all genders and persuasions, who check out the world through their impulses, attitudes and tales. Del Toro’s access to his youthful imaginings is far stronger and more resonant than most of us, which is why we relate to them, and help to make his films so attractive to millions around the world.

Pinocchio is an odd film. Set in Fascist Italy, with an appearance by Mussolini, it can be disturbing some of the time. But it’s a del Toro film and will be understandably enjoyed by many, either in theatres or soon on Netflix. Though problematic and with an original soundtrack that hardly rivals that of Disney, del Toro’s Pinocchio will no doubt be seen by multitudes—and they won’t be wrong.