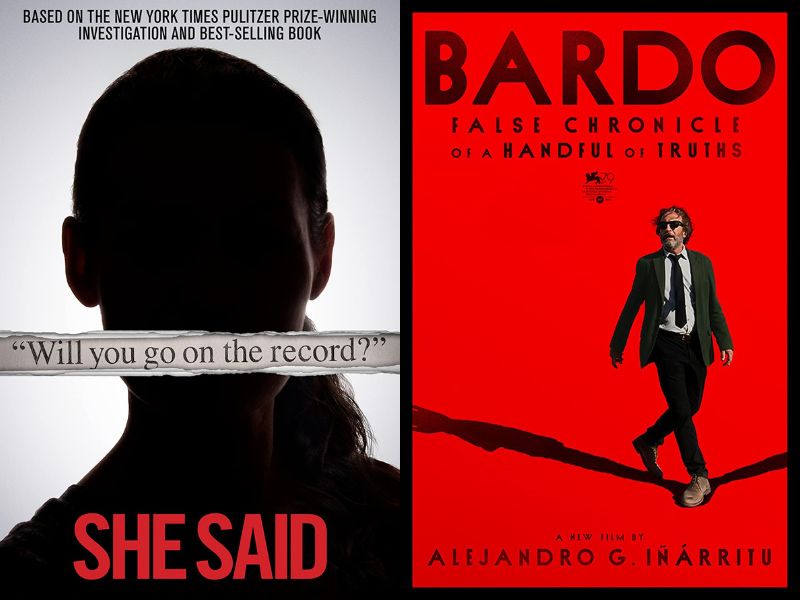 In dramas and docs, there is no substitute for being honest

Rebecca Lenkiewicz, script based on the book by Jodi Kantor & Megan Twohey

A fellow I know, a former newspaperman, thinks that films about journalists are almost inevitably flops. The problem, he says, is that there is no skin in the game. What will a newspaper writer lose if their big article goes south? Unless their life is on the line, why should anyone follow their story in a film?

That may be a problem for She Said, a film about two New York Times reporters, Jodi Kantor and Megan Twohey, whose investigation and published account of the sexual abuses committed by producer Harvey Weinstein was crucial in increasing the impact of the #MeToo movement worldwide. Make no mistake about it: their story is worthy material for a feature, yet something has bogged down between their articles, subsequent best-selling book and the film. Perhaps She Said is too long at over two hours or possibly we need to know more about the reporters, though we certainly get reasonable glimpses into their private lives. At any rate, what should be compelling material—this generation’s All the President’s Men—feels a bit too contained and pre-digested as a drama.

Though it doesn’t rise to the level of a classic, She Said is a very well-made film and deserves to be seen because of its importance politically and socially. Carey Mulligan and Zoe Kazan are excellent as Twohey and Kantor and their performances are matched by Patricia Clarkson as editor-writer Rebecca Corbett, Andre Braugher as editor Dean Basquet and in a surprising but brilliant bit of “casting,” Ashley Judd, playing herself, the celebrity who went public for the NYTimes writers. The film hits its peak when explaining how abuse worked in the stories of two former employees of Weinstein’s first company, Miramax, Laura Madden and Zelda Perkins. Both worked for Weinstein in London, which may explain their willingness to speak up for the Times faster than the many, many abused Americans actresses and employees.

As played by superb actors, Jennifer Ehle, as Madden, and Samantha Morton, as Perkins, we truly understand what happens when terrible things occur, when (in this film) a powerful man confronts you in a hotel room. It’s not just a matter of what happens physically, it’s the psychological damage that is just as crucial. One of the women says that “it’s about losing your voice just when you’re trying to find it.” She Said, at its best, is about testifying: finding the courage to name a man (in this case, Weinstein) as someone who has hurt them deeply and finally realizing that it’s valid to accuse such a person of wrongdoing instead of feeling guilt for “allowing” abusive behaviour to occur.

It’s important to realize that Twohey and Kantor won the prestigious George Polk journalism award for their writings and were Pulitzer Prize co-recipients (for the NY Times) along with Ronan Farrow in the New Yorker in 2017 for challenging the orthodox male hierarchy. She Said recounts their journey as newspaper reporters, investigators and women, who were able to effect real change in society through their work. This film is meaningful because it dramatizes their story and the ones of women who had the courage to stand up to abusers. It’s great that it was made and that so many people will have a chance to see it in theatres and start conversations about a societal change that is finally beginning to occur.

Bardo, False Chronicle of a Handful of Truths

You’ve got to hand it to Alejandro G. Iñárritu. There are few who can surpass Federico Fellini, but the Mexican auteur has outdone the Italian maestro numerically. It took Fellini one more film plus a co-directed feature to claim to have made 8½ movies. We know that 8½ made cinema history and is Fellini’s modernist masterpiece: its narrative about a director having an existential crisis is cinema’s equivalent of Joyce and Faulkner and Woolf. Let’s note that Bardo, False Chronicle of a Handful of Truths is only Iñárritu’s seventh film, so he has made his solipsistic feature—his 7— faster than Fellini. But is it better than the work of El maestro?

Unfortunately, I would suggest, Bardo is no classic; it doesn’t come close to the acclaimed classic 8½. But it’s fair to say that the immensely talented Iñárritu, working with the brilliant cinematographer Darius Khondji (Armageddon Time, Uncut Gems, Okja, The Lost City of Z, Midnight in Paris) has made an intense and wonderfully crafted feature that is filled with set pieces, though it ultimately it reminds us of the Bard’s summation of a badly led life: “full of sound and fury, signifying nothing.”

Though a vastly interior drama, filled with odd scenes and quirky flashbacks, Bardo does have a plot. Documentary director Silverio Gama, played with gravity and elegance by Daniel Gimenez Cacho, has come back home to Mexico City, where he will accept a lifetime achievement award as a crusading journalist. He’s brought his son, Lorenzo, who angrily accuses him of being an inauthentic Mexican, his wife Lucia, still sexy and elusive, and eventually—a day later, from Boston—daughter Camila, who loves him despite feeling that Siverio is disappointing as a father and filmmaker.

Silverio tries to elude his former best friend Martin, a major Mexican broadcast journalist, but they eventually have it out—sortof—with both proclaiming their devastating opposition to each other’s work. Suffice it to say that the differences between purportedly objective journalism and point-of-view documentary filmmaking have been argued out more pointedly in other films, and essays, than what a viewer will understand from their confrontation very emotional confrontation.

Iñárritu is a master at creating grand scenes, and he’s made a wonderful one here. It’s one of the most lavish film parties you’ve ever seen—and, as is mentioned in the film, extremely unlikely to have been paid for by Mexican journalists. It’s great fun to watch Silverio negotiating the rooms, filled with beautifully dressed people—journalists? —dancing to extremely loud music, yelling amusing lines to family and friends, and enjoying the debauchery of Mexico’s cultural elite letting loose for a special night.

Where does this great scene—and I haven’t even evoked the many dream-like “fantastic” ones—fit into Silverio’s midlife crisis? Happily, he’s in love with his wife and children and isn’t a philanderer. His problems are ones many will understand: is his work valid? Has he done enough to challenge the world’s inequities? Should he have stayed to fight his battles in Mexico? Has money and fame (in Los Angeles) ruined him?

Iñárritu has set up his film cleverly. What looks to be a rather self-indulgent surrealist tale involving fish on a subway, a man who can’t speak and finds it impossible to wake up, turns into a very clever narrative involving what could truly be called a bardic state.

For those who might not know: Bardo is the Buddhist belief that people exist in a transitional state between life and death when their physical life ends. Iñárritu plays with that idea throughout the film, giving us a Western medical explanation for it to exist here.

This reviewer is immensely sympathetic to Bardo, False Chronicle of a Handful of Truths. Admittedly, it’s way too pretentious and self-indulgent to really work as a film. But I come from the world of documentaries and can tell you that no one like Siverio exists in there.

Still, examining how true events are presented in the media is surely worthwhile. And finding out whether you can go back home is an important topic. Perhaps best: Bardo feels like a work made by a filmmaker who is struggling to make something essentially important in these fraught times. No, it doesn’t work as well as a film, but Iñárritu’s Bardo is well worth seeing.