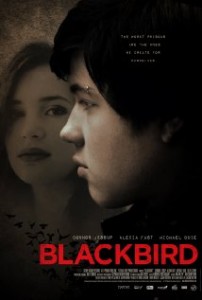 Blackbird is the most acclaimed first film to ever come out of Atlantic Canada. Last fall, Jason Buxton’s feature debut won the Best Canadian Film prize at the Vancouver Film Festival, three regional prizes at the Atlantic Film Festival for Best Feature, Director and Screenplay (from Canada’s eastern provinces) and was the co-recipient of the Best Canadian First Feature Award at TIFF. At this year’s inaugural Canadian Screen Awards, Blackbird wrapped up its glittering festival run by being recognized with the Claude Jutra Award for Best Canadian film by a first-time feature director.

Sean Randall, a teenaged urban Goth is forced to relocate to small town Nova Scotia when his mother Paula insists that he move in with his dad (and her ex-) Ricky. Sean’s initiation into a rural high school is awful: everyone seems to hate him except for “puck bunny” Deanna, who secretly admires his rebelliousness. Cory, a local hockey star and Deanna’s boyfriend, bullies Sean relentlessly when he suspects that they’re interested in each other.

Angry and frustrated, Sean writes threats (some on social media) to kill Cory and the rest of the kids in high school. He’s just playing out a Columbine fantasy in his head but when the police come to investigate, they find his diary and lots of weapons—all owned by Ricky.

Considered a threat to society and remanded to a juvenile offenders facility, Sean is subjected to far more intense bullying by Trevor, a nearly psychotic teen who has killed a “Santa Claus” who tried to rape him. After continual harassment, Sean finally agrees to plea bargain. Stating that he’s guilty (which he isn’t), Sean is allowed to return to his father’s home but he’s expelled from high school and given a list of individuals he can’t contact, which includes Deanna and Cory.

At first, Sean is careful to avoid everyone. He cuts his hair and gets rid of his Goth clothing in a sincere effort to become mature. Then one day he spots Deanna in the local mall, where she’s working part-time as a waitress. Soon, they’re seeing each other again secretly. All too soon, Deanna’s parents find out and Sean is sent back to prison for violating the terms of his parole.

Back in jail, Sean has to confront Trevor. Much stronger now, Sean is able to face his own fears and those of Trevor. As the film ends, his dad Ricky brings Deanna to see Sean in prison. Nothing in his life has been easy, Sean tells Deanna: “that’s not my way.”

Connor Jessup brings the proper adolescent gravitas to his role of Sean. He’s fine in a difficult part as is Alexia Fast, who is charming, and occasionally suggests unexplored depths as the shyly rebellious Deanna. But the real acting kudos goes to Alex Ozerov, who is terrifyingly real as Trevor, the psychologically damaged teenaged bully and sexual assault victim.

This is Jason Buxton’s film: he’s Blackbird’s director and writer. Buxton has a difficult task to perform; he’s got to make you understand that his film is complex without appearing to be pretentious. Blackbird is deliberately stark and doesn’t appear to be stylish at all. In many sequences—at the courtroom, in the school cafeteria, in hockey rinks—Blackbird looks like a low-budget doc or made-for-TV movie. That’s because Buxton has bigger fish to fry. He doesn’t want to blow you away with obscure camera angles and expressionist lighting.

Buxton wants to bare someone’s soul. Sean Randall has to move in this film from an angry uncomprehending, vulnerable Goth into someone capable of giving and receiving love. By making the film look as realistic as possible, Buxton allows audiences to easily digest and comprehend a huge emotional and philosophic change.

Sean is confronted with all manners of hell: everyone is eager to judge him. Buxton has us witness this young man, in the worst set of circumstances, growing up and finding love. Instead of hatred, he embraces a finer emotion. And that, my friends, is Art.

One of the producers of Blackbird, Marc Almon, has spoken about L’enfant, a Cannes award winning film by the Belgian Dardenne brothers, as being an inspiration for Blackbird. That’s exactly the film I thought about while watching Buxton’s astonishing first feature. Like the Dardennes, he takes us from the worst sides of humanity—in L’enfant, a young man sells his baby and then has to get the child back—to the best: a humble appreciation of love.

Blackbird isn’t nearly as good as L’enfant but then few films reach the level of that masterpiece. What’s important to realize is that Buxton is a young and talented filmmaker and Blackbird is a film worth seeing.