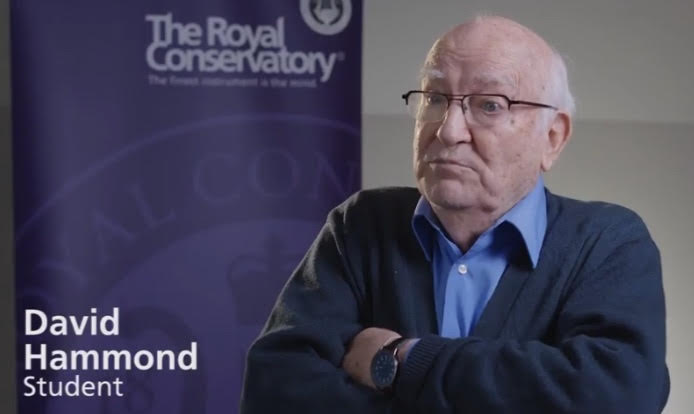 I’m always inspired when I hear about someone achieving great things – and when I say “great”, I don’t mean of the Nobel Prize level, although of course that’s awesome. I’m talking about people who achieve things that is amazing for them. It takes courage to sign up for something new, be it a photograph class or yoga, because you have to overcome a mild form of second questioning yourself. Making a dream a reality is no small thing; I’ve been working on getting a single unassisted chin-up since June 2018, and as I get closer and closer to that, I know I’ll cry at the miracle of lifting my own body weight. So whenever I read about a senior going after a dream, I am very inspired, and hope to be that kind of adventurous person when I’m older. I also am reminded of the privilege I have in teaching piano to kids. Meet David Hammond, a piano student of the Royal Conservatory of Music, who is 90 years old.

My mother begged me to play the piano at the age of 10—she was very musical. I was more interested in playing street hockey. I fiddled with the piano as I grew older after that but one of the regrets of my life was never following my mother’s advice. I’m tremendously grateful that there’s a Royal Conservatory of Music, where no matter what age you are you have an opportunity to learn.

If you had studied music before, was it easier to re-learn music? Or was it like starting over again?
I started piano study at age 65 once I retired as an offer. I did my Grade 4 and Grade 5 exam in Burlington though was ashamed of my marks (72 and 76). A few years later, I came to my retirement home and I met a teacher who was looking for a student to teach. I told her about my marks. She told me they were very good marks so I decided to pick up my studies. I took my Grade 7 and received an Honours mark.

That’s fantastic! And something to be proud of! Was re-starting music overwhelming at all?
Not really. I had the perfect opportunity to pick up the instrument in the retirement home because I don’t need to work or find work—it’s been like a dream come true.

You switched from one instrument to another. Was it a seamless transfer, or a big adjustment?
No—there’s a lot of common things about making music. My trombone playing has been an asset. You feel the music; I think it’s quite natural.

What physical hurdles did you overcome to return to music lessons?
The hurdle here (at the retirement home) is that we have a lot people living around the piano and not everyone is enamoured that we practice. We moved the piano down to the basement, but the fire chief told us the piano had to be moved because it was a fire hazard. So the only hurdle is that you don’t drive the people crazy who are around you while you practice. The administration has been 100% cooperative; without them, I wouldn’t be able to do it. A lot of people are proud of what I’m doing.

Wow – I guess you’ve gone back to “dealing with the roommates”, in a matter of speaking. I’m glad people are proud of you! What emotional/mental hurdles did you overcome to return to music lessons? (Especially if you once had a nasty teacher or something)
Your question reminds me of a quote from a missionary: “do not speak to me of sacrifice, speak to me only to me of privilege.” To make music, if you like it, is nothing but a privilege. That’s how I feel.

I appreciate the reminder – one I’ve given to a few of my students – thank you for that. If you studied as a child, did you resist practising? How do you feel about practising now?
The first six years of practicing was a disaster—I don’t remember anyone telling you that music was supposed to be a joy. There was always someone yelling at you about pushing the wrong valve or something like that. But I remember there first night I played the trombone up in a cabin near Vancouver. I heard the sound of Tommy Dorsey—his music captured me from the beginning.

What difference do you notice between studying music when you were a child, vs. studying music now?
I think everything rises or falls depending on the kind of teacher you have. I didn’t have good brass teachers until I became a Salvation Army officer. I’ve always wanted to play to my potential.

What advice would you give anyone of any age who wants to study music but has doubts?
The first thing you have to find out is if there you have any “natural music” or the love for music. The worst thing you can do is drive someone to play. You also have to be influenced by good teachers.

The older I get, the more I love playing. I think music has kept me young. I’m in my 90th year and I don’t feel it at all. Music brings the best out of you and it brings you joy. There’s nothing better you can do than learn music.

My heartfelt thanks to David Hammond for doing this interview. He’s made me think, as a piano teacher, about more emphasis on the joy of music-making, which can be tricky to highlight with squirmy six-year olds who don’t want to practise. Also, BIG thanks to RCM publicist Jeff Embleton, who politely persevered in getting answers from Mr. Hammond, and transcribed them over the phone. Publicists are the unseen heartbeat behind the media! Thank you, Jeff.