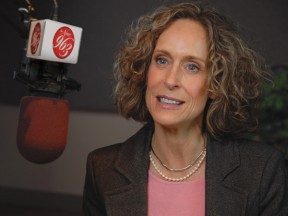 Alexa Petrenko was born in Germany where her mother frequently sang her to sleep with the Brahms’ Lullaby which may explain her life-long love of classical music.

When she was still very little, the family moved to Don Mills, where there was almost nothing to do, which may explain her life-long love of travel.

She learned English in Kindergarten, which may explain her life-long love of languages, and took the usual piano and ballet lessons as a child. But singing was always her real love, and for years she would sing anywhere, anytime and for anybody at the slightest provocation.

Alexa studied languages and literature at U of T (“study something sensible,” her parents said, “not music”) and wrote a lot of essays comparing plays with opera librettos. In the middle of her PhD in German Literature she finally had enough and ran away to join the Elmer Iseler Singers, with whom she performed, toured and recorded in the mid 1980’s. She has also sung with the Toronto Mendelssohn Choir and Tafelmusik Chamber Choir.

Currently, Alexa only sings at home for the dogs and the birds, but you can hear her speaking into the mic on Breakfast Classics and Sunday Night at the Opera on The New Classical FM. She occasionally uses her writing voice as a journalist, and she is sought after in the arts community as an emcee for concerts, galas and fundraisers.