Hamilton is a triumph! A review by Marc Glassman

Let’s get the suspense over right away. Hamilton, the genre-busting hip-hop musical about one of America’s Founding Fathers, is a triumph. Thomas Kail’s film documents the original cast (with one minor exception) performing at the Richard Rodgers Theater in 2016, a year after its stunning arrival on Broadway. It offers us a trip back to Obama’s presidency, when it seemed possible to re-imagine history to star members of diverse communities—Blacks, Latinos, Chinese—as key figures in the American Revolution. Those times seem far longer than five years ago, but one of the pleasures of watching Hamilton is basking in a time before Trump, when evoking American history was an exciting and worthwhile thing to do.

The release of Hamilton on this July 4th weekend is a special treat envisioned as a spectacular awareness builder for the streaming channel Disney Plus. With Pixar, Marvel, Star Wars, classic Disneys and National Geographic, the channel is already a must-see treat for viewers across the States and Canada. Adding Hamilton to the service over a year before it was intended for a film release in October 2021 was something that a company with Disney’s prowess could do. 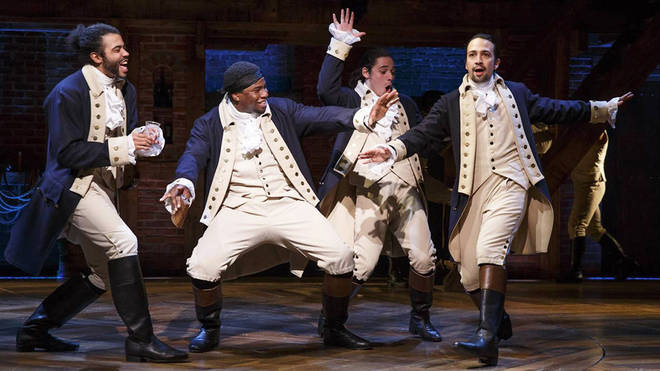 As for Hamilton itself, the play won just about every award possible in American theater. Off-Broadway, where it first premiered, it garnered over 25 prizes in a dizzying number of categories. On Broadway, it won 11 Tony awards for, notably, best musical, original score, direction, featured actor and actress, orchestration, and choreography. Hamilton won the Grammy and Billboard awards for best soundtrack album.

And did I mention that Hamilton won the Pulitzer Prize for best drama? Of course it did. Like the vast majority of musicals and even dramas, not all of Hamilton is absolutely accurate. Alexander Hamilton’s in-laws owned slaves and he didn’t support Indigenous people. As a leader of the Federalist Party, his policies were more conservative than Thomas Jefferson’s Democratic Republicans. But it was Hamilton’s personal story that seems to have attracted the brilliant actor-singer-composer-dramatist Lin-Manuel Miranda. 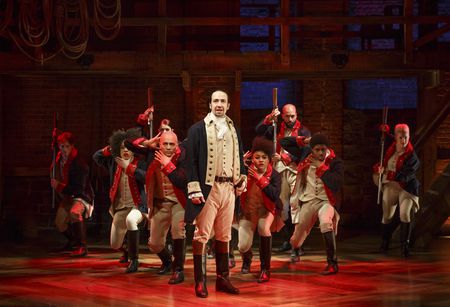 Hamilton was born “out of wedlock,” as polite society used to call it, on Nevis in the Caribbean islands. His mother died before he reached adolescence and if a merchant hadn’t taken care of the bright young boy, no one would have ever heard of him. Luckily, he arrived in the British North American colonies at a time when revolution was in the air. While studying law and writing on the intense political issues of the day, Hamilton was virtually adopted by George Washington, who made him his aide-de-camp and allowed him to take a key, victorious position in the final battle of the Revolutionary War at Yorktown, Virginia. Hamilton’s triumph as part of Lafayette’s campaign established him as a key figure among the Founding Fathers, most of whom came from wealthy backgrounds.

All of this is recounted in the first half of Hamilton. It’s a tour-de-force, with truly melodic songs rendered in a brash propulsive hip-hop style. Hamilton’s anger and revolutionary zeal are given full scope  as is his ambivalent friendship with Aaron Burr, great admiration of Washington and romance with Eliza Schuyler. The first act of Hamilton is staged and choreographed with pace and fluidity,  replicating the chaotic time of the American revolution. The cast couldn’t be better, particularly Daveed Diggs as the effervescent Marquis de Lafayette, Jonathan Groff as an over-the-top King George the 3rd and the stunning Phillipa Soo as Hamilton’s wife Eliza.

Act Two is inevitably less stunning. There’s more to cover: Hamilton’s controversial role as the first Secretary of Finance; his fights with a fellow member of Washington’s cabinet, Thomas Jefferson; the scandalous affair that Hamilton conducted with Maria Reynolds: the death of Hamilton’s eldest son and the fatal duel with Aaron Burr. Even a dramatist as skillful as Miranda has to do a lot of heavy lifting to make these quite disparate scenes work. The second act is nonetheless brightened by Daveed Diggs’ haughty interpretation of Jefferson (totally different than his Lafayette), Leslie Odom, Jr.’s introspective interpretation of Aaron Burr and the sensitive understanding that Philippa Soo brings to a deeply troubled Eliza.

Hamilton is a one-of-a-kind musical. Thomas Kail brilliantly documented his own theatrical direction in the film. He’s made it quite vigorous and entrancing without ever allowing you to not understand that you’re actually watching a great version of the original musical. As for Lin-Manuel Miranda, what can anyone say? He deserves all the kudos he’s received for creating this superb piece of theatre.