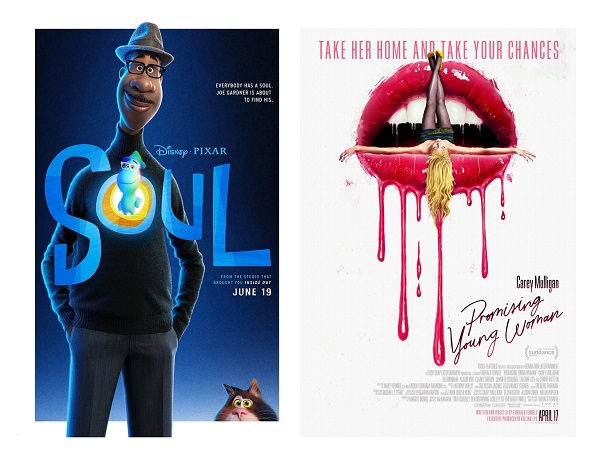 One of 2020’s most anticipated blockbusters, Soul, never hit the big screen and has been transformed into the first major streaming release of 2021 on Disney+. Not every Disney film becomes a critical hit but this one certainly has done: it’s a funny, character driven animated feature, with quite a lot of philosophy lurking at its margins. When a Disney film succeeds, it works for audiences of all ages, and Pete Docter’s Pixar release does have that universal appeal.

Soul’s from the heart story starts us off with Joe Gardner (Jamie Foxx), who is confronting a huge issue: should he build on a nice, normal job as a music teacher or follow his dream to be a major jazz pianist? Distracted by his dilemma, Joe falls down an open manhole cover and lands, knocked out, at the bottom of a subway system. Will he live or die? While Joe’s body lies undiscovered, his soul enters a staircase heading towards the Great Beyond. (And the animation shifts from a Pixar lifelike realistic depiction to a more cartoony figuration). Fighting for his life, Joe’s soul ends up in the Great Before, a place where souls are sent down to become infants on earth. Mistaken as one of the mentors to these souls, Joe ends up with a rough case, 22 (voiced with a fine temperament by Tina Fey), who has been fighting re-entry into humanity for a very long time. Returning to earth for a trial amount of time, the mismatched duo become even more incongruous when 22 turns into Joe while the pianist/teacher becomes his slightly snarly cat. While both try to make Joe decide about his life decision as the clock is ticking, the deeper implications of a soul’s journey on earth and beyond are also being played out.

Despite its slightly complex scenario, Soul is easy to watch and enjoy. Is it a comedy? It’s certainly funny enough to qualify even though there are some metaphysical issues urging to be addressed in the film. Let’s call it a Peter Docter film and be done with it. The auteur of the Oscar winning features Inside Out and Up has done some of his best work yet in Soul. Filled with delightful animation, great voice actors including Phylicia Rashad,  Angel Bassett, and Graham Norton and an effective narrative, Soul might win an Oscar. As Ringo once sang, “You can never tell.”

A witty and tragic black comedy, Promising Young Woman may be the finest #MeToo film to date. It’s sad to merely call it problematic rather than praising it to the rooftops. I write this as a man, which is problematic itself, though I imagine that the makers of this film—director/scriptwriter Emerald Fennell, Carey Mulligan, co-producer Margot Robbie and others—want to have it seen by the widest audience possible.

I think the problem with the film is in its conception of Carey Mulligan’s Cassie: is she a construct for a gender based revenge tale or a character, whom you should believe in and root to win? The talented Fennell, most known till now for being the showrunner of Killing Eve, has clearly worked with Mulligan to make Cassie a bit of both. I’m not sure they’ve succeeded in the way that the first season of Killing Eve absolutely did. The thing is, Killing Eve is a genre show, allowing the public to relate to essentially one-dimensional characters. Promising Young Woman is intended as a drama, and with such a fine actor as Mulligan in the lead, the film could have gone in an empathic direction. It didn’t because the central idea is to make Cassie an epitome of anger and revenge, and in that, they succeeded. But did that success reduce the depth of Cassie as a person?

The opening premise in the film is simplicity itself. Cassie, an attractive woman dressed somewhat provocatively, is seen by men at a club. She’s clearly drunk. When approached by one of the men, she is seemingly smashed out of her head. The man talks her into being driven home by him—but “home” turns out to be his apartment, where another round of drinks are offered. We don’t figure out what happens next but we’re soon offered another performance where Cassie, supposedly blind drunk, turns the tables on another Sir Galahad, when she starts speaking lucidly after he starts a physical assault on her, asking him what he’s doing. It turns out that Cassie has been playing a dangerous game, humiliating men by appearing helpless when she’s clearly not. What would happen if a man turns his physical strength against her?

Cassie is a puzzle to others—her parents, old friends and even the owner of the coffee shop who employs her. She was a brilliant medical student until she dropped out after something terrible happened to her best friend, Nina. One of Cassie’s old med-school chums, Ryan, wants to take her out but she doesn’t give him much of a chance. In another devasting scene, she plays out the scenario of a woman being deceived by a man and finding no support from women, with her former Dean, who didn’t back Nina.

Though she does finally accept Ryan into her life, it seems clear that we shouldn’t invest in their chances of becoming a happy couple. This is a film, where nice guys don’t really exist and all roads lead to the hell of Nina’s terrible encounter with another moral loser named Al Monroe. Promising Young Woman works so well in many ways including a beautifully planned finale, that one wants it to be perfect, as Killing Eve was for a while. Fennell’s film has shaken some people up and it’s easy to predict a bright future for her. I hope that an audience does support this massively intelligent film.