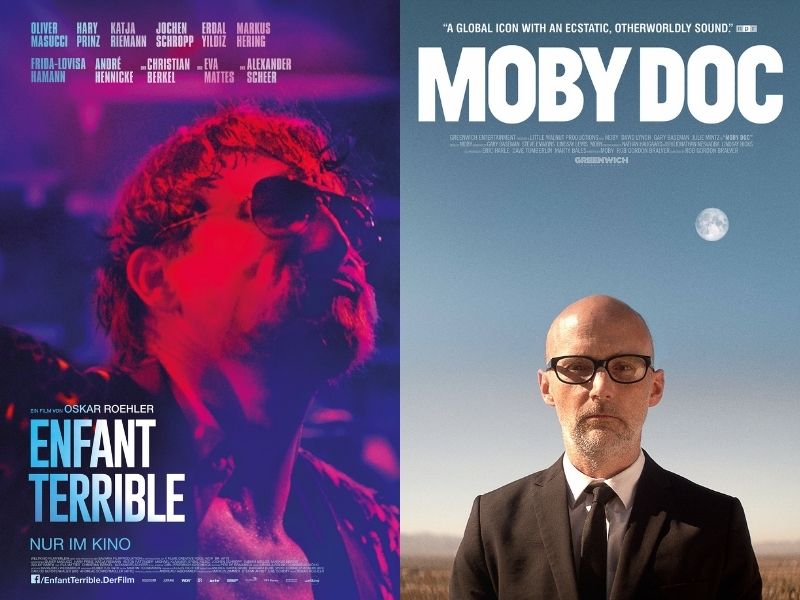 Many artists have lived short, crazy existences filled with love, violence and remorse but few can compare to the compelling life and career of Rainer Werner Fassbinder. The fierce and brilliant director-writer-actor burned his path through Germany from the last Sixties to the early Eighties, creating over 40 films, theatre productions and TV series. He won multiple film awards at festivals from Cannes to Chicago to Berlin, broke through barriers by starring gays, Blacks and Muslims, scored a huge international success with The Marriage of Maria Braun, and decades before The Sopranos, made the first ground-breaking TV series, Berlin Alexanderplatz. A blistering controversial figure, Fassbinder was aggressively gay (though occasionally bi-sexual), a cocaine addict and more than capable of physical abuse. It was hardly a surprise when he died at the age of 37 in 1982—few figures have burned the candle at both ends in a way that matched Fassbinder.

Oskar Roehler’s Enfant Terrible tells Fassbinder’s life story in a surprising manner. He assumes that the audience will know the details of director’s massive successes and concentrates on his life and love affairs. Happily, the casting of Oliver Masucci as Fassbinder is perfect: he not only looks the part but is charismatic in a way that makes his self-centred manipulative approach towards his actors and lovers understandable and compelling. The film is often set up in the style of Fassbinder’s early work, with his deliberately artificial style. Many of the scenes, particularly those set indoors, feel completely theatrical. That sense of overblown melodramatic lives being played out by the director and his friends is enforced by the anti-realistic set design.

The film concentrates on the three key gay relationships in Fassbinder’s life, with Gunther Kaufmann, El Hedi ben Salem and Armin Meier. Kaufmann, the son of an African-American U.S. Army serviceman, was mainly heterosexual but had a hot affair with Fassbinder. Clearly, he was hoping to become a star but his poor acting ability led to him failing when the director cast him as the lead in Whity. Fassbinder’s anger towards Kaufmann led him to explosions of sadism, which makes psychological sense, although it is difficult to watch. The reverse happens with Moroccan El Hedi ben Salem, who had talent but attempted to control the director privately. Although he starred in the Fassbinder hit The Merchant of Four Seasons, ben Salem is eventually abandoned—and dies by suicide, off screen. Finally, Armin Meier, who was a butcher—lower class compared to Fassbinder’s bourgeois artistic upbringing—is the “other” that always fascinated the director but was, in this case, German. Meier was absolutely besotted with the director. It was Fassbinder who eventually discarded Meier, who also committed suicide and was the inspiration for arguably the director’s finest film In the Year of 13 Moons.

One of the problems in appreciating Fassbinder’s life story in Enfant Terrible is that we never see clips of his films. The audience has to accept the fact that this abusive, drug-taking, sexually compulsive figure was simultaneously a great artist. It’s a step that is easy for me to do: I was a huge supporter of Fassbinder’s when he was at the peak of his game in the late Seventies and early Eighties. Audiences who come to Enfant Terrible with an appreciation of the director’s work will find this film compelling. If they don’t, they may be forgiven for wondering why so much attention is being paid to a not very nice man.

Moby is the perfect subject for a documentary. Everyone knows who he is and yet, he has remained a mysterious figure. His face isn’t well known and his love life isn’t a matter for gossip. While he’s had huge hits, Moby isn’t associated with a group of influential musicians although people might know that he has roots in punk rock. He is famous as a producer and was a key figure in the dancehall scene of the Nineties but that doesn’t confer superstar status in a world ruled by photogenic celebrities like Taylor Swift and Miley Cyrus.

But that doesn’t mean an audience isn’t interested in knowing more about him. He’s created influential and arguably, great music and seems to be the kind of guy who has lots to say. After all, not many people would have their name referenced through Herman Melville’s great novel. Which means that Moby Doc is a film that is waiting to be embraced by a public—if it’s worthy of close examination.

Clearly, director Rob Gordon Bralver approached Moby Doc with an experimental artistic attitude in mind. Dubbed a “surrealist documentary,” Bralver and Moby’s film has deliberately added wild, disparate elements to a piece, which  might have been more straight forward. Since Moby’s music tends to be long, atmospheric and danceable, stunning visuals accompany much of the work that made the musician so highly regarded 25 years ago. Bralver employs an animator, Steve Emmons, to add to the illustrative palette of the doc. And Moby is clearly encouraged to digress as he tells his life story to the camera.

Having noted all of that, it’s fair to say that Moby Doc isn’t all that surrealist in its approach to Moby and his work. Even the occasional presence of David Lynch, a Moby admirer and friend, doesn’t really add much edginess to the film. What’s here is the tale of a talented musician, who probably is related to Melville (it is his middle name), and achieved a far greater success than he imagined. We find out about his rotten childhood—his father died young, his mother was ill-equipped to raise him and was usually broke—which only got better when he discovered music. A guitarist and songwriter, he moved to New York when he was 24 and experienced  a fairly rapid road to success as a DJ, producer and remixer. His single “Go” mixed with “Laura’s Theme” from Lynch’s Twin Peaks propelled him to European hit status in 1991, allowing him to flourish until he made a terrible career move five years later with his very personal punk-oriented album Animal Rights. Unfortunately, the public wasn’t interested in veganism and animal activism then, which cost Moby money as he bought himself out of an expensive record contract.

Luckily, Play, his next album, became a huge hit worldwide in 2000, leaving the 35-year-old Moby in excellent financial and artistic shape. Since that time, Moby has been able to make the music he wants while living in New York and Los Angeles. For years, he was close to David Bowie, which still means a lot to him. In the film, Moby is frank about his problems with alcoholism and admits to having pursued the wayward existence of an excessive rock star for several years. It’s clear that he had to fight personal demons, likely based on his difficult childhood,  and there are moments where one feels not only Moby’s pain but also his self-pity, which hopefully, he has now conquered.

What we see in Moby Doc is a musician, who has faced battles but is now  on an even keel. He’s still making fine work and remains an animal rights activist. While Bralver’s documentary is not a revelation, it’s one that is fine to watch. One thing is sure: we now know what Moby looks like.