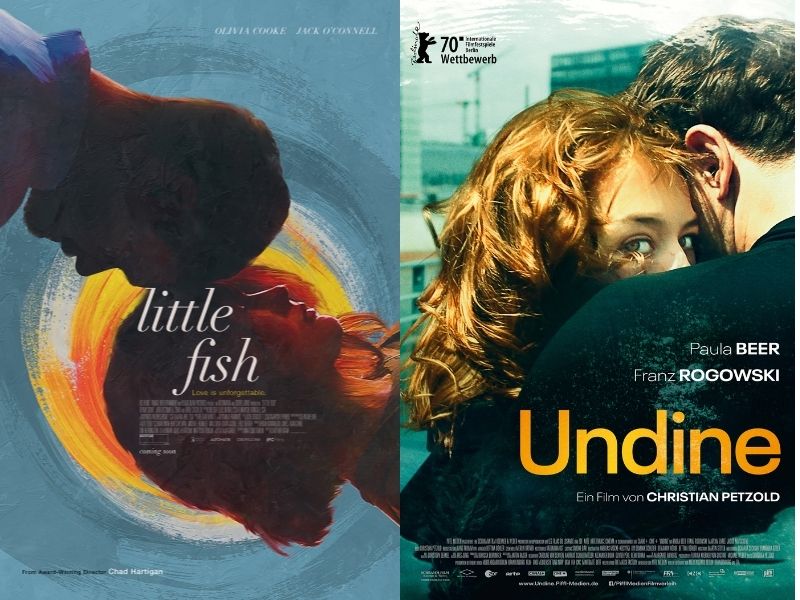 Mattson Tomlin, script based on a story by Aja Gabel

The classic German word “zeitgeist,” which means “spirit of the time,” came to me recently while watching the smart romantic sci-fi film Little Fish. Here’s a work that has something to say to us while the pandemic is still dominating our thoughts and actions. There have definitely been better eras in our past—anyone for the hippie days of peace, love and understanding?—and it’s clear that the spirit of our time is one of anxiety mixed with concern for others, especially loved ones.

While there are some extraordinary films about COVID–Torontonian Yung Chang’s Wuhan Wuhan, Ai Wei Wei’s CoroNation and the Wuhan verité feature 76 Days, to name three–what we see in Little Fish is quite surprising. Here’s a film that wasn’t made to address the pandemic but it does so anyway. Little Fish is based on a short story by Aja Gabel, written 10 years ago, about a young couple being in love while an epidemic rages. Optioned by screenplay writer Mattson Tomlin, it came together as a project with director Chad Hartigan before COVID-19 happened. The film was shot two years ago and would have premiered at Tribeca last year except that the pandemic intervened.

Now Little Fish is out for audiences to appreciate not only for its own storytelling qualities but as a prescient look at what happens to people when a pandemic suddenly appears. The story is of two appealing young lovers, who find their romance playing out during an increasingly hazardous time. Emma, a British veterinarian now living in California, meets photographer Jude cute by the Pacific Ocean; he loves her accent and they bond over the dog they adopt, Blue. The rapport between Olivia Cooke as Emma and Jack O’Connell as Jude is excellent, making their quick decision to marry seem inevitable. But there’s a problem–NIA, a neuroinflammatory affliction, causing a slow deterioration of memories, has appeared.

Little Fish offers an eerily similar response to NIA that we’ve experienced with COVID. A lot of denial goes on in the film as in life, particularly when the reported cases seem distant and isolated. All too soon, it enters the lives of Emma and Jude when Ben, a musician and part of a couple who are their closest friends, quickly sinks into complete memory loss. Those of us who have experienced the effects of Alzheimer’s on family and friends know how terrifying that can be—it’s a condition that isn’t science fiction. But turning it into a pandemic is, and the stories in Little Fish quickly become devastating.

People cease to function: bus drivers stop their vehicles and leave; fisherman can’t row their boats to shore; runners keep on running until they collapse. When the possibility of a cure is explored and a test proves positive, the film shows frustrated crowds rioting, demanding the government and medical establishment to save them. Through TV clips, Jude and Emma remain all too aware of the public’s panicky response to NIA. In a particularly dark scene, the couple are stopped by highway patrol in their car; the police want their I.D.’s because they need to have as much information as possible on everyone as the situation gets worse.

Inevitably, one of the couple begins to succumb to NIA. In the event, it’s Jude, leaving Emma to dig in and try to keep his memories and their marriage alive. Little Fish comes alive as the actors, particularly Cooke, show depth of feeling in compelling scenes about their fragile relationship. The film time shifts elegantly between the duo’s courtship and early married life and the inevitable effects of NIA on their lives. While playing up the effects of the NIA pandemic on the world, Little Fish’s creators have made sure that an audience will care about the young lovers and their fight to keep their romantic lives going.

Bigger audiences should and will come to see Little Fish due to its fortuitous relationship to our current situation. That’s good news for a fine little film that just happens to fit into our zeitgeist.

Christian Petzold is a rarity these days, a classic auteur who creates narratives that are intoxicatingly ambiguous, seducing audiences into the embrace of deliberately complex structures and characters. And yet, a film like his new one, Undine, can seem simple on the surface. Undine Wibeau, the titular character played with imperious restraint by award-winning actor Paula Beer, is an architectural historian who is furious when her boyfriend Johannes breaks with her until she meets Christoph, a diver, who falls madly in love instantly. A series of events turns the situation melodramatic and even tragic, although most of it seems explicable. But there won’t be a viewer of Undine that won’t see that far more mysterious forces lie beneath the waters of this tale of earth, aqua and love.

Take the name Undine, for instance. It is a word coined in the Middle Ages meaning “water sprite” or, in the Hans Christian Andersen interpretation, “mermaid.” While Ms. Wibeau is an expert on Berlin’s many transformation as a city—there are a couple of set pieces where she makes what could be boring lectures into fascinating talks—she also exhibits odd sides to her personality. When Johannes tells her that he wants to leave her, for instance, she matter-of-factly states that she’ll kill him if he does so—and he takes her seriously. In myth, water sprites are prone to violence if their land-lovers betray them. Undine’s quick, and almost unintentional, seduction of Christoph is quirky, too with a plastic toy of a deep sea diver breaking through a fish tank to immerse them in blood (caused by shattering glass) and water. Undine has replaced her lover with someone more appropriate, who inhabits both land and sea.

Petzold reunites actors Paula Beer and Franz Rogowski from their previous hit Transit and it works exceedingly well. The two have a great rapport, making the sensual nature of their relationship instantly exciting and natural. This makes the more tragic element of the story harder to take as you will enjoy what they have together. It was wonderful to see how enamoured Rogowski’s Christoph is with Undine: he loves hearing her talk and realizes that she’s far smarter than him. For Undine, the romance seems much better than the one she had with Johannes as she can relax in the embrace of total acceptance—apparently what a water sprite wants.

As events turn more violent in the last third of the film, Petzold allows the supernatural undertones to become more explicit. While one never knows completely who Undine is, there’s no doubt that odd forces are behind some elements in the film’s plot. What’s wonderful is that the unexplainable works so well in this film, which is about the mysteries of love even in an environment—modern-day Berlin—that seems to deny ancient romance. But the original word for the city was “marshy place” and perhaps this Undine-like combination of Land and Water will bring Berlin back to its roots sometime in the future.

A terrific film, Undine is a treat for lovers of art-house cinema.