Film Review: Akilla’s Escape and Running Against the Wind 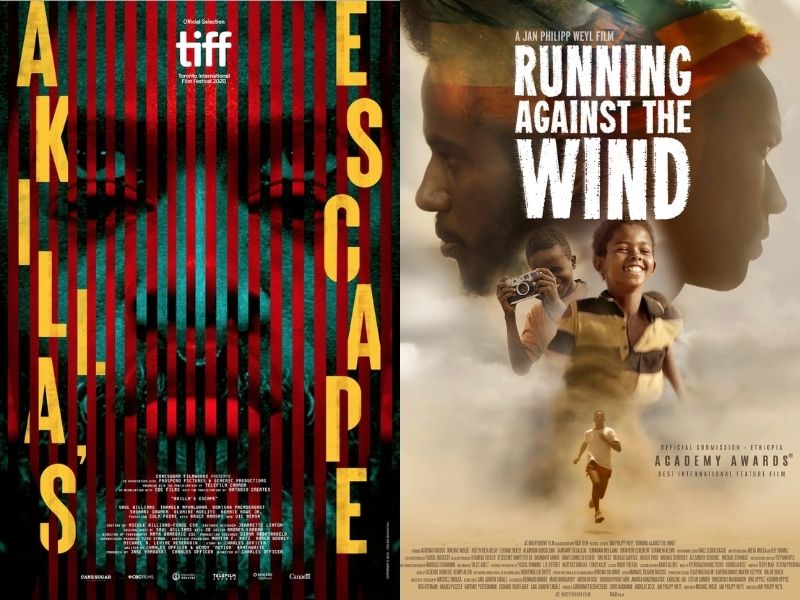 Do the sins of the father really visit the son? Charles Officer’s complex drug-laden thriller asks many questions and that’s certainly one of them. Akilla, a 40-something dealer of sometimes illegal substances, is nearly killed for his once-nefarious efforts and you know somebody’s gonna have to pay. The problem, after he works out how not to get killed himself, is that Akilla’s partners decide that he should eliminate a voiceless kid, who worked for the real crooks. Akilla doesn’t want to be “a killa” that way; he wants to get the leaders, not the child. His tough playmates warn him that saving the kid may prove to be his “Achilles’ heel,” but Akilla wants to avoid tragedy—after all, this is his movie, and he’s supposed to escape.

Officer’s very clever film time shifts between contemporary Toronto and 1990s Brooklyn, where the same kid shows up—only this time he can talk and he’s, in fact, the young Akilla. (Yes, a coincidence—a mind boggling one essential to the plot). Back then, he was working with the Garrison gang and had a problematic relationship with his own daddy. Then, drugs were certainly illegal but black revolutionary thought was treated as if it was unlawful, too. Both could lead to death back in the ‘90s and things haven’t changed for the better since then. If the Brooklyn section of Akilla’s Escape works better than the contemporary one in Toronto, it may be because the past locale feel exotic and the evolution of Akilla from boy to man is more interesting than what he is doing now.

There’s much to like in Akilla’s Escape, most particularly the look of the film. Cinematographer Maya Bankovic (The Prison in Twelve Landscapes, Below Her Mouth) has a great eye and Officer’s films (Invisible Essence: The Little Prince, Nurse.Fighter.Boy) are well known for their poetic sensibility. Rarely has Toronto looked as mysterious and inviting as in this film. The lead performance by actor/musician Saul Williams is intelligent: you see him playing at being confident while underneath, his insecurities are bubbling up. Also very good—and key to the film’s enjoyment—is the compelling work of Thamela Mpumlwana, who plays the voiceless Sheppard and the young Akilla, two quite different boys, both necessary to the narrative.

Does Akilla’s Escape work as a film noir take on Toronto? Not completely. Visually impressive, it doesn’t connect the two stories of Akilla’s life strongly enough nor does it deal incisively with the racist establishments of 1990’s New York or today’s Toronto. Akilla’s Escape is certainly worth viewing but lacks the emotional strength necessary to make it a totally successful film.

Running Against the Wind

Ethiopia’s selection for the best foreign language Oscar, Running Against the Wind is in many ways, a classic, though stereotypical, tale of life in a country that hasn’t completely shrugged off its colonial past. Though we’re never told why, the main story of two village lads trying to make it in Addis Ababa is shown to be filled with terrifying obstacles. Success can be achieved but if you fall off the elevator ride to stardom, you can end up in the gutter or worse.

The film starts with two likeable lads  growing up together, living a simple existence until one of them, Solomon, is left orphaned. Abdi and his father unofficially adopt him as he reaches his teen years, marking them more like brothers than friends. When a white man from Addis Ababa visits the village, he photographs the people, winning many friends including the youngsters. But Solomon does something radical: he steals one of the cameras and heads off to Addis Ababa on foot. There, instead of becoming merely one of the city’s aimless youths, he continues to photograph and falls in love with a lovely but impoverished girl, Genet. But a street gang also starts to draw Solomon in.

Just as Solomon is at a crisis point, almost losing his dreams, Abdi shows up—as a fine young runner, trying to qualify for the Olympics. Abdi has to kowtow to a very tough but supportive coach, who makes it clear that the world is divided into two categories: winners and losers. Abdi brings this stern but loving message to Solomon. Kicked back into gear,  Solomon starts shooting terrific photos of the would-be Olympic runners—and things look rosy for the two. But then the violence of the street comes back, dragging them into a struggle for their lives and future happiness.

Director Jan Philipp Weyl has constructed a film that is well meaning and filled with Western good intentions. He has said that Slumdog Millionaire inspired him to make a film about street people and there’s no doubt that his take on Ethiopia is informed by his knowledge of India, where the German filmmaker has spent time. Weyl has also noted that Ethiopians he knows love Bollywood films, which may be why Running Against the Wind does offer a conventional tale, where good and evil can be easily defined. But it’s worth noting that the scenes where Solomon talks about photography and shares images with a fellow camera artist played by Weyl are some of the best in the film. Conventional it may be but Weyl has made a film that is heartfelt and will hopefully find an audience in North America and Africa.