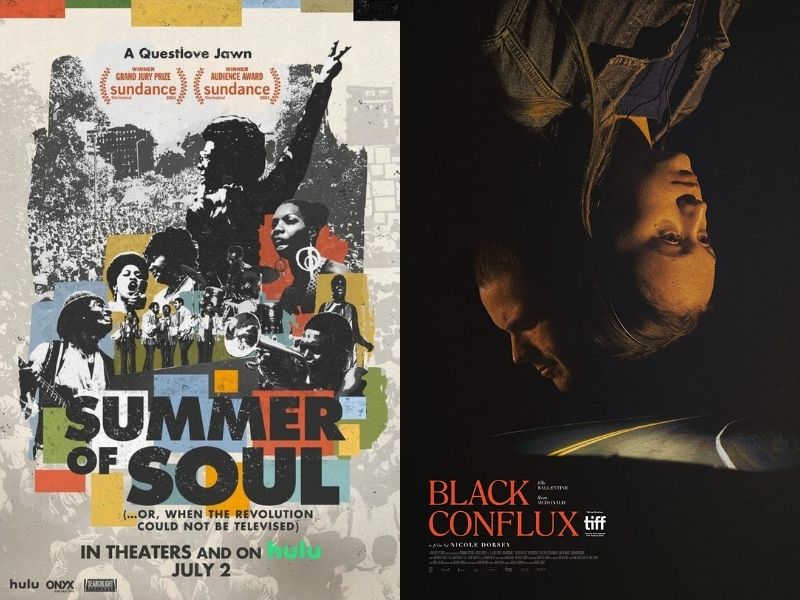 Thoughtful films for an important weekend

Summer of Soul (…Or, When the Revolution Could Not Be Televised)

While celebrity director Ahmir “Questlove” Thompson and his producers have made much about their doc Summer of Soul (…Or, When the Revolution Could Not Be Televised) finally being made more than 50 years after the 1969 Harlem Cultural Festival took place, it is a great time for the film to be released. Hip hop, rap, house, electronica, drum & bass (and many others) have long since replaced gospel, jazz and r&b and blues as popular music genres but the Black Power politics of 1969 is suddenly immensely relevant in this age of George Floyd, BLM and grass roots activism. And the performers who performed at what is now Marcus Garvey Park are now legendary: B.B. King, Stevie Wonder, Gladys Knight & the Pips, Abbey Lincoln, Nina Simone, Mavis Staples with “Pop” and her sisters.

Summer of Soul is that rarity, a documentary that might just be the most anticipated film of the year. Questlove’s film premiered to astonishing press notices at this year’s Sundance festival– one of the first to actually have a crowd attend–and went on to win the Grand Jury prize and the Audience Award at Park City. Now a film about a series of outdoor concerts in Harlem that attracted over 300,000 people in 1969 will become a hugely popular event in the rapidly changing pandemic world of today. Audiences will come expecting to hear wonderful music and they will certainly be rewarded by the brilliant blues playing of B.B. King, the inflammatory jazz of Abbey Lincoln with Max Roach and the skilled moves and vocalizing of Gladys Knight & the Pips. With Questlove as the film’s director, insightful looks into the music of the Sixties were bound to have pride of place in Summer of Soul. A famous drummer in his own right, Questlove has placed an intense drum solo by Stevie Wonder into a key moment in the film and included a personal anecdote by Mavis Staples in which gospel great Mahalia Jackson quietly anointed her on stage—woman to woman–as the new Diva of Gospel.

Still, it isn’t just the music that makes Summer of Soul absolutely remarkable. The film is more than that: it captures the spirit of the Sixties politically and emotionally. 1969 marked the end of a decade that saw the assassinations of Malcolm X, the Kennedys and Martin Luther King. The Vietnam War was raging, with a high percentage of African American men fighting in an imperialist war for a government that had only recently given them their full civil rights. Riots had erupted in many American streets in 1968 after Martin Luther King’s murder and it’s likely that the Harlem Cultural Festival only got its funding in an attempt to pacify the most renowned Black community in America a year later.

Summer of Soul features Jesse Jackson, King’s heir apparent, speaking several times about the simmering hot political situation in Black America. The controversial Black Panthers had a real presence in the Park that summer as did the police. Nina Simone and Abbey Lincoln were radicals, whose politics were well known to the crowd and voiced in the festival and the film. Although the festival did succeed to keeping Harlem under wraps, the concerts definitely expressed the anger and frustration of Black Americans as well as pride in their culture, which produced so many great musical stars at the time. One of the nicest aspects of the doc is contemporary interviews with attendees of the festival—many quite young back then—who remember how brilliant and fraught the events were in 1969.

Summer of Soul is being compared to Woodstock, which certainly helped the growth of hippiedom in the early Seventies. What would Summer of Soul have done to Black Power then? We’ll never know. But it’s great the film is out now, ready to influence a generation that is as political and culturally aware as were their grandparents. This is a film that everyone should see. 2021 needs to be a new Summer of Soul.

A drama set in Newfoundland in 1987, Black Conflux is the first feature by Nicole Dorsey, who has managed to simultaneously evoke the bleak existential tales of two people in a small town: a smart but uncertain teenaged woman and a desperately unhappy male blue collar worker. While we wait for the two of them to meet, the film concentrates on their very different lives.

Jackie, the teenager, played with tact and quiet humour by Ella Ballentine, is dealing with her changing life, in which she’s being supposedly mentored by her party animal aunt while her mother serves time in prison. She’s a smart student with enough singing talent to make the school choir but Jackie also wants to indulge in her fun, social side—seeing boys and hanging out with best friend Amber. Dennis, the traumatized worker, is interpreted by a charismatic Ryan McDonald in the wounded male tradition of James Dean: macho, intense, with nothing to say to anyone, particularly women, who haunt his thoughts and inhibit his actions.

Jackie’s story is the more pleasurable one to follow and it’s reasonable to assume that it’s one that came easier for Dorsey to create. We see a high school season through Jackie’s inquisitive but clear eyes: the boys who interest her, especially a seemingly cool one named Donovan; her girlfriends, particularly Amber, who like boys and are curious about sex; and the teachers, who embarrass her because they see her potential. Her life is made up of parties, with people saying little to each other and tentatively pairing off to get physical, and scenes in malls, where the girls indulge in petty larceny and see movies. At home, Jackie has to take care of her drunk Aunt or spend time in her room, doing homework, being bored.

Dennis’s tale is more harrowing because he hasn’t paired off with one of the small-town girls, who could have been Jackie or Amber’s older sisters. He works at a dead-end factory job and mostly daydreams in an elaborate style about the girls he’d like to have sex with, while, of course, never even speaking to them. Dorsey isn’t particularly good at getting his blue-collar life down—but how many men are good at dramatizing the lives of women? It’s clear that Dennis is becoming unstuck in bad ways—his anti-social behaviour towards family and friends is getting worse and his fantasies are becoming more violent.

Nicole Dorsey has made a very interesting debut film, but she eventually leads herself into a conundrum. What will happen to Jackie if and when she meets Dennis? The film is structured in such a way that the meeting has to happen but to what purpose? We certainly don’t want a tragic conclusion but an uplifting one seems impossible to imagine. Suffice it to say that Dorsey gives us ideas to ponder while avoiding the obvious solutions to her script. Black Conflux is a film with promise that showcases the talents of two hopeful up-and-comers, Nicole Dorsey and Ella Ballentine.