Film Review: Roadrunner and Can You Bring It 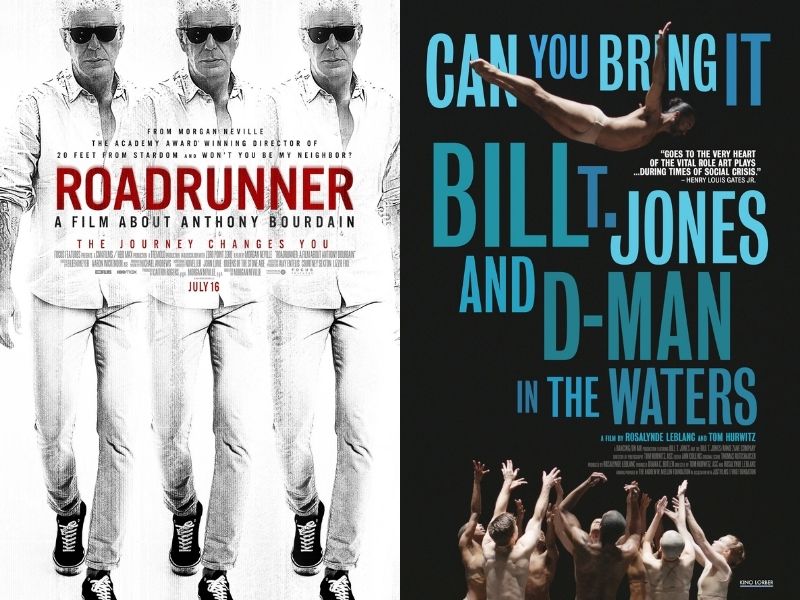 Roadrunner: A film about Anthony Bourdain

Why did he do it? Anthony Bourdain, the celebrity chef, brilliant memoirist and charismatic TV essayist took his own life on June 8, 2018. Tall, thin, sardonically funny, downbeat handsome in a way that women love and men appreciate, Bourdain seemed to have it all. Over a period of 20 years, he’d come a long way from being a highly regarded chef at the chic Manhattan steak house Les Halles to the bestselling writer of “Kitchen Confidential” to a high-ranking personality on CNN. What was brilliant throughout his life was the man’s style: tough, passionate, analytical with a nose always for the story. Not only had he excelled in any style or genre he pursued, Bourdain found a way to make them his own—and found a public eager to endorse him in every endeavour. And yet, he chose to end it all.

Morgan Neville, the Oscar-winning director of 20 Feet from Stardom, whose back-up singers to superstars were encouraged to tell us their lives, and Won’t You be my Neighbor?, which concentrated far more on Mr. Rogers’ philosophy than his life, may be the perfect person to compassionately engage with the complex personality of Anthony Bourdain. Working with CNN, Bourdain’s last broadcaster, Neville was able to access a plethora of material ranging from press coverage and interviews when “Kitchen Confidential” launched the comparatively naïve author to stardom to footage of A Cook’s Tour, the TV series where the writer turned into a confident host to No Reservations and Parts Unknown, the shows that often became essays of cultural, not just culinary, magnitude. Rather controversially, Neville also used old footage of sounds and images to create, via computer technology, statements about his life and death that Bourdain never made.

In the film, we’re allowed into Bourdain’s inner circle including chefs David Chang and Eric Ripert, musicians Allisson Mosshart and Jamie Hince of The Kills, Iggy Pop, and Josh Homme, and the artist David Cheo. For the doc, it was imperative to have the cooperation of Bourdain’s producers Lydia Tenaglia and Chris Collins, who helped him to come up with his swaggering yet insightful television persona and were there every step of the way as he grew to become a major media personality. Even his second wife, the remarkable Ottavia Busia, who challenged Bourdain and bore a daughter whom he doted upon, offers up stories of their romantic lives together.

So the story is told of the well-loved Bourdain, un homme des peuples (a man of the people, a phrase that evokes his humanity and French ancestry), who somehow gave up on himself and those who loved him. Grafitti artist David Cheo was so devastated that he didn’t cut his hair and beard for over two years. Everybody interviewed is still upset over Bourdain’s demise. His mother was shocked, as was Ottavia. Asia Argento, his last love, the movie star and director whose rape by Harvey Weinstein spurred on the #MeToo movement and was embraced by Bourdain, could easily be palmed off as the motivation for the suicide.

But nobody wants to blame this tragedy on Argento or, by proxy, Weinstein. Suicide is the great imponderable. Why did he do it? An ex-junkie, hooked on food, sex and travel, perhaps Bourdain couldn’t see anything interesting anymore in pursuing pleasure. Maybe the best of everything isn’t enough if you don’t care at all. Or if you’ve run out of energy and passion. When that happens, brother, it’s time to go.

Kudos to Morgan Neville, who poses more questions than he answers. Bo Diddley, the legendary rocker, wrote in the song Roadrunner, “you said you’re fast but it don’t look like you gonna last.” I’m afraid that he was right about the immensely gifted Anthony Bourdain. We’ll never know why but we’ll miss him. And we’ll enjoy the Neville doc that tries to answer the mystery that ends Anthony Bourdain’s story.

Can You Bring It: Bill T. Jones and D-Man in the Waters

Dance may be the most ephemeral of all the performing arts but that’s part of its poetry. If you’re not there during the performance much will be lost: the choreography, the dancers, the music, the overall feeling and philosophy can’t truly be captured on film. Nor can the historical moment that compelled the artists to create their work. That time has passed. But the beauty of dance, of choreographers working with performers, can produce miraculous collective endeavours, which will move us on film, across space and time.

Can You Bring It: Bill T. Jones and D-Man in the Waters is an extraordinary documentary that evokes a great dance performance inspired by the AIDS crisis and brings it forward to a period just before COVID and BLM changed the world again. Rosalynde “Roz” Le Blanc, the film’s co-director, head of the dance department at Loyola Marymount College and former dancer at the Bill T. Jones/Arnie Zane dance company, is the inspiration for the film, which mines her past and informs her didactic, professorial future.

In Le Blanc’s doc, co-directed by legendary doc cinematographer Tom Hurwitz (Pavarotti, Joan Didion: the center will hold, The Jazz Loft), we see young dancers being inspired by a tragic past that hadn’t been made important in their lives as children or young adults. AIDS, which defined a generation, is barely spoken about now. Hundreds of thousands—in the end, millions—died of it. Stars like Rock Hudson, Keith Haring and Freddie Mercury succumbed to the disease. As a 16-year-old, Rosalynde was so moved by the crisis and Bill T. Jones’ choreography for D-Man in the Waters that she joined the troupe.

For the public in the early ‘90s, reeling from the shock of so many people dying of AIDS, the popular cultural references became Randy Shilts’ brilliant book And the Band Played On, the Tom Hanks Oscar winning film Philadelphia and the main work from its soundtrack, Bruce Springsteen’s song Streets of Philadelphia. For those in the know—but not everybody–one of the true great works was Bill T. Jones’ D-Man in the Waters, which he brilliantly choreographed to the music of Mendelssohn’s String Octet in E-Flat Major (Opus 20.

The film goes into the past to evoke the relationship between Jones and Arnie Zane. In 1971, Bill T. Jones, a Black track athlete at Binghamton University met Zane, a photographer, and recent grad of the institution. They fell in love, found a common ground in dance, became part of a collaborative performance group called the American Dance Asylum and by 1979, were ensconced in Manhattan. There, they founded one of the key post-modernist dance troupes, the Bill T. Jones/Arnie Zane dance company. During the ‘80s, they created and mostly presented such wonderful works as Secret Pastures, Blauvelt Mountain and Ritual Ruckus (How to Walk an Elephant).

Then, Zane was diagnosed with AIDS and all too soon, died of it, in March 1988. Devastated, Jones didn’t know what to do; neither did his small, dedicated dance company. In the end, Jones decided to keep the troupe together but soon after, they had to deal with yet another tragedy: the young, brave, crazy dancer Demian Acquavella, had become ill with AIDS. Jones had an inspiration, to make a piece about AIDS that would focus on Demian “D-Man” and, in a way, Arnie Zane, but would be, in general, about how people should respond to the crisis.

The choreography Jones created for D-Man in the Waters is, in comparison, less technically difficult than some of Jones and Zane’s earlier works. It’s all about trusting in your mates, almost falling down, and being picked up by the rest of the troupe. The metaphor is clear but Jones came up with a myriad of ways to disguise it as the dancers moved in patterns across the stage. As D-Man reaches its climax, the group has to intervene to save the individual. As they raise him up, flinging him upwards, the piece reaches a moving conclusion that surely helped to garner the work the prestigious New York Dance and Performance “Bessie” Award that year. It has since been performed by universities and dance companies across the U.S.

In the film, the drama is about Roz Le Blanc’s class of mainly privileged white dancers, accompanied by some “minority” performers, learning how to trust each other and more importantly, to confront the world. Luckily for them and the film, they meet Bill T. Jones, who dominates the best scenes. In an early one, he gives a master class in instructing and inspiring one of Roz’s students to dance with a stronger focus. Even better is a sequence where he talks about AIDS: what it meant to him and the dancers as they confronted daily the death toll that was affecting them. Jones is a wonderful speaker, who is precise in his storytelling while being intensely personal. One can see that Le Blanc’s students are deeply moved by his talk.

The film, which had moved from the present—Roz’s class beginning to work on the dance—to historic footage of the Jones/Zane company dealing with AIDS and working on the premiere of D-Man, returns to Le Blanc and her students. Having been taught well by Le Blanc and inspired by Jones, the young dancers create a technically fine work in rehearsals. Here is where the doc and dance take off. Le Blanc gives a stinging speech in which she inspires her neophytes to create their own community for the dance. Though they don’t truly understand the AIDS crisis, they rise to the challenge for a night. Using historic and contemporary footage, the finale for both performances is filled with high emotion as the dancers, past and present, “bring” D-Man in the Waters to a fitting conclusion.

Can You Bring It: Bill T. Jones and D-Man in the Waters is a truly emotional documentary, filled with great dance and music. I can’t recommend it too highly.