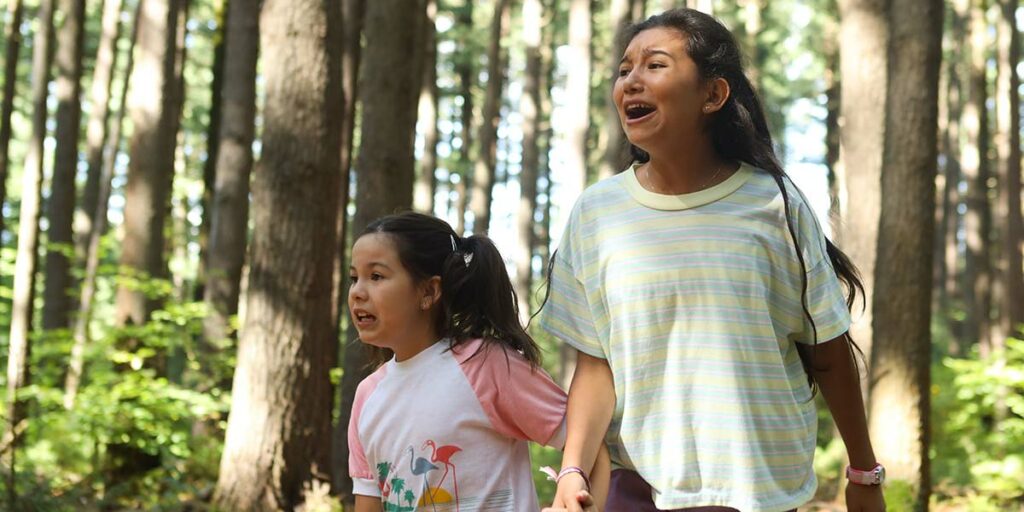 Mixing the personal with the political, Tracey Deer has made a tough and engaging first feature film with Beans. It’s set in the summer of 1990 when the Oka crisis stirred the nation and the young Tracey Deer, living in that area of Quebec, was only 12. The events of that summer changed Canada, Indigenous people and in this terrific dramatic film, the lives of a family of Mohawks who lived in the area

“Oka” is history that we all should know. The Mohawk people reacted with outrage when the town of Oka decided to expand a golf course over their sacred burial grounds. When the Mohawks took over the land, which they regarded as their own, to prevent the course from being built, a pitched battle took place and one Quebec police officer was killed. A very hostile barricade was erected to prevent further bloodshed, with Mohawks on one side and police on the other, and the closest that Canada had to a war with Indigenous people in the 20th century took place.

In Beans, the events that played out during that hot summer serve as an intense backdrop to what happens to an Indigenous family living in the area. 12-year-old Beans is the bright but shy daughter of a loving First Nations family, who are supportive of the Mohawk cause. Beans, her little sister Ruby and their very pregnant mother Lily find themselves to be the subjects of racism as the Quebecois in the neighboring towns unleash violence against them. As the Mohawks in the forested area around the course and in their recognized native land (aka reservation) continued their resistance against the authorities, which eventually included the Canadian military, people like Beans’ family weren’t allowed to buy food at grocery stores and found themselves being cursed wherever they went. An effigy of a First Nation’s person was burned publicly and, terrifyingly, Indigenous people—mainly women and children—had rocks thrown against their cars, breaking windows and causing huge trauma and pain as they tried to travel from Oka back home from the Mercier Bridge.

Deer dramatizes these events, turning them from scenes viewed in documentaries or news reports, into truly appalling situations that must have terrified a generation of Indigenous people in the area and beyond. We witness the bravery of Bean’s father and mother, who like so many members of the Mohawk community—the Akwesasne, the Kanesatake and Kahnawake—kept the resistance going in rural Quebec. The politics of the stand-off is made clear as is the hatred towards Indigenous people in Quebec (but let’s face it, would it have been any better elsewhere in Canada).

Still, Deer has higher ambitions for her film than to make another docu-drama. Beans is at heart a coming-of-age film, in which a 12-year-old begins to assert herself as an adolescent willing to take on her identity as a person beyond her family and as a young woman aware of her sexuality. Much of the film takes place at Beans’ home and neighbourhood, where she has become friends with the tough April and her brother Coyote. She learns how to be stronger in her speech and actions. In a fascinating, problematic scene, she has to deal with desire and how it’s manifested among teens and even pre-teens. While adults conduct wars, children and teenagers still have to confront their lives: it’s a lesson in Deer’s film that resonates with anyone who has had to grow up during a crisis.

Beans benefits from a fine cast, who give authentic performances in roles set 30 years in the past. As Beans’ parents, Rainbow Dickerson and Joel Montgrand are terrific as is Paulina Jewel Alexis as April. But the film lives or dies on the acting of Kiawenti:io as Beans—and she’s a revelation, charming and charismatic and compelling as the lead Deer needed her to be. The director chose her very well.

The winner of Best Picture at this year’s Canadian Screen Awards, Beans has garnered prizes from the Directors Guild of Canada, the Kingston Canadian Film Festival, the Vancouver Film Critics Circle, the Vancouver International Film Festival and the Writers Guild of Canada. While Beans is Tracey Deer’s first feature, she has already been acclaimed for her TV series Mohawk Girls and excellent documentary work including the Gemini Award winning Club Native. It’s no surprise that the film is impressively directed, acted and scripted: Deer is obviously a fine director in whatever genre she chooses to pursue.

Beans is a film well worth seeing. Deer deserves accolades for being brave enough to have made it. For those who want to know more about Oka, may I recommend Alanis Obomsawin’s award-winning NFB documentary feature, Kanehsatake: 270 Years of Resistance, which she shot during that historic summer.