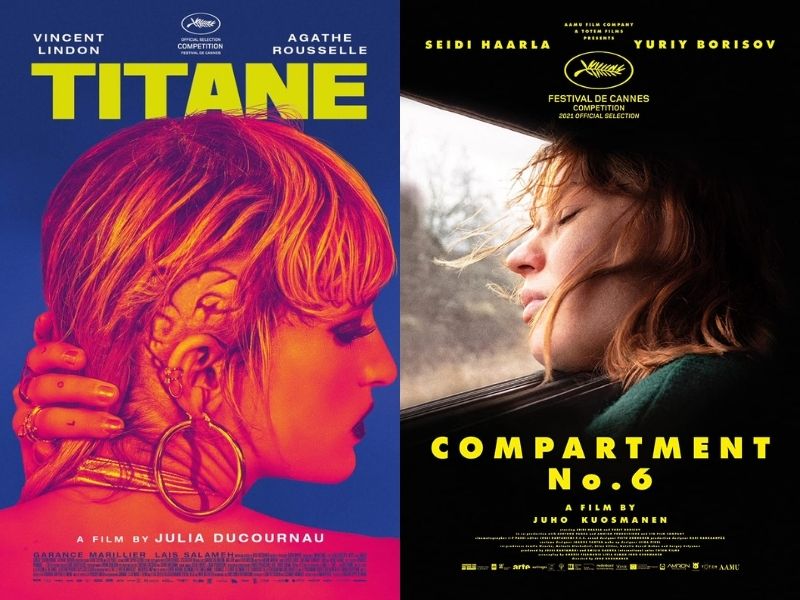 Five top films from this year’s Cannes Festival are among the most provocative and fascinating prestige pieces on view at TIFF 2021. That they won at Cannes, still the preeminent film festival, speaks to their high quality. And that they’re from five different countries, with unique filmic histories, shows the global perspective that unites TIFF with Cannes and the better festivals in the world.

The jury at Cannes led by Spike Lee shocked attendees and critics with their choice for the top prize, the Palme d’Or. Titane, directed by France’s Julia Ducournau, is a truly bizarre film, one that will divide audiences at TIFF. That it’s brilliant cinematically is without a doubt but the storyline is more than a bit strange. Agathe Rousselle plays a sports car fashion model, who is erotically fascinated by the high-end vehicles. As a child, she had been the victim in a car crash, leaving her with a titanium plate in her head. Now she’s a cult figure—and, it turns out, a killer. On the run from her crimes, she meets up with a firefighter played by the great Vincent Lindon, who decides that she’s his lost boy. The compelling relationship between the two is familial, almost romantic and astonishingly beautiful. Love it or hate it, this is the kind of film that breaks barriers and is the perfect material for outré festival enthusiasts.

Cannes’ prize categories are unique. Normally a Grand Prix is given for the major film at a festival. Here it’s the second prize and this year two films—Compartment No. 6 and A Hero–shared the award, making them effectively the #2 and #3 semi-champs of the year. It’s crazy to rank wonderful films numerically but it suggests how effectively both films are, both aesthetically and as stories. Compartment No. 6 by Finnish director Juho Kuosmanen is a duck-out-of-water tale set on a train traveling from Moscow to Murmansk. Laura, a Finnish archeology student, has decided on a whim to travel to nearly the Arctic Circle to see the ancient petroglyphs—rock paintings—that have been preserved there for 10,000 years. On the train, she meets Ljoha, a young Russian who is going to Murmansk for a more prosaic reason, to get a job in a mine. Kuosmanen paces the film well, moving from a dramatic scene to a humorous scene, capturing the rhythms of a train as the odd couple get to know each other.

I had suggested last week that A Hero would be a film that people who enjoy mature foreign films will enjoy—and it certainly has impressed me. The new film by Iranian auteur Asghar Farhadi is a character study, a stinging social satire and a brilliant allegory. The story revolves around Rahim, played with charm and a sweet smile by Amir Jadidi, who discovers that no good deed can go unpunished. An artist and calligrapher, Rahim is a modern-day Candide, trying to be optimistic in a world that is too often selfish and cynical. Farhadi’s targets in the film include charities, penal institutions and the overwhelming importance of money in society. The plot, which is fiendishly intricate, is best left to anyone who is willing to see the film unfold. Farhadi, the successor to Abbas Kiarostami as Iran’s leading filmmaker, has crafted another fine film.

Drive My Car, the winner of the Best Screenplay Prize at Cannes, is a wonderful adaptation of a story by the acclaimed author Haruki Murakami. Ryusuke Hamaguchi wrote and directed the film, which elaborates on the ideas and atmosphere of Murakami’s original. It’s a wonderfully complex narrative revolving around love, death, sex, and the theatre. Set mainly in Hiroshima, though other Japanese locations are used wonderfully well, the action flows through an actor and theatre director, the middle-aged but still vigorous Mr. Kafuku (Hidetoshi Nishijima), who is directing his adaptation of Chekov’s Uncle Vanya for a festival. He casts in the role of Vanya a young actor, who was a protégé of his late wife, Oto. He, in turn, is forced to accept a young female driver, who the festival administration insists on employing. While the drama mainly unfolds between these three, many other characters are brilliantly etched in, particularly Oto, who is absolutely prominent throughout the first third of the film. This is a terrific film, which I highly recommend to festival goers since it has not been picked up for Canadian distribution yet.

Last week, I guessed–correctly–that Apichatpong Weerasethakul’s Memoria would be an impressive film in TIFF’s line-up. One of the winners of Cannes’ Jury Prize along with Nadav Lapid’s Ahed’s Knee, which I will see this week, Memoria is the Thai auteur’s first film made outside of his country. Set in Colombia, the film features Tilda Swinton as a market gardening specialist in Medellin visiting her sister in Bogota, who is sick and staying in a hospital. The film starts abruptly with a sound that resembles a sonic boom. Swinton becomes obsessed with figuring out where the sound is emanating from and what meaning it has—if any. This is Weerasethakul’s artistic turf: confronting and trying to deal with mysterious forces. Only this time he has Swinton, who makes even the murkiest of scenes into something extraordinary. Memoria is another TIFF winner—as it was at Cannes.