Film Review: West Side Story & Being the Ricardos 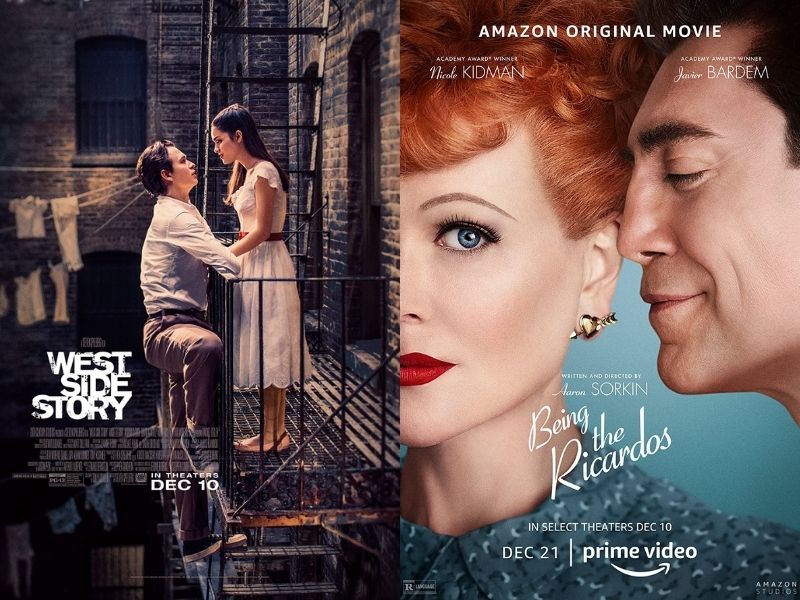 Tony Kushner, script based on the Broadway musical: book by Arthur Laurents, choreography and direction by Jerome Robbins, music by Leonard Bernstein, lyrics by Stephen Sondheim

Adaptation can be a cruel business.  Take a classic and rework it in a way that seems right to you but wrong to the critics and watch as your project goes up in flames. Treat a terrific old work with reverence and get ready to be dismissed for bringing nothing new to something everybody already admired. That doesn’t stop people from attempting to remake work for personal and professional reasons—either because they love the original and want to do it better, or they figure that a previous hit is bound to attract the public again. And, of course, there are those rare examples when something terrific is clearly improved by a new creative team: True Grit by the Coen Brothers with Jeff Bridges outstrips the John Wayne/Henry Hathaway version as does Soderbergh/Clooney/Pitt Ocean’s 11, which is far hipper than the Sinatra Rat Pack original.

How does Steven Spielberg’s new version of West Side Story compare to the Robert Wise/Jerome Robbins multiple Oscar winning 1961 film version? There aren’t many around who will have seen the 1957 Broadway production, the true original, nor is it fair to compare either version to “Romeo and Juliet,” which was the inspiration for the play and the films, so the films will have to do. West Side Story is a robust musical shot in a grand manner both times, with choreography that emphasizes the movement of groups engaging dynamically with huge urban backdrops. Like the dancing, the music is deliberately epical with the big ballad “Tonight Tonight” contrasting with the satire of “Gee, Officer Krupke” and the upbeat/rueful politics of “America.” The boldness of the songs and choreography is matched by the tragic love affair between Tony and Maria, who try for peace in a situation fraught with anger and violence.

Spielberg has the wit to keep many of the elements that have made West Side Story so compelling for generations of theatre and cinema goers. It’s above all a musical—one of the best produced in the 20th century—and it would have been foolish to try to update Leonard Bernstein’s music and Stephen Sondheim’s lyrics. Spielberg contents himself with having David Newman do a technically more robust score adaptation and asking the brilliant Gustavo Dudamel–the right choice–to make minor improvements to what Bernstein did himself with the New York Philharmonic over 60 years ago. The immensely talented Justin Peck’s choreography is understandably respectful of the work by Jerome Robbins, who was the director of the entire theatrical production and co-director of the film. So, although Spielberg’s choices for musical and dance collaborators is superb, there’s not much they have to do to improve on what was already excellent in 1961—and, indeed, 1957.

There is something major that needed revising, however, and Spielberg has taken pains to address it. Arthur Laurents’ book for the original play was seamlessly adapted by Ernest Lehman for the 1961 film but has been notably rewritten by Tony Kushner for Spielberg. Updating the feud of the Verona families, the Montagues and Capulets, from 1400s Italy to 1950s New York required major thinking by Laurents and the initial creative team. Juvenile delinquency and street gangs were a modern phenomenon then; conservative Americans were thunderstruck by the anger manifested by youths, especially those from impoverished and racially demeaned areas in cities. The coup was making the play relevant to the public by turning the angry families into two gangs, one Puerto Rican and the other “white.” Even at the time, some people must have wondered, why not make the whites into an ethnic group? Or make the battle between Blacks and Puerto Ricans? The answer, I’m sure, is that having one ethnic group was enough; two would have made the play too controversial.

What’s happened over the more than six decades since the play first hit Broadway is a growing resentment towards the treatment of the Puerto Rican community in a work that is supposed to extol America even with its imperfections. The anger is so widespread that the writer Carina Del Valle Schorske expressed the opinion in the NYTimes that she hopes the film “will flop so we can move on.” Kushner, with Spielberg’s approval, has come up with a far better solution. This version of West Side Story foregrounds the Puerto Ricans: Maria, Bernardo, Anita and their friends are given lives and conflicts and get to express themselves mainly in Spanish—with no subtitles. This script gives us insights into the lives of people, who have moved to New York from an impoverished American territory, which is still badly treated by the federal government. Their choice—it’s clear—is whether to cut back on their language and culture to fit into New York or go back to a home, which can’t sustain them.

Of course, the love story between Tony (now identified as a “Polack”) and Maria still forms the centre for the tragedy of having prejudice and fear triumph over love and understanding. But now the story of Puerto Rico and the immigration to New York (and other places in the U.S.) is made into a very important element of the story. Kushner and Spielberg place the drama back in the ‘50s so they can develop another theme, which isn’t really explored in the original play. The “west side” of the story was actually being torn down during this period to build Lincoln Center and transform a funky, poor but very real neighbourhood into an upscale ghetto for the rich. It was, in its own way, the beginning of what happened to most of Manhattan in the past twenty-five years as gentrification has homogenized a borough that used to be famous for its diversity and eccentricity. Kushner and Spielberg deliberately stage dances and dialogue scenes in the midst of the rubble of a neighbourhood that is being ripped down in front of the local inhabitants.

With all of the music and dance intact, the transformed West Side Story is relevant for a new audience. It is truly a fine adaptation of a brilliant original. Kudos to Spielberg, Kushner and a great team of creative artists, including the terrific performers. This is a film to be seen and relished.

Lucille Ball is justly acclaimed as one of the best female comics of all time and an innovative TV producer, but her life and career seems to be an unusual choice for Aaron Sorkin to make into a film. Acclaimed for such TV shows as The West Wing and The Newsroom and the films A Few Good Men and The Social Network, Sorkin is a great scriptwriter whose work is often political and almost inevitably dramatic. So why take on Lucille Ball and Desi Arnaz, partners in life and the stars of the hit 1950s television show I Love Lucy?

It turns out that Ball did face a political crisis in the early Fifties. During the height of the Red Scare, when right wing politicians were scoring big points with the public by charging entertainers, educators, artists, bureaucrats and many other liberals with being Communist sympathizers, it was revealed that Lucille Ball had registered as a member of the Communist Party in 1936. She had done so to honour her left-wing grandfather, who was a radical, and raised her up beautifully as a child. But such a gesture was hardly understood by the Fifties and Ball’s show and career was on the line when she was investigated by the House Unamerican Activities Committee.

Obviously intrigued by Ball and the early days of TV, Sorkin has taken that episode and placed it in a week when she was being publicly humiliated by a trashy tabloid for Desi Arnaz’s alleged philandering and trying to put on a great show for her television and studio audience. A man of Sorkin’s reputation can put together a great cast and he certainly has assembled a famous one, with Nicole Kidman, as Lucy, the real-life actress and madcap wife in the TV series; Javier Bardem essaying the part of the real Desi and the band leader  husband of the “Ricardo” family (their fictional name for the show); Oscar winner J.K. Simmons taking on the role of William Frawley and the fictional neighbour Fred Mertz and Nina Arianda performing as actor Vivian Vance and Lucy’s pal Ethel Mertz. Production values are high throughout, and the sense of the period is well maintained, all of which makes the film quite watchable.

The key problem with Being the Ricardos is that neither Kidman nor Sorkin is particularly good at switching from the drama, which plays out reasonably well, to the comedy that is at the core of Ball’s art. Quite simply, Kidman isn’t funny, and neither is Sorkin. And when that happens, you can’t fake it: you either laugh or you don’t. This was Sorkin’s challenge with his 2006 show Studio 60 at Sunset Strip, which was supposed to be about Saturday Night Live and quickly descended into a pretentious melodrama. If you can move from drama to comedy, as Billy Wilder used to do, you’re golden. Aaron Sorkin is many things but Wilder he is not.

It was shocking to see that Sorkin’s team hadn’t done proper research on Ball’s career. It’s a great idea to give her back story as a Hollywood B movie star in the 40s, but it’s important to get your facts right. Ball wasn’t replaced as a leading star at RKO in the early 40s by Rita Hayworth and Judy Holliday. Hayworth became #1 box office at Columbia and Holliday didn’t have a major film role until MGM’s Adam’s Rib in 1949. Nor was Ball a washed-up celebrity with only a radio show as a hit before TV execs came to pitch her on doing a show for CBS. In the two years preceding I Love Lucy’s debut in 1951, Ball starred in five feature films, two with Bob Hope, one with Red Skelton and one each with William Holden and Victor Mature.

Sorkin does a fine job evoking what TV comedy was like in the ‘50s. The writers’ room was important to Ball and Arnaz as it was to Sid Caesar and Milton Berle. You get the sense of the zany competitiveness among the show’s writers, whose living was based on how inventive and funny they could be, week by week. Putting together a series with a demanding schedule was problematic and made all that more concerning because Frawley and Vance really did hate each other and Arnaz was actually a womanizer and heavy drinker, which was stressful for Ball. Having a show play well before a live audience while being simultaneously broadcast on TV set the pattern for future comedies—and was clearly difficult to do.

While Being the Ricardos isn’t the hit Sorkin and Kidman wanted, it should engage audiences on TV, who will have lower expectations and might enjoy this interesting if slow evocation of America celebrity culture in the ‘50s.