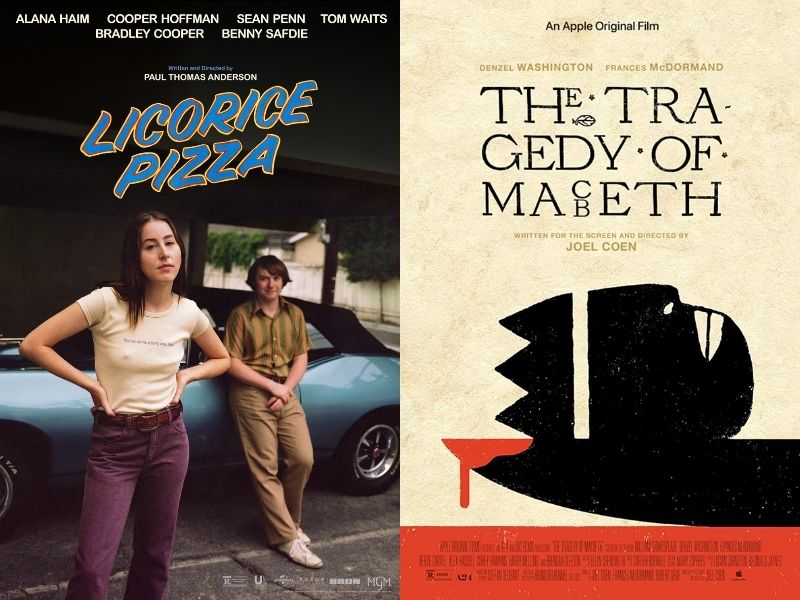 Hits for the Holidays

Licorice Pizza & The Tragedy of Macbeth

The year is 1973 and the place is San Fernando Valley, California. The hippie era is over and the disco one hasn’t begun. Nixon and Watergate might be on television every night, but young Californians are more concerned about gas shortages. It’s a great time to be in your teens or twenties provided you’re well off and white.

Welcome to the world of Licorice Pizza, the new Paul Thomas Anderson film. The director of such heady fare as The Master and Inherent Vice has decided to let us off easy this time. He’s delivered an off-kilter charmingly meandering romantic comedy about Guy, a 15-year-old actor, who somehow picks up Alana, an attractive 20-something woman, who is at his high school working on the photos for the yearbook. He persuades her to go to dinner with him and start an ambiguous friendship, which plays out uncertainly but intriguingly throughout the film.

As played by neophytes Cooper Hoffman (Philip Seymour Hoffman’s son) and Alana Haim (of the singing sister group the Haims), the awkward rapport between the two is tentative at first but keeps them (and us) engaged as random events take place. What random events? Well…

Never bored, Guy ditches his floundering career as an actor to start his own waterbed shop just as the craze begins to hit the Valley. Naturally, he hires Alana, who quickly becomes his business partner. Since she’s old enough to drive, it’s Alana who takes Guy to deliver a waterbed to the notoriously crazy Jon Peters (played by Bradley Cooper), the hairdresser and film producer who was then going out with Barbara Streisand. Their bizarre encounter with Peters (who allowed Anderson to use his name), involves driving a truck backwards down a hill and wrecking a waterbed in a mansion but is easily matched by a drunken motorcycle stunt outside a restaurant by “Jack” Holden (based on William Holden and played by Sean Penn), which only marginally involves Alana and Guy. Before the film reaches its denouement, Guy has set up a hot new penny arcade and reunites with Alana, who was temporarily entranced by a local closeted liberal politician (played by Benny Safdie.)

It’s all strange goings-on but riveting and, in part, true. The improbably gifted Anderson could be criticized for engaging in nostalgia but while he’s been accused of being the unofficial mayor of the Valley, he was actually born in 1970. So, this is nostalgia for the Anderson that never was or, as he has admitted in interviews, an improvisation based on the life of his friend Gary Goetzman, a producing partner of Tom Hanks, and who is the right age to be Guy Valentine. It’s Goetzman, who was a child actor, waterbed entrepreneur and penny arcade owner before he became a producer on Stop Making Sense, the hit Talking Heads concert film directed by Jonathan Demme in 1984.

Not that this is a biofilm of Goetzman. He just inspired most of Guy Valentine’s shenanigans. As for the relationship between Guy and Alana, we can assume that Anderson came up with that part of the story.

It’s hard to put a handle on Licorice Pizza. Just like the title, it’s strange, doesn’t make much sense but is appealing. Will we see more of Cooper Hoffman, who is young, charismatic and, yes, strangely resembles his dad? Hope so. As for Alana Haim, I enjoy the music she makes with her sisters but I don’t think she’ll do much in movies unless Anderson decides to feature her again. Licorice Pizza is an odd film that is perfect for a very odd holiday season.

The Tragedy of Macbeth

Joel Coen, director and writer from the play by William Shakespeare

It’s tough to call a film a masterpiece when its creators so clearly intended for that to be the case. Let’s admit that the Joel Coen-Frances McDormand-Denzel Washington version of the Scottish play is an eye-and- ear-catching extravaganza which absolutely commands your attention. It does that while neatly abridging Shakespeare so that the plot of a Scottish warlord’s murder of his king and takeover of their country moves seamlessly from high point to high point, breathlessly offering a claustrophobic vision of the nightmare wrought by the Macbeths. There are moments when one feels that Coen and company have made too much of a high wire act out of a Shakespearean classic, but it must be admitted that they have pulled off their coup. This version of Macbeth will certainly excite audiences and make them think about the ramifications of the play.

Kudos must go to production designer Stefan Dechant and cinematographer Bruno Delbonnel, who have collaborated with Coen to put this compelling and other worldly Macbeth on the screen. There are few films that have looked this theatrical or used space so deliberately since the heyday of such auteurs as Eisenstein and Welles. The deliberately artificial sets and gorgeous black and white design turn the drama into one of metaphor and allegory. This is a tale of ambition and what it can cost even the most noble of people if principles and the basic verities of life are abandoned.

With the drama designed for theatrical effect, it falls on the main players, Denzel Washington as Macbeth, the warlord who gives in to his desire to be king, and Frances McDormand, as his Lady, just as ego-driven and willful as him, to dominate the proceedings. And they do brilliantly well: rarely have Shakespeare’s soliloquies been as well thought out and delivered as in their renditions. Surely Oscar nominations will go to both of them as well as to Kathryn Hunter, whose interpretation of all three of the play’s prophetic witches is as startling as it is visually and verbally arresting.

Joel Coen’s The Tragedy of Macbeth is truly a film for the ages and one of the finest works of the year. It is a “must see.”