Film Review: All My Puny Sorrows & Fantastic Beasts: The Secrets of Dumbledore 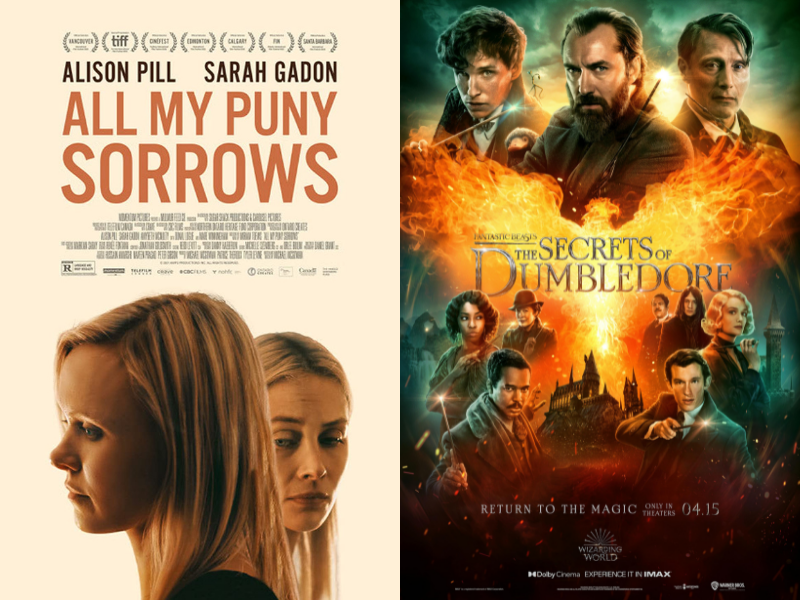 Film Adaptations for a Holiday Weekend

All My Puny Sorrows and Secrets of Dumbledore

All My Puny Sorrows

Michael McGowan, director and writer based on the novel by Miriam Toews

Death stalks the gifted Von Riesen family. Mainly suicides, although there’s a fatal heart attack and a messy divorce thrown in for good measure. To know the Von Riesens is to love them and you do: that’s the narrative’s expectation (in both film and book), as their tragic fates unfold. So goes the acclaimed novel by Miriam Toews and director-writer Michael McGowan follows her lead to perfection in his film adaptation of the very Canadian All My Puny Sorrows. The question that dogs this brilliant melodrama, so well-acted and shot, is a basic one: do you want to spend your time in the throes of psychological misery?

Perhaps this is a pandemic issue, one that wouldn’t have been raised a couple of years ago. Now I’m wondering if audiences will want to extend as much empathy as Alison Pill’s Yoli Von Riesen, a struggling novelist, does to her sister Elf (Elfreide), who has become a phenomenally successful pianist but wants to end her life. It is up to Yoli and, to a lesser extent, their mother Lottie, to come up with reasons why Elf should live.

As the story unfolds, we discover that Elf always identified with her dad, Jake, an idealist, who found their Methodist community too traditional and narrow-minded but struggled to find ways to open it up. In the end, he committed suicide and it clearly turned his daughter Elf into someone who is spiritually and emotionally anguished.

At the core of All My Puny Sorrows are the scenes between Alison Pill’s Yoli and Sarah Gadon’s Elf. Loving, intelligent and committed to each other, the two sisters’ debates are searing and emotionally compelling. As played by Pill, Yoli is immensely charming but her ability to deal with society only reinforces her masquerade. She is devastated by her life: poor choices, fights with her daughter, a difficult writing career and an impending divorce, all indicate that she has not done well enough so far.

Gadon performs Elfreide as a star—withdrawn from the world, gifted, awesomely intellectual and brilliantly well-read and, of course, an internationally acclaimed pianist. Yet none of this has been enough to extinguish the bitter sorrow at the core of her soul. How is it that someone so gifted—and let’s admit it—beautiful, would want to end her life?  For contemporary art and photography lovers, it’s the essential question around Francesca Woodman, the immensely gifted and beautiful artist who committed suicide at the age of 22. For lovers of literature, it’s the question of Virginia Woolf’s demise though one can easily include Sylvia Plath as well.

What turns someone from loving life to embracing suicide? There’s a fine moment in the film when Elf talks about waking early in the morning, embracing the dawn, hoping for equanimity but finding none: only sorrow. It’s a wonderful sequence and Gadon plays it well, as does Pill, who understands (at least for a moment) what her beloved older sister is saying: death is in her body, in her soul.

Elf wants to die, and she would prefer to do so with her sister. She wants to travel to Switzerland with Yoli, so she can go with dignity accompanied by the person who loves and knows her best. Yoli really needs Elf and resists her horrifying suggestion at first and then takes too long to engage with it, intellectually. If there’s a core to the drama in All My Puny Sorrows, it’s in Elf’s choice (which we never see) to let Yoli free while she makes her own devastating decision.

Literature plays a key role in All My Puny Sorrows. Elf is a lover of poetry and novels and, of course, Yoli is a novelist. Throughout the film, great writers and writings are referenced: the Portuguese author Fernando Pessoa (and his masterpiece Book of Disquiet), the Symbolist poet Paul Valery, Virginia Woolf’s essays especially A Room of One’s Own and the opening paragraph of D.H. Lawrence’s Lady Chatterley’s Lover, which begins: “Ours is essentially a tragic age, so we refuse to take it tragically. The cataclysm has happened, we are among the ruins.” Even more sorrowful is the poet Samuel Coleridge:

“I too a Sister had, an only Sister —
She lov’d me dearly, and I doted on her!
To her I pour’d forth all my puny sorrows.”

My question remains: how much time will an audience give to this well wrought, very White, very middle-class melodrama? I suspect that releasing All My Puny Sorrows on Easter weekend is tantamount to admitting that this film is unlikely to make money theatrically but will recoup its costs on streaming services. But as a reviewer, I have the safety to say: this is a strong film that should be seen—some time.

Fantastic Beasts: The Secrets of Dumbledore

While viewing Fantastic Beasts: The Secrets of Dumbledore, it occurred to me that someone new to the third installment of J.K. Rowling’s prequels to the beloved Harry Potter series would have very little idea as to was happening while watching the film. Apparently, there are a lot of magicians in our world, who refer to us, dismissively, as Muggles. Two of them—Dumbledore and Grindlewald—were adolescent lovers, bound to never attack each other, but they’re now obsessed with choosing the best successor for the position of Supreme Mugwump, head of the all-powerful magicians’ guild. Since Dumbledore and Grindlewald refuse to fight each other, the entire film revolves around what their henchmen (or is it hench-people) can do to influence who gets elected.

It’s not Trump vs. Biden and hardly Zelensky v. Putin. But, hey, we’re at the movies!

Important events in the real world have taken place since the Fantastic Beasts series was launched in 2016. Let’s cast our minds back then, to the days before COVID and J.K. Rowling’s attack on transgendered people, causing her loss of iconic status as a writer of magical texts and nothing else. As far as that goes, why don’t we remember when Johnny Depp, the initial Grindlewald, was a beloved figure?

Five and a half years ago, Fantastic Beasts offered a fresh opportunity for audiences to re-enter the magical world of Harry Potter, one which had become globally popular. It gave Rowling the chance to work as a scriptwriter instead of a novelist and to create a new set of characters and situations while occupying the universe she had imagined so successfully in the Potter franchise.

The first film, Fantastic Beasts and Where to Find Them, staring Eddie Redmayne as the brilliant but introverted magician and writer Newt Scamander, did wonderfully well at the box office, grossing over $800 million worldwide. Rowling and director David Yates introduced likeable character actor Dan Fogler as everyone’s favorite Muggle (or human), the baker Jacob Kowalski and Katherine Waterston and Alison Sudol as the magical Goldstein sisters, Tina, whom Newt quietly adored and Queenie, the more loudly declared pick of Jacob.

Realising that some touchstones would be needed to keep Potterites intrigued, Rowling has gradually built a story around the fantastic life and career of Albus Dumbledore before he became headmaster at Hogwarts, the institution that taught Harry and his mates Ron and Hermione so well. You can see why he brought Dumbledore into the story and introduced his arch-rival and former lover, Grindelwald. As Rowling did by refusing to have Harry and Hermione fall in love with each other, she’s flaunted the rules of storytelling to no good effect.

When she created Fantastic Beasts, Rowling made her protagonist, Newt Scamander, a painfully shy British scientist—oops, magician. What did she think would happen? Eddie Redmayne, a fine character actor, who can play lead roles—even, J.K., transgender parts (has she seen The Danish Girl?)—has been given no clue how to make Newt into the series’ protagonist. We see him in the film, humble and barely able to speak, but still able to save his brother and help Dumbledore to make things right in the world of magicians. That’s wonderful—but after three films, Newt is still so introverted that he can’t even ask Tina to stand near him when her sister is getting married.

Since a franchise can’t spin around Newt, who is left? Well, there’s Dumbledore, and Jude Law plays him well enough. But, at least in this film, Law’s character is a nice guy—a future Hogwart’s headmaster—but not someone who you root for throughout a series. Who’s left? Dan Fogler’s Jacob Kowalski is the Muggle everyone likes but he’s not the guy to lead a franchise based on magic. Rowling misses the opportunity to build up the Black witch Prof. Lally Hicks and the Senegalese wizard Yusuf Kama: both could have been far more central to the plot. So could the Brazilian candidate Vicência Santos, who seems attractive and smart. (Should Fantastic Beasts be more diverse? It’s not a bad idea.)

Fantastic Beasts: The Secrets of Dumbledore is fine, in its way, but I doubt that it will excite even long-time supporters. There are set pieces, the most brilliant of which is placed in a demonic prison, guarded by truly scary crustaceans and other creatures you might expect to encounter in a wet dark cave. Newt has to save Theseus and, as the film demonstrates, it ain’t easy.

This Dumbledore film in the middle of a franchise. Assuming it isn’t a flop, and the rest are made, there will be two more before it’s concluded. The film that Rowling has made with director Yates, co-writer Kloves, a brilliant technical team and fine character actors, is good enough to keep the series going—I think. There will be disappointment among viewers who are new to the series and even long-time supporters might find the great Danish actor Mads Mikkelsen not quite nailing Grindlewald the way that the now disgraced Johnny Depp did.

Perhaps it’s my memories of reading Harry Potter with my kids when we were so much younger, but I wish the Fantastic Beasts series well. The fans will continue to support what used to be magical and hopefully, the fourth edition of the franchise will appear in a couple of years. Should someone new start off watching the series with this one? No. Should a neophyte watch earlier iterations of the films? Absolutely. They’re on Crave TV/HBO Max.

Should audiences go to Fantastic Beasts: The Secrets of Dumbledore? I suppose so. It would be nice to see the last two proposed entries in the series and this one is certainly entertaining enough.