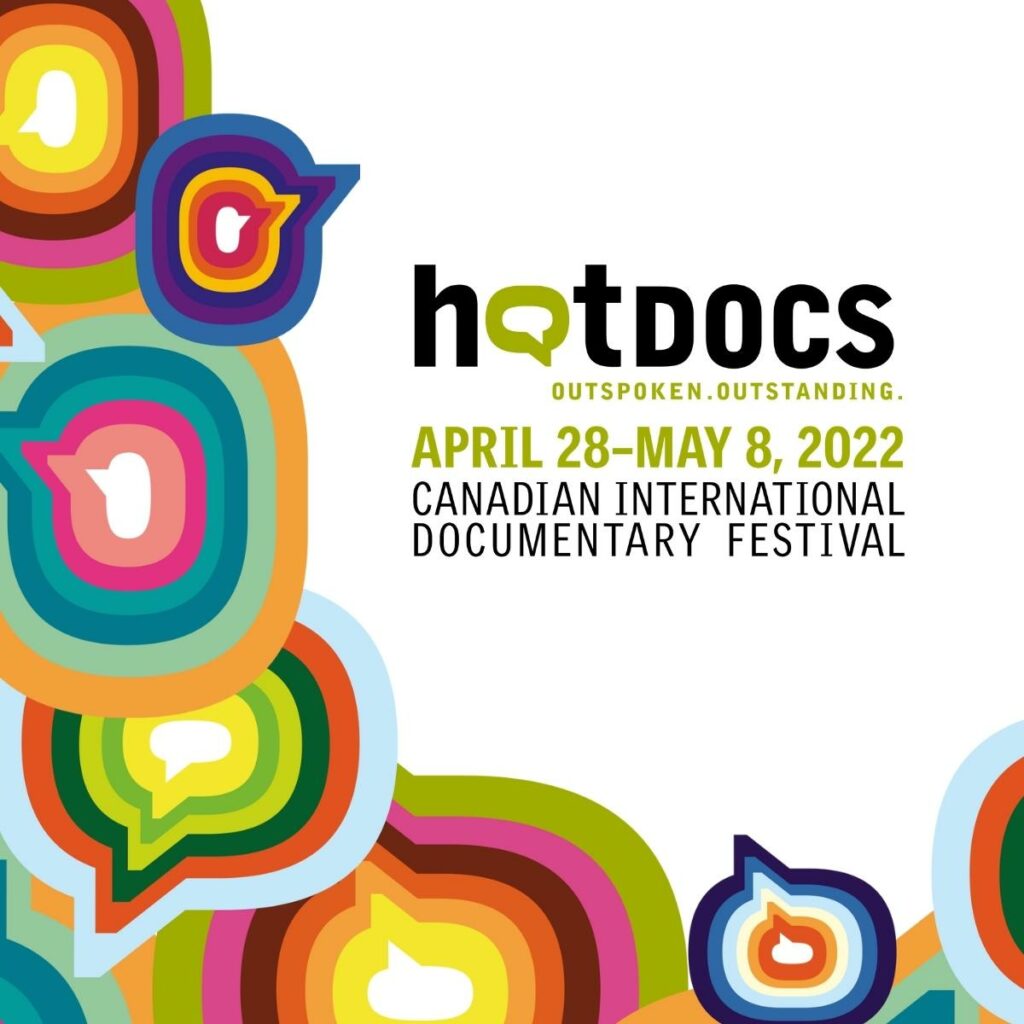 Canada’s finest documentary festival is back

Hot Docs started its ten-day run last night and, as always, it’s terrific for a documentary nerd like me to view huge lineups forming to watch films starring real people dealing with events occurring in everyday life, not Hollywood. Not only is life changing in our post-pandemic society, but the choices made for enjoying content are moving, too. For two years we have been spending our “filmgoing” time streaming everything from comedies to epic dramas to reality TV online but that is morphing now.

Many people are ready to go out into the world again, just in time for Hot Docs. Others are staying at home in front of their screens or finding satisfaction in supposedly “real” social media including TikTok, Instagram and the now more problematic Twitter. You can look at content anywhere but let’s hope that many of us will embrace the older technology and return to screens to watch everything from the Marvel Universe to the Quotidian World in its cinematic form, the documentary. And, in this case, its festival.

Categorizing what you can see at Hot Docs is nearly impossible. Talking to a respected documentary colleague today, I opined that the festival felt re-energized, filled with politically and socially relevant content. He agreed that Hot Docs has put together a great program, but his enjoyment is based on how quirky and artistic the films are this year. It reminds me of a parable embraced by the Buddhists, Hindus, Jains and Sufis about five blind individuals asking to describe an elephant. The descriptions vary wildly from the one who holds the trunk and thinks it’s a snake to the one who touches the tusk and imagines a creature resembling a spear. What you love is up to you—and what you understand. Or as the French say, “chacun a son gout” (to each their own).

Hot Docs 2022 is one of those gargantuan events, which can be captured to some extent by numbers. The festival will be showing 226 films, including 12 in the Canadian Spectrum and 10 in its International counterpart, and 27 Special Presentations—sort of like Galas—from everywhere in the world including Canada. A “made in Chile” focus will show six films; Markers—unique essay films—are represented by six, while Persister, with feminist films, is screening nine new docs. Artscapes—one of my favourites—is offering 12 features and three mid-length docs and Nightvision (a sort of Midnight Madness) will show five “scary” docs. There are three retrospectives, one on the African-American documentarist Stanley Nelson, another on Quebec’s female socio-politico filmmaker Raymonde Provencher and the final on the great Indian doc-maker and thinker Anand Patwardhan. All exemplary choices. More numbers but, indeed significant: 63 world premieres, 47 international ones, 36 for North America and 42 for Canada.

So, what should I tell you about—the trunk of the elephant or the ear or the tusk? The Opening Night Film is Into the Weeds, and you should see it—but perhaps you should wait to view Jennifer Baichwal’s incisive, hard-hitting doc about the infamous corporation Monsanto and its use of the cancer-creating herbicide Glyphosate until its theatrical release at the end of May. I’ll review it then.

Let’s talk about films that we want to talk about, to mis-quote Raymond Carver.

Navalny is a remarkable piece of hagiography by Toronto filmmaker Daniel Roher, who evinced a great admiration for Robbie Robertson in his previous doc feature about the Band, Once Were Brothers. Here, he spends most of the film with the charismatic leader of the opposition to Putin, Alexei Navalny, who is quite impressive on camera. Not only is he articulate and brave, he comes across as a very likeable person, who loves his wife and son and daughter a lot but feels that someone has to take on Putin and his evil regime. Roher spends considerable time in Germany with Navalny as he recovers from a nearly fatal poisoning attack in Siberia, which clearly was caused by the Russians. As an audience, we’re onside when Navalny is able to get one of the conspirators to spill the beans on film, giving concrete proof that his poisoning was an assassination attempt. Not content with exposing Putin to the Western media, Navalny decides to go back to Russia to try to change the country’s corrupt political system. Roher has made a film of true significance. It’s one that we all should see.

Zero Position is a film that couldn’t be screened at a more opportune time. Toronto photographer Louie Palu is one of those rare visual artists born with an eye for the most important, revealing image. Brave and determined, he decided to go to Ukraine after Russia’s invasion of that threatened country. Palu had already experienced conflict, particularly in Kandahar, Afghanistan, where he was embedded with the Canadian troops while armed conflict raged. He was ready for the situation in Eastern Ukraine, where the battle took place in the Donbass and Luhansk regions, exactly where the fighting is taking place now. Palu’s film shows the terrifying conditions people are experiencing, as bombing and shooting erupt in their towns and villages every day. What Palu depicts is the sort of conventional war that supposedly ended after Korea. There are tanks and machine guns and hand grenades and rifles in places filled with factories and warehouses and train stations and old-fashioned city squares. Palu’s film is startling, straight-forward and absolutely engaging. He places you in the middle of the war zone that most of us are following every day on the news broadcasts. Well shot, tough, dispassionate, Zero Position is a documentary, which everyone should see.

Freedom From Everything is a film that combines the personal and the political in a compelling way. Mike Hoolboom, the director and writer of this extraordinary work is someone who is dealing with the consequence of two pandemics, AIDS in the ‘80s and ’90s and now COVID. A brilliant analytic thinker who cares about humanity not just himself, Hoolboom places his own life into a political and emotional context. During AIDS when he nearly died, Hoolboom saw how the right-wing establishment of the period—the Reagans and Thatchers—used their political power to reinforce their own positions and those of their wealthy allies while effectively killing LGBTQ artists and activists. Now, with COVID, the pandemic has fanned out to stop all of us from experiencing our daily lives. Hoolboom moves from the personal to the political, interrogating how we got to a time when democracy doesn’t function at all. Combining his life and practice with the philosophy and artistry of the German-Japanese artist and philosopher Hito Steyerl, Hoolboom has crafted a brilliant essay, which examines life under COVID and truly asks the question: WHY?

These are just three of the extraordinary films at Hot Docs. There are two hundred others to potentially experience. Over the next week and a half, I hope you’ll join me to explore one of Canada’s most remarkable cultural experiences.