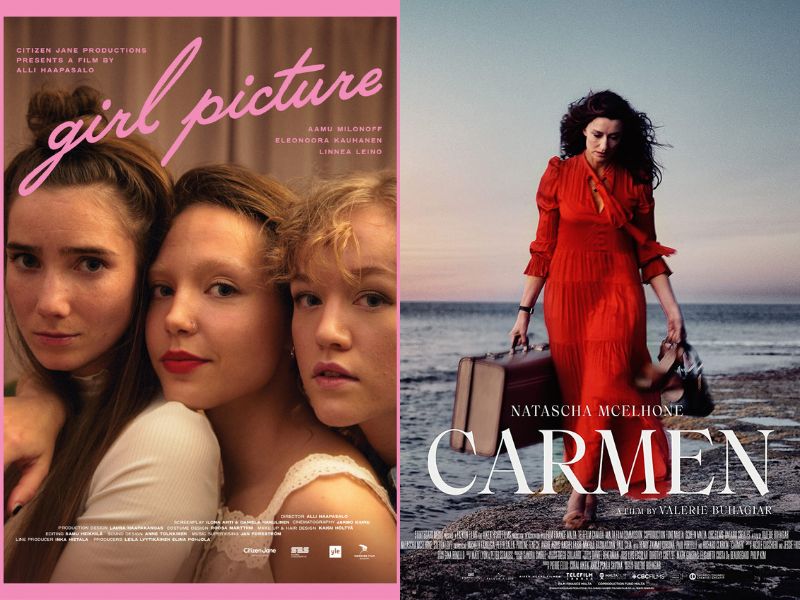 Directed by and Starring Women? Yes!

Each night I ask
The stars up above
Why must I be
A teenager in love? —Doc Pomus & Mort Shuman

Language is so finicky and precise: a word can mean something far different in another country’s parlance. Girl Picture, the Sundance Award-winning Finnish film released in its own country as Girls, Girls, Girls, can’t be shown with that title in North America since “girls” is now a demeaning word. Apparently, in Finland, young women don’t mind it. And just like their male counterparts—boys? Young men? —they are governed by their emotions and tremendous need to reach out and touch someone, or perhaps many people.

Girl Picture stars three young women, who have never been prominently featured before in a film. Aamu Milonoff’s Mimmi is a short, intense brunette, who misses her close relationship with her mother, who has remarried and now has a young son. Eleonoora Kauhanen’s Ronkko is a funny, very earthy blonde who has never met a guy who satisfies her physically. Ronkko and Mimmi are best friends, working in a mall at a smoothie shop, where they meet many guys and share intimate secrets. Did I mention that the Finnish young women are attractive? They are—as is Emma (Linnea Leino), a dedicated skater who has lost the ability to perform the triple lutz. (It’s one of the hardest jumps to perform; no woman beat it, with a quadruple, until 2018). When she meets Mimmi, sparks fly.

Alli Haapasalo’s film isn’t about sex although there are very emotional, but not overtly pictorial, sequences with her leading performers, giving us a sense of both heterosexual and lesbian relationships. Girl Picture is a drama, but an often funny one, in which young women sort out their lives in three successive Fridays, in which they party, get physical, and spend time with friends of both sexes (It must be noted that this film doesn’t deal with trans relationships).

What makes Girl Problem so likable is the cast and their situation. Mimmi, the angry, very smart, smoothie operator, tumbles for Emma, the less worldly figure skater. Their truly romantic relationship forms the film’s central story, which is about acceptance and disappointment. In the film, they go to the darkest places. In comparison, Ronkko’s story could almost be comic: all she wants is an orgasmically satisfying relationship. May I point out that this is a sophisticated European film, though my hope is that Canadian young women, in actuality, match their Finnish sisterhood, though not in cinema.

Girl Picture is the kind of enjoyable film that used to be made in North America but is only produced in Europe now. Mimmi, Ronkko and Emma could be Brittney, Rachel and Jane in Canada. Their issues and stories would be the same. There should be more films like this everywhere—they should be seen and supported.

Everyone has heard of The Maltese Falcon but how many have of us have seen a film made in Malta? Carmen—sadly, not based on the Bizet opera—is that rarity, a film set in Malta, made as a coproduction between that famous island country and Canada. This surprising alliance took place because the Canadian director-writer-actor Valerie Buhagiar is a Maltese-Canadian and was able to use her unique status to make a drama in her truly exotic homeland, which has occupied a major place in history since the time of the Carthaginians, Greeks and Romans, through the early Arabs, to the Knights of St. John (who purportedly made the legendary falcon) to the French and the British.

Buhagiar has taken the measure of Malta, working with cinematographer Diego Guijarro to evoke the traditional architecture of the villages, the splendid hilly countryside and the awe-inspiring cliffs of this Mediterranean island. She also understands the religion and traditions of Malta and of those she is less enamoured. Though the villagers seem to accept their station in life, it’s easy to see that there is no social mobility—you are the same from birth, and that’s it. And, according to Buhagiar’s directorial notes, priests in Malta bring their eldest sisters with them to be their servants for life, to them and the Church.

As the film begins, we see Carmen, a middle-aged woman dressed in sorrowful black clothes, daydreaming until forcefully reminded to return to her Cinderella-like subservient role. She sits in the back aisle during her brother’s Church ceremonies, staying to clean up afterwards. Her life appears to be over until one morning when she goes upstairs to wake her brother only to find him dead of a heart attack. So, one asks, what happens to Carmen?

Buhagiar has created a lively tall tale of a film. Left on her own, kicked out of the church, without a penny to her name, Carmen proves surprisingly resourceful. When the replacement priest doesn’t arrive, she begins to sneak into the church, sleeping on the pews or upstairs in the bell tower. Trapped one morning in the confessional booth when unexpected penitents arrive, she improvises quickly and offers brilliant religious instructions, the best being the idea that a woman who wants to get rid of her husband should cook the same meal for breakfast, lunch and dinner. Sure enough, as the film continues, we find out that it worked—the awful man moves out.

Odd and sweetly tempered, Carmen is the kind of character who can only work if played by the right actor. Buhagiar, who was a fine young actor in Bruce McDonald’s Toronto New Wave films Highway 61 and Roadkill, has cast Carmen perfectly. Natascha McElhone, a brilliant actor who burst on the film scene in the mid- ‘90s playing Francoise Gilot opposite Anthony Hopkins in Surviving Picasso and went on to work with such directors as Steven Soderbergh and John Frankenheimer and actors George Clooney, Brad Pitt and Robert DeNiro, never became a star–but that’s not because she lacked talent or looks. As Carmen, McElhone uses her wide, highly expressive eyes, high cheekbones and wild, wavy hair to turn a repressed village woman into a romantic lead.

Carmen has a strong message to bring to audiences. Held back for centuries, it is time for the women in this unique island nation to become the equals of their men, economically, socially and politically. Carmen and her rival in the film, Rita, eventually triumph over societal expectations and become free, responsible women. Buhagiar’s film is also about prejudice against Arabs, which has gone on in Malta since the Catholics reconquered the island from their North African invaders. The film is a plea for tolerance, not just in Malta, but everywhere.

A film of high spirits and invention, Carmen is certainly not a typical Canadian work. Buhagiar should be commended for making this unusual film—and for casting McElhone in the lead.

Marc Glassman joined Classical Mornings to discuss these films. Have a listen here!