Film Review: “All the Beauty and the Bloodshed” & “White Noise” 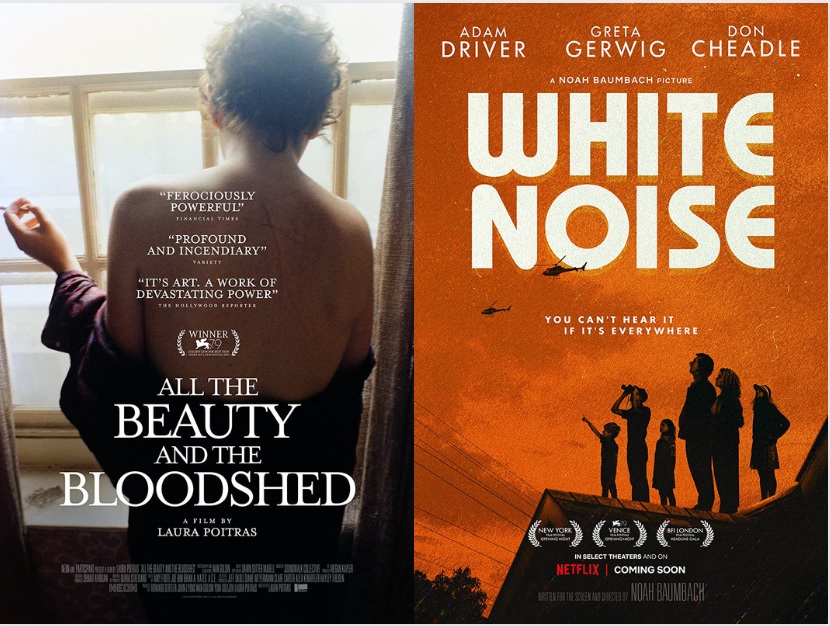 All the Beauty and the Bloodshed & White Noise

All the Beauty and the Bloodshed

All the Beauty and the Bloodshed is not only the best documentary of the year, but also 2022’s finest film. Laura Poitras’ profile of controversial, ground-breaking photographer Nan Goldin is remarkable: political, artistic and emotional. Throughout the film, Poitras uses a parallel structure, moving between Goldin’s on-going fight against the Sackler family, the makers of the devastating addictive drug OxyContin, and her history as a brilliant photographer in New York’s underground scene back in the ‘70s and AIDS activist in the ‘80s. Her campaign through P.A.I.N. (Prescription Addiction Intervention Now) in attempting to remove the Sackler name in museums and galleries around the world, where they had sought to create an impeccable reputation though billions in donations, provides a wonderful counterpoint to Goldin’s tale of becoming an artist and one of the leading voices of a generation that opened up the world to sexual diversity and then suffered through the terrifying pandemic of AIDS.

All great documentarians, unless they’re making essays, cast the right person as their star subject. That might sound cynical but it’s true. Whether it’s Robert McNamara in Errol Morris’ The Fog of War or Bob Dylan in D.A. Pennebaker’s Don’t Look Back or even the anonymous but charismatic Salesmen in the eponymous Maysles Brothers film or Timothy Treadwell in Werner Herzog’s Grizzly Man, it’s the rarely spoken truth about documentaries. It’s characters who make us love films. That’s why Michael Moore’s films work: they star someone who consistently angers us or is someone we want to embrace.

Laura Poitras knows this. Citizenfour, her Oscar winner, featured the mysterious, brilliant and attractive Edward Snowden as its focus. Here’s a bold prediction: All the Beauty and the Bloodshed will garner this year’s Academy Award. It’s one that Ms. Poitras should share with Nan Goldin, who has contributed so much to the film.

To be a documentary star doesn’t require the same characteristics that works in Hollywood. Nan Goldin doesn’t look like Scarlett Johansen or sound like Cate Blanchett. What she has is authenticity, a compelling life and an immense personal appeal. We follow Goldin as she recounts her story, starting with her life as a young girl stifled in suburbia, missing her older sister, who loved her but committed suicide. Escaping home, Nan—and she encourages the personal in writing about her—went to Boston where she met the beautiful androgynous David and other queens. She began to take photographs while living the queer life in 1970s Boston.

It must have seemed inevitable that Nan and David and others would move to New York in the late 1970s, a period that may have been over romanticized, but did allow, over the next ten years, the art of Basquiat, the music of Grandmaster Flash and John Lurie, and the films of Spike Lee and Jim Jarmusch to flourish.

Goldin didn’t hang out with future celebs. As Poitras’ film shows, she spent time in her scene, among queens, hookers, strippers, writers, hustlers, thieves, most of whom hung out at a bar where she worked in midtown Manhattan. It was at this time that Goldin made Ballad of Sexual Dependency, her personal photographic recording of what she saw and experienced during that dramatic, fraught period.

Goldin created a slide show, which she showed at clubs, and changed every day depending on her mood and feedback from friends, with music she felt like playing that night. Her “ballad” became a piece of living art, a way of turning photography into visual music, which could change each day depending on the mood of the artist.

Eventually, Goldin’s Ballad of Sexual Dependency became a book, published by the prestigious firm of Aperture, and was an international best seller. It was accompanied by reviews that hailed Goldin as a breakthrough artist, who had transformed photography into a personal practice, made with feeling and compassion, and far different from the observational shots of her precursors. As influential as Robert Frank’s The Americans had been in the early 60s, Goldin and her work was suddenly embraced by the art establishment in America and Europe.

As Poitras’ film shows, Goldin’s photography was accompanied by a heavy personal price. Her longtime lover beat her up severely a couple of years before “Ballad” was published; he objected to the book as did Goldin’s father. Goldin’s photos of her as a battered woman are upsetting and profoundly influential. As if that wasn’t bad enough, Goldin spent years embracing (and shooting photos of) dear friends and lovers, who succumbed to AIDs. During the worst period of AIDS deaths, Goldin worked with many artists, radicals, activists and members of the LGBTQ community to effect change in laws and even get hospital treatment for potential patients. It was important work but took too much time to be successful.

Poitras’s film shows us all of Goldin’s past history, beautifully buttressed by brilliant photos, including excerpts from Ballad of Sexual Dependency. In the contemporary footage, Poitras and the audience follow Goldin and her friends at P.A.I.N. as they attack the seemingly impregnable Sacklers. At first, we see demonstrations opposed by authorities and hear about illegal surveillances on P.A.I.N. activists presumably financed by the Sackler family. But then things change for the better.

First England’s Portrait Gallery and then the Tate, followed by the Guggenheim and the Met, finally realise that Goldin and her P.A.I.N. group are right. The major art galleries in London and New York stop accepting money from the Sacklers and through more demonstrations by P.A.I.N., they remove the Sackler name from galleries across the world. Law suits yield millions to victims of OxyContin, though no money can take back the lives of the hundreds of thousands who died or had their lives ruined by addiction to the drugs the Sacklers sold to them. (Those interested should see Alex Gibney’s brilliant HBO doc The Crime of the Century about what Big Pharma did to addict so many people, all for profit.)

Ultimately, the Sacklers got away with it. Their name is now removed from the world’s art galleries and they are disgraced. The Sacklers have had to give hundreds of millions to the families of their victims but they still survive, immensely wealthy and powerful.

What Nan Goldin achieved may not be a complete victory. But she, and her friends have triumphed over billionaires, forcing them to lose their prestige and at least part of their power. Laura Poitras’ film, made in collaboration with Goldin, is moving and beautifully artistic. It tells the story of someone who has lived her life in the margins, refusing glory and conventional success, and has now achieved a meaningful success on her own terms. Nan Goldin’s life, her work and activism has been sensitively captured by Laura Poitras in this indelible film portrait.

Noah Baumbach, director and scriptwriter, based on Don DeLillo’s novel

White Noise should be applauded for its grand reach but it’s unlikely to be loved by the public for its pessimistic account of our uncertain future. The film is directed and scripted by Noah Baumbach, who is that rarity, a sophisticate who successfully helms dark but funny takes on the human condition. Perhaps the success of his dark and incisive Marriage Story, which might have more accurately been called “Divorce Story”, has emboldened him to adapt the National Book Award winning postmodern novel by Don DeLillo. Like most of DeLillo’s works, this one moves beyond biting satire to create an absurd world that combines nightmares with bizarre and often entertaining fantasies all arising from our present living conditions.

Adam Driver and Greta Gerwig, a youngish middle-aged version of a formerly hot couple, are living the American liberal dream, as Professor Jack Gladney at the to-on-the-nose College-on-the-Hill and Babette, an exceptional yoga community teacher, when things begin to go seriously awry. Jack Gladney thinks everything is fine until their lovely academic small-town enclave and its diverse environs is hit by the “Airborne Toxic Event,” when poisonous fumes caused by a train crash envelope the region. Panic ensues, which releases the anarchy just waiting to be ignited in their corrupt and pretentious collegiate society.

Up to the toxic event, the film is played as an over-the-top glimpse into the intellectual and social excesses of academics and their families. As Jack Gladney explains to his fellow prof Murray Siskind (a brilliant Don Cheadle), he and Babette have melded together a family of children from previous marriages plus one that are both of theirs, with the kids—unbelievably bright and subversive—acting in congress with each other. Gladney has come to prominence due to his command of Hitler Studies, which isn’t about fascism but is about the dictator’s symbols and rhetoric, while Siskind is trying to do the same for Elvis. In a bravura scene, the two lecture to a class in counterpoint, pointing out similarities—both Hitler and Elvis loved their mothers—and how the two icons achieved prominence. It’s less about teaching and more about performing.

The heart of the matter in the film, and the book, takes place when the “Airborne Toxic Event” causes widespread panic in the region. Suddenly, we’re dealing with life and death, and there are gripping scenes of mass destruction on highways, angry citizens trying to make sense of the disaster and families clinging to one another. And yet, Jack Gladney still seems curiously detached even when he makes the life-threatening decision to go out in the toxic rain to fill the car’s tank in order to save his family by being able to head down a road to safety.

Where the film comes together is the final section, when Babette confesses to Jack that she’s been unfaithful to him due to anxiety and drug dependency and, well, another man. This revelation leads to a confrontation in a sleazy hotel and an ironic declaration of love in a former church. It’s all exciting and stylish—but perhaps deliberately—hard to buy.

Much takes place in White Noise and it’s easy to see why Baumbach wanted to tackle Don DeLillo, who is often praised for his imaginative takedowns of North American society, its hypocrisies and venal aspirations, in the wake of a world on the verge of collapse. Filmmakers like Noah Baumbach and David Cronenberg have embraced him, transforming his wild and brilliant texts into films that foreground action and character instead of language, in intriguing attempts to make them into cinema.

Cronenberg’s take on DeLillo’s Cosmopolis ten years ago was intellectually vigorous and featured a cast including Robert Pattinson, Juliette Binoche, Sarah Gadon and Paul Giamatti. Critics enjoyed it—including me—but it wasn’t a big hit. I’m afraid that Baumbach’s White Noise might suffer a similar fate. The problem is that DeLillo is an intellectual, whose attacks on society are thought provoking but lack the punch necessary to effect change, or even box office results.

DeLillo’s work is identified as being postmodernist, a style and philosophy, which dismisses as paradigms the concepts of reality, logic and reason but embraces language and subjectivity as ideas one can accept. It’s hard to understand postmodernism in a novel and even harder in a film. But Baumbach does his best to make it work.

With White Noise, Noah Baumbach confronts the same dilemma that David Cronenberg faced a decade ago. How do you convey postmodernism in narrative cinema? It is probably impossible but the attempt, aided by actors with the skill of Adam Driver, Greta Gerwig and Don Cheadle, is decidedly worth watching. While it’s not as emotionally resonant as Marriage Story, Baumbach’s White Noise will entertain and provoke you.