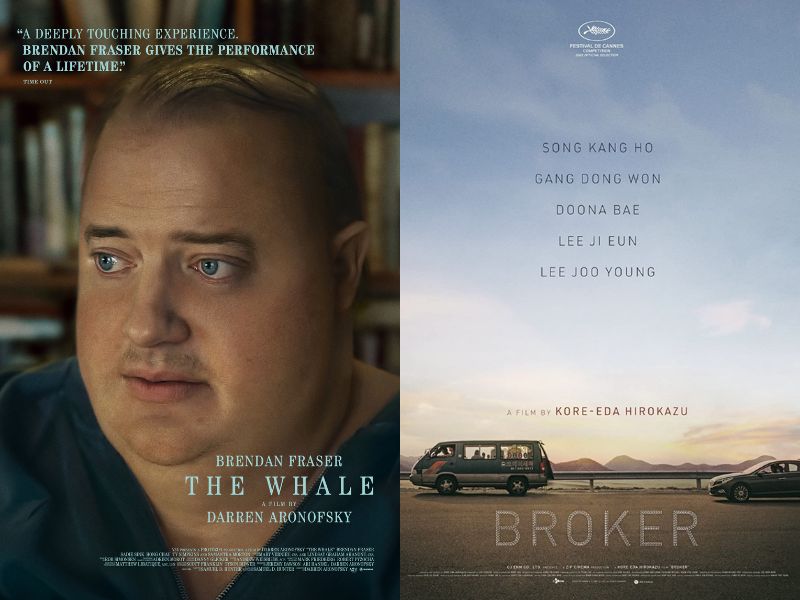 All in the Family

If you don’t use the words “strange” and “compelling,” then you’re not describing a Darren Aronofsky film. Trust me, The Whale, his latest psychodrama, is strange, compelling and divisive. Like most of his works, which include the hits Black Swan and Pi and the misses—to say the least—Requiem for a Dream and mother!, it’s a riveting and dark experience. Just right for the holidays? Not really, but this hasn’t been a truly festive year, and The Whale might be just the right film for people who didn’t binge on Home Alone and It’s a Wonderful Life this season.

The Whale’s titular character, Charlie, a passionate and acutely depressed English prof, is obese. It’s clear that he’s eating himself to death, which is a truly strange way to die. Gradually, we discover that he was a relatively healthy heterosexual, with a wife and daughter, until he rather scandalously became involved in a gay affair with one of his students. Tragically, that relationship ended with his new partner’s demise and the grieving Charlie has done little since except feel depressed and eat way, way too much junk food.

Based on a play by Samuel Hunter, The Whale is set in Charlie’s ramshackle home—essentially one large room that has a kitchen and living room, where a TV set, table for a computer and meals and a couch serve as his place of work and pain/pleasure. It’s here that Liz, his nurse and best friend tries to take care of him and eventually where his estranged daughter Ellie and former wife Mary come for increasingly difficult visits.

Charlie has only one positive desire in his life: to reconnect with Ellie, who is an extremely rebellious teenager. The film, like the play, is enamoured with language, which Charlie still teaches online since he lost his university job, maintaining an almost religious appreciation of its redemptive power. He believes that Ellie is a born writer, a natural truthteller. In the time he has left, Charlie wants to imbue his daughter with faith in herself and her ability to write. Naturally, Ellie resists Charlie, who abandoned her during his love affair, but she’s also fascinated by her father’s increasingly desperate attempts to connect with her.

Aronofsky is, of course, a wildly successful if controversial auteur, but this film is really about acting and not overt cinematic style. It’s clear that Aronofsky has to be acknowledged for casting former he-man Brendan Fraser in the critical role of Charlie, but this is a film that lives and dies on its actors. The near deafening Oscar buzz around Fraser’s performance as Charlie has reached boom levels: he’ll be nominated as best actor and could win. This is a showy part made all the more transfixing by the realization that Fraser is now a large man—not obese but hardly svelte—and this is a comeback role, the kind the Academy loves to honour.

Fraser is supported brilliantly by Hong Chau as the tough talking nurse Liz and more importantly by Sadie Sink in the key part of Ellie, the angry, understandably reluctant, daughter. The Whale succeeds as a drama because we do believe in the emotional relationship between Charlie and Ellie. Critics are writing in their year-end reports about the wistful British film Aftersun, which dramatizes the lovely but fraught bond between a father and daughter. In its brash, bombastic way, The Whale makes a brilliant companion piece to Aftersun. They are two of the most impressive films of 2022.

How do you turn a trio of tricksters trying to sell a baby on the illegal Korean market into likeable individuals, who you end up respecting and even loving? The brilliant Japanese writer-director Hirokazu Kore-eda has done it again, transforming impossibly ugly subjects into a story which makes you want to root for people that everyone should find repulsive. It’s the same quality that he brought to his Cannes Palme d’Or winner, Shoplifters, which made you care and be charmed by a make-shift family of thieves, including very young children. Film critics often refer to the late great Jean Renoir as a humanist and it’s fair to say that Kore-eda is the contemporary inheritor of that accolade.

The baby box, where mothers can leave their children, is common in many societies ranging from Pakistan to Germany to Korea. Mothers bring their children to safe places—churches, hospitals, community centres—where they can anonymously place babies in boxes with small warm beds and know that they will be taken care of, and well protected afterward.

Broker begins with the young sorrowful Moon So-young making her way through a rainstorm to the Busan Family Church, where she leaves her baby Woo-sung next to the baby box. Unknown to her, So-young’s movements have been observed in a car by female detectives Soo-jin and Lee as well as Ha Sang-hyeon and Dong-soo, who are inside the church.

When Ha Sang-hyeon and Dong-soo rescue the baby, who is not in the proper box, they decide to broker him through Korea’s large adoption network made up of couples who are eager to take babies, illegally or not.  Although So-young has left a note stating that she’ll come back for her baby, the veteran child brokers dismiss this as a sad mother’s sentiment, which will never take place. In one of the film’s humanizing moments, Dong-soo’s origins as an abandoned baby, whose mother’s sentimental statement of return never occurred, becomes part of his narrative as the film progresses.

To the surprise of Ha Sang-hyeon and Dong-soo, Moon So-young is the rare woman who decides to come back for her baby only to discover that Woo-sung isn’t only gone, he hasn’t been registered. To their credit, the duo decides to let Moon So-young in on their scheme to sell Woo-sung and offer to share the profits with her. What starts out as a nefarious business relationship evolves into something more—and that is the genius of Kore-eda, to make characters care about each other and us as viewers to feel empathy towards them.

Hirokazu Kore-eda is a master at scenes in which his protagonists show who they are in complex ways. Ha Sang-hyeon, who runs a drycleaner, chooses to show his cool when gangsters bring him a bloody shirt to be cleaned while demanding money he owes them. You understand why he is in the business of selling babies—his situation is dire—but it’s also clear that he won’t crumble emotionally even if his life is threatened.

Similarly, Moon So-young, once she agrees to sell her baby, becomes enraged when a couple start to bargain with Ha Sang-hyeon: all of a sudden her identity is imperiled because they’re not valuing her child properly. You see her anger and pride—and realize that she is finally asserting herself as a mother but in a very strange way.

Likewise, Dong-soo, initially a callow youth, shows his humanity once the brokers arrive at his old orphanage, where he’s treated as a home-coming hero. Although he revels in it at first, it’s nice to watch him become more helpful and kind to the kids as the day progresses: he clearly grows as a person when given proper attention.

Kore-eda lavishes the same attention to the pursuing detectives and to some of the potential adoptive parents. Just like Shoplifters and so many of his other films, he makes you feel more towards his characters even while the plot often turns against them. Broker isn’t as wonderful as Shoplifters but it’s certainly a film worth seeing and enjoying. It’s truly a film that feels right for this emotionally generous season.