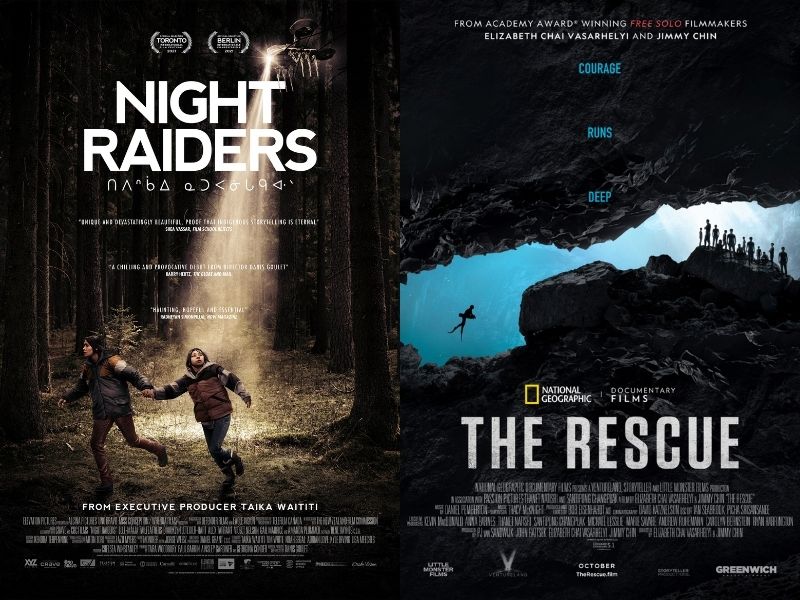 Night Raiders and The Rescue are worth seeing

Night Raiders is not only a fine film, but also a brilliant introduction to the kind of cinema we will see by Indigenous artists in the coming years: imaginative, compelling, politically subversive, respectful of their elders’ wisdom, often funny and immensely engaging. Critics shouldn’t be involved in prognostication, I know, but with the Indigenous Screen Office receiving millions in government support, the NFB totally committed to new Indigenous work and Telefilm Canada on board to produce features including this one, I don’t think that Nostradamus should be concerned with my prediction. We will see many more Indigenous films and can only hope and assume they will match or better Danis Goulet’s bold exploration into dysfunctional science fiction and the power or mothers and daughters in Night Raiders.

Goulet’s film is set in 2043, when a militarized government is taking every child it can plunder, and turning them into agents of the state. Fighting against an Orwellian future, Niska (Tailfeathers) has spent six years in the bush, the great Canadian north, with her daughter Wasesee (a dynamic Brooklyn Letexier-Hart) until the 11-year-old falls victim to a bear trap. Niska can’t fix her damaged leg, nor can she find drugs to alleviate her pain. Even with the support of Niska’s old friend Roberta (a brilliant Amanda Plummer), nothing can be done to save her daughter except allowing her to be captured by the authorities and turned into a potential Academy recruit, ready to fight for the state.

Devastated that she’s had to give up her daughter, Niska finds it impossible to make progress in her life until she is persuaded to join a Cree movement to kidnap their children back to their homes. It’s through the resistance movement led by Ida (a charismatic Gail Maurice) that Niska discovers that she might be a prophesized figure from the North who will lead the Cree’s efforts to fight the totalitarian White rulers. Goulet skillfully splits her narrative in two, following Niska’s efforts to help the Cree and rescue her daughter just as Wasesee turns into the finest student in the fascist academy while trying to figure out how to escape.

Night Raiders is a thriller, a crowd pleaser that will mesmerize audiences while creating a conflict between Indigenous freedom and White conformism. Goulet has constructed brilliant scenes when the Crees meet, debate policy, have fun and eat with each other. By contrast, the  scenes with Whites in charge are all set in the prison that is the academy, a terrifying indoctrinating force.

Goulet has cleverly set up her film with the kind of prophecy that an audience can easily dismiss as poetic artifice. The trickiest part of Night Raiders is its conclusion when all of the prophecies prove true. Danis Goulet has intrigued her audience and repaid their belief by crafting a brilliant conclusion to the film. A thriller with a huge difference from regular fare, Night Raiders deserves to be a Canadian hit.

The Rescue is one of the finest adventure stories ever to be filmed and it wouldn’t be half as powerful if it hadn’t actually taken place. It’s satisfying to acknowledge that the producer of The Rescue is National Geographic, not Universal or Disney. That’s because the film which has been made is totally true.

Most people will recall the astonishing tale of a Thai football youth team trapped in a vast cave, needing to be brought out to safety just as the monsoon season hit. Caught by a flood of water while in the cave, the kids and their coach couldn’t swim out to safety. With their fate on the line, hundreds of volunteers from around the world joined over 5000 Thais, ranging from religious leaders, health workers, the military and their Navy SEALs, to bring the boys back out alive.

The Rescue captures the pandemonium and chaos that enveloped the area around the cave as the Thais were swiftly joined by a U.S. Air Force Special Tactics team and a hastily assembled crew of British and Australian diving experts. Shrines were set up, filled with icons adorned by colourful cloths, where people constantly prayed.  The mothers of the trapped boys, appealingly emotional, sang and wept to their children. News crews from Japan to the United States set up shop, sending reports back to their homelands. All the time, the rains came, turning the ground into mud as plans were set to bring the boys back home.

Elizabeth Chai Vasarhelyi & Jimmy Chin, the duo who won the best documentary Oscar for Free Solo, their memorable portrait of mountain climber Alex Honnold’s quest to scale the immense El Capitain mountain in Yosemite National Park, are the appropriate filmmakers to make The Rescue. They know how to humanize subjects while relishing in the telling of their fascinating real-life dramas.

In The Rescue, much of the narrative concentrates on two quirky Brits, Rick Stanton and John Volanthen. You might call them the odd couple in that neither evokes expectations of heroism or even fear or respect from their new Thai colleagues. Yet these middle-aged white men, not in particularly great shape, have a skill that can save the day. They are brilliant cave divers, who find the claustrophobic conditions swimming in dank dark waters, equipped with lights and sometimes yard lines to get back to the surface, to be peaceful and desirable.

Vasarhelyi & Chin contrast these peculiar Brits (soon to be joined by equally odd Aussies and one Belgian) with the athletic powerful Thai SEALs, who find it frustrating that they lack the skills that the old foreigners have. Tragically, it’s only when one of their own, a former SEAL named “Sam” Gunan dies that the Thais realize how much they have to depend on Stanton, Volanthen and their friends, who include Chris Jewell, Connor Roe and most impressively Dr. Richard “Harry” Harris to get the job done.

The film skillfully shuttles between the media frenzy on the ground including revelatory TV news clips, speeches from the Thai authorities and visually impressive scenes in the cave, where the water is churning, and the rescue squad is assembled. The story kicks into gear as Stanton and Volanthen find the young football team—an incredibly emotional moment when the boys say thanks to everyone—and then have to figure out how to get them out alive. After much debate—and The Rescue is filled with references to endless meetings between the Thais and their well-meaning friends—it is decided that a crew put together by the Brits will bring them out—sedated.

The final section of The Rescue shows the power of non-fiction storytelling, whether in prose or audio or film. Most of the viewers of the doc will know what happens to the lads but it hardly matters as we hear about the life and death dramas that took place as the boys were brought back to the earth. When Dr. “Harry” Harris shares with us his fears about anaesthetizing the boys before swimming them to safety, you understand the risks he foresaw and the moral choices he had to make. Likewise, the tales of Chris Jewell, Rick Stanton, John Volanthen and their friends as they took upon the life-or-death mission of bringing the lads back from purgatory to their mothers are effectively rendered through their tales embellished by astonishing underwater footage.

The Rescue is a story so well told that a romance just had to be part of the picture. A Thai nurse, Amp Bangngoen, had been having an affair with Rick Stanton before this real-life drama took place in her hometown. This global event brought them closer although it’s not clear whether they’re still together now. Their romance might be hard to predict but it seems safe to suggest that The Rescue will be nominated for an Oscar next spring. It might win; you can never tell.