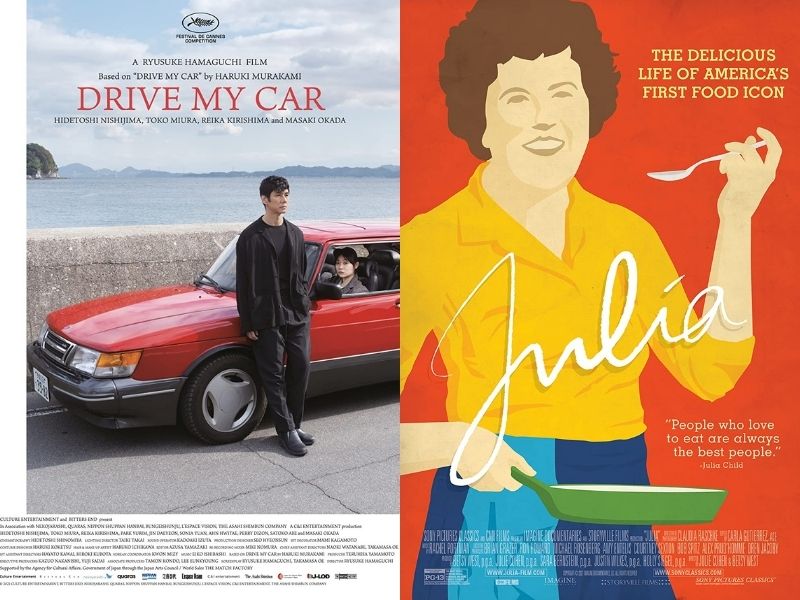 Films about more than Cooking and Driving

Ryusuke Hamaguchi, director and script based on a story by Haruki Murakami

The winner of the Best Screenplay Prize at Cannes, Drive My Car is a wonderful adaptation of a story by the acclaimed author Haruki Murakami. Ryusuke Hamaguchi, who wrote and directed the film, elaborates on the ideas and atmosphere of Murakami’s original. It’s a wonderfully complex narrative revolving around love, death, sex, storytelling, melancholy, and the theatre. Although Drive My Car’s 3-hours length might put some off, it is one of the finest films of the year, with fully etched out characters and conflicts that exist on personal and philosophical levels.

The film opens in Tokyo, where successful theatre director and actor Yusuke Kafuku and his wife, Oto, play an elaborate and quite strange game involving sex and storytelling. After a vigorous session, Oto begins to tell an intense tale to her nearly-asleep husband about a teenaged girl, who is so obsessed with a boy in her school that she breaks into his family home and spends time in his bedroom. The next morning, Yusuke recites the story back to Oto, elaborating on the girl and the boy’s family. And so it goes: Oto’s highly regarded TV scripts are actually a collaboration between the two, augmenting their intimacy, while also somewhat replacing the affection they still have for their daughter, who died while still quite young. But their bond only goes so far: one afternoon, Yusuke quietly enters their apartment and sees Oto making love with a handsome young actor, Koji Takatuski. Yusuke leaves without confronting her but soon after, Oto asks that he come home early one night because she has something to discuss. We never find out what the conversation would have been like because Yusuke finds Oto dead of a stroke. He’s left with questions and grief.

Two years pass with no resolution in his life until Yusuke is invited to direct Anton Chekov’s Uncle Vanya for a notable festival in Hiroshima. After a wide-open casting call, Yusuke turns Vanya, a play with melancholic characters working at cross-purposes to each other, into a multilingual piece, placing the issue of communication into the centre of the drama. He casts people who can’t speak each other’s languages—a Korean who uses sign language, a Chinese-American who can’t speak Japanese—in key roles. In order to get his actors to instinctively know what each is saying despite their linguistic challenges, he insists on having daily line readings with no emotions expressed by his performers. Defying the wishes of the festival administrators who expect Yusuke to play Vanya, he casts Koji, the young good-looking actor who was Oto’s lover, in the role.

Yusuke, in turn, is forced to accept a young female driver, Maskaki Watari, who the festival insists on employing. It’s a major adjustment for Yusuke to give up his Saab to Masaki and their relationship starts off quite coldly. While the drama mainly unfolds between Yusuke, Masaki and Koji, many other characters are brilliantly sketched in, particularly the Korean woman who signs (and is compelling as an actor partly because of it) and Yusuke’s affable and intelligent assistant who speaks many languages.

Just as in the Tokyo section of the film, emotions are slowly built up as the characters attempt to find normalcy in relationships, personal and professional, that are inherently problematic. Koji, in particular, becomes edgier and edgier, partially because Yusuke may be exacting revenge by miscasting him as Vanya. Eventually, Koji’s personal issues prove to be far darker than expected.

On the other hand, the relationship between Yusuke and his driver Masaki improves considerably, to the point where it seems as if they have created something resembling a father-daughter bond. It obviously helps that much of their dialogue is in a car; like Abbas Kiarostami, Hamaguchi understands how well speech plays out while in a vehicle. And our sympathies, as well as Masaki’s, are increased when Yusuke practices Vanya’s lines to an old tape in which Oto read the prompting dialogue to him. (Masaki is the same age that their daughter would have been, had she lived.)

As the film inevitably becomes more dramatic towards its conclusion, one never loses the sense that the best of part of Drive My Car is when characters are “on the road” figuratively or literally, trying to understand themselves and those around them. Inevitably, all that Yusuke and the others can do is accept their solitudes and try to act responsibly. Ryusuke Hamaguchi has made a near masterwork, inspired by Murakami, in which the attempts to break down the barriers between people is examined and quietly endorsed.

Julia Child was a larger-than-life character, and that wasn’t simply because she was an impressive 6 feet and 2 inches. Her voice, a spectacular warble, and enthusiastic almost naive manner, charmed generations of women and some sophisticated men, as she showed America how to cook. Some people exude charisma and Child was one of them; she could have pioneered home repair and found an audience. The evidence is there in the abundant archival footage employed by RBG (Ruth Bader Ginsberg) directors Julie Cohen and Betsy West in their film Julia, which shows the transformational effect Child had on America, particularly with her initial low-budget PBS show The French Chef, which started in 1963 and garnered Peabody and Emmy awards in the next ten years.

Weaving archival and contemporary interview footage, Cohen and West manifest their own enthusiasm for Julia Child, whom they demonstrate to be a proto-feminist, AIDs activist and pro-choice advocate as well as a fabulous chef. Much of Child’s politics is left to the final third of the tale, allowing those curious about the reasons why Julia become famous to be caught up in her development as a chef, at first in France, and then in Cambridge, Massachusetts. Having fallen in love and married Paul Child, a fellow member of the U.S. wartime organization the O.S.S. (Office of Strategic Services), the former Julia McWilliams moved to Paris with her husband when he joined the U.S. Foreign Service in the late ‘40s.

It was in Paris that she became enamoured of French cuisine, thanks initially to Paul, who was a gourmand. Soon, it must have been obvious that cooking had come to claim her life. By 1951, she had attended and graduated the prestigious Le Cordon Bleu cooking school. Soon after, she joined Le Cercle des Gourmettes, a women’s cooking group, where she met Simone Beck, who along with Louisette Bertholle, had a plan to write a cookbook for Americans to learn stylish French cooking. Julia Child swiftly turned the two writers into a trio, with her translations and well written explanations for each recipe making an important contribution to the book. The three worked for a decade on their cookbook only to see it rejected by its initially interested publisher, Houghton-Mifflin. Soon after, the well-connected publisher Alfred Knopf (part of Random House) took on the 700 plus page book and helped to turn Mastering the Art of French Cooking into a best seller, which is still in print over 50 years later.

Cohen and West make the case that through the book and her first show The French Chef, Julia Child effected a revolution in American cooking. The film moves from scenes of people eating TV dinners and consuming terrible junk food to contemporary footage of women talking about how they—or their mothers–suddenly decided to make nutritional, attractive dinners after Julia’s book and show hit the mainstream. Fairly quickly, celebrity chefs began to appear in places like New York, Chicago, New Orleans and San Francisco and TV cooking shows emulating Julia Child’s were broadcast on stations in major markets. And, of course, Child kept up with her new colleagues, writing more books and hosting shows with bigger budgets.

One of the pleasures of the film is the tale of Julia’s marriage to Paul. It was, by all accounts, a true love match and quite physical. As one of Julia’s old friend’s recounts in the film, the two would eat great lunches and then go to bed for hours. Paul totally worshipped Julia and was truly happy to become the husband to a super-star.

Inevitably, Julia Child’s life wasn’t a total success. There were reverses. PBS came to a parting of the ways with her, which only allowed Child to achieve a greater popular success with short features on Good Morning America for over 20 years. When nouvelle cuisine became popular, Child was attacked for her adherence to old-style “heavy” French cooking. But she weathered that storm as well as most criticism laid onto her, especially as she got older. Julia even came to terms with Paul’s passing, which took place over a decade before she died.

With Julia Child, one has the sense that she was a force of nature, who was bound to make an impact on people’s lives. What a boon it is that her revolution was in the kitchen and the result is better food and cooking in America and throughout the world. Julia is a lovely homage to a woman, who deserves the accolades that have accrued to her over the decades.