Film Review: The Unbearable Weight of Massive Talent & The Northman 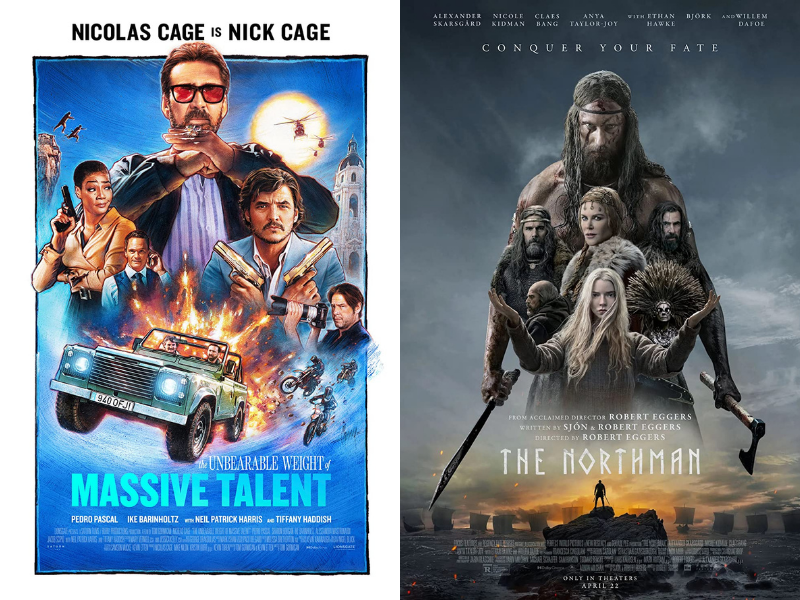 The Unbearable Weight of Massive Talent

You’ve got to hand it to Nicolas Cage. He’ll play anything and anybody including satirical versions of himself. Writer and director Tom Gormican deliberately wrote the script for The Unbearable Weight of Massive Talent about a star enmeshed in a crazy CIA plot to take down an arms dealer with Cage in mind. It’s hard to imagine any other film actor taking on a plot that is so deliberately intended to make fun of his status as a problematic Hollywood icon. So, kudos to Cage, who started making a critical comeback last year with Pig, and shows here that he’s a good sport, willing to play at being pretentious and neurotic, two charges that have been leveled against him over the years.

The plot is amusingly obvious. Cage plays Cage, a star who is trying to bond with his teenaged daughter while maintaining a very friendly relationship with his ex-wife and trying to keep his career on track. When he’s offered $1 million dollars to be the guest celebrity at a billionaire superfan’s birthday party, Cage reluctantly agrees to go. To his surprise, he’s utterly charmed by Javi Gutierrez (Pedro Pascal), his biggest admirer, and is devastated when a CIA agent (Tiffany Haddish) recruits him to turn in his new friend, who is actually an arms dealer.

In order to keep himself on the island of Mallorca, where the party is taking place, Cage feigns interest in writing a film script together with Javi, which in true meta-style, is supposed to be about two friends getting to know one another. When the plot begins to falter, both the film and the script add in chase scenes and gun fights, because genre pictures draw bigger audiences than do bromances.

Much of the movie revolves around the friendship of Pedro Pascal’s Javi and Nicolas Cage’s flawless rendition of Cage. Luckily for the film, Pascal, not known to me apart from a startlingly good performance in Game of Thrones, is terrific. He’s capable of matching Cage’s acting even at its highest pitch, making the film very funny in parts and quite engaging throughout.

There is the matter of the thriller plot, which Gormican handles with some dispatch and frivolity. But it doesn’t fit perfectly with the spirited amusement dished out when Cage is making fun of himself. Nor is it as appealing as the scenes with Pascal/Javi as his over-the-top hero-worshipping buddy. On the whole, though, this is a delightful if minor entertainment, which can be recommended to filmgoers, even those who aren’t Nicolas Cage fans.

How’s this for one of those famous Hollywood elevator pitches? “We want to do a mashup of Hamlet and Beowulf with some Marvel Universe mysticism, a ton of violence, some sex, and lots of male posturing.” Would you give the filmmakers the money if Alexander Skarsgard, Nicole Kidman, Ethan Hawke and Anya Taylor-Joy were attached to the project? Not sure? It does sound intellectual and esoteric, but it got made and it’s called The Northman.

Be forewarned: there’s a lot of howling at the moon in this film. Much of it is performed by Alexander Skarsgard, who was voted the sexiest male in Sweden five times and looks great at 45. Skarsgard, who initiated The Northman with director Robert Eggers, plays Amleth, the loyal son of King Aurvandill (Ethan Hawke). He is shocked—and has to run for his life—when his father is killed in a sneak attack by his uncle Fjolnir (Claes Bang). Before he goes, Amleth sees that his mother Gudrun (Nicole Kidman) has been taken by Fjolnir, the defilement of his royal heritage complete.

The Northman is constructed as an epic so it’s no surprise that years pass before he returns to wreak the sort of violent revenge that admirers of various related genres have embraced from Norse folk tales to Hollywood westerns. Amleth has survived from adolescence to virile adulthood as a “beserker,” a terrifying warrior, and he’s ready to take on the slayer of his father. He’s so willing that Amleth goes along with being a slave sold to his murderous uncle, who has fallen on hard times, having lost the family kingdom and been reduced to running a huge estate in Iceland.

Northern tales in the classic tradition must have romance and sorcery and the film doesn’t neglect either. Skarsgard’s Amleth is invested with his royal prowess by his father through Heimir (Willem Dafoe), who isn’t just a Fool but also a truth teller. In Iceland, the spirit of Heimir, who was murdered by Fjolnir, warns Amleth of his uncle and points the way for him for him to wrest the magical sword that can kill anyone from a dark spectral figure. For lovers of Shakespeare’s Hamlet, it’s fascinating to see Yoric’s ancestry as Heimir reprised in this retelling of the tale. And for lovers of Marvel University special effects, the visions of Norse mythology are gorgeous if slightly unnerving.

Amleth falls in love with a beautiful young woman, the powerful Olga (Anya Taylor-Joy), a “Rus” sorceress, who replaces Ophelia. The murderous rage that Amleth manifests towards his uncle and mother can hardly be endorsed but after a lifetime of considering Hamlet’s ambiguous anger, it’s fascinating to watch the story play out with a love relationship with a strong, mystical woman, that isn’t problematic.

Equipped with the proper sword and the love of a good—if scary—woman, Amleth works on the take down of Fjolnir and his agrarian principality. It becomes clear that Fjolnir has two sons, one fully grown and aristocratically obnoxious named Thorir and a younger but feisty lad from his liaison with Gudrun, named Gunnar. Amleth has to deal with them—and you know he will– but more important are his relationships with his mother and uncle. In the film’s key scene, Amleth confronts his mother and has to deal with her love of his uncle and hatred toward his father. For lovers of Shakespeare, this is fascinating terrain as Gertrude is never as forthcoming in the play.

The Northman plays out as a stark and viscerally compelling narrative from the Beowulf tradition. Much blood is spilled, endorsed (one presumes) by the Gods. Too many people die. Amleth and Olga almost run away to the Orkneys, a gorgeous and stark land where they might prosper. But Amleth has a fate he must pursue and a battle at a volcano, neatly dubbed The Gates of Hell. Heaven forfend that I reveal the ending of this saga.

Should you see The Northman? I liked it but I love Hamlet and am fascinated by its origins. Will you want to see it? Skarsgard is intensely watchable in a project he wanted to make. Hawke and Dafoe are terrific in small roles. I’d have loved to see more of Kidman: she and Skarsgard are combustible together. And I’m immensely disappointed that Skarsgard and Taylor-Joy create few sparks: I was hoping for more.

Go see this film if you love Skarsgard—who is terrific—or Hamlet or Nordic epics. If not, it’ll show up all too soon on a streaming service nearby you.