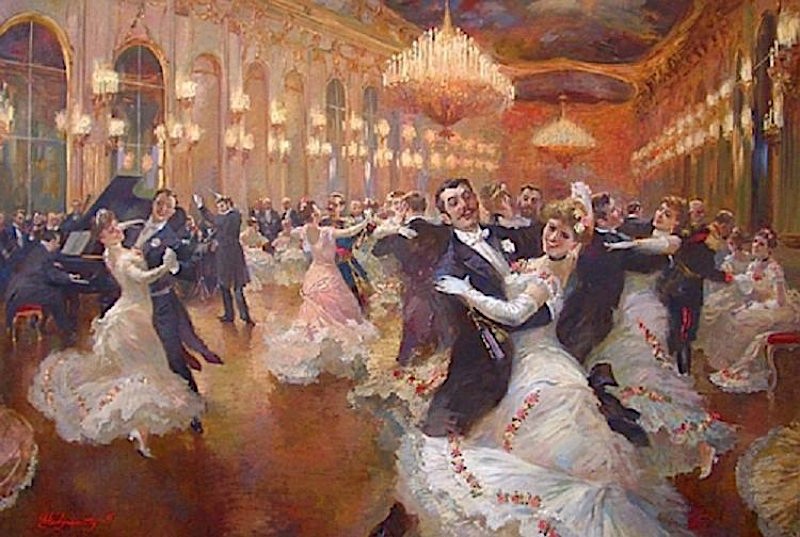 It can be confusing as to which Johann Strauss wrote which waltz; father and son did more for the Viennese waltz form than most other composers (though they were by means not the only waltz composers) . To help clarify things a little, Sr. wrote the Radetzky March (ironically, not a waltz), the Lorelei Rhein Klange Walzer, and Chineser Galop; and Jr. wrote The Blue Danube, the Emperor Waltz, and the music for the opera Die Fledermaus, for which the Overture is a popular short orchestra work on its own.

It’s fair enough to say that the son’s compositions are more “ear-catching” and better known these days, but it was his father who lay down the groundwork. It was Johann Sr. who created the classical Viennese dance form: a short introduction (in which one would imagine the dancers taking their places in the ballroom), the rustic peasant dance that’s been refined into an elegant dance theme; a strong, three-beat rhythm to twirl by; and a rousing finish.

Johann Strauss Sr. was ambitious, forming his own orchestra to compose for, and introduced Austria to the quadrille, a dance he heard during travels to France. His popularity lead him to ambitions of having his music performed for the coronation of Queen Victoria in 1838, a plan that succeeded. He also incorporated popular tunes of the day into his works to ensure crowd popularity. Johann Sr. also had a touch of the marketing gene: he gave each waltz a nickname, better to remember them by.

Franz Welser-Most conducts the Vienna Philharmonic Orchestra for a New Year’s Concert in 2011 in the Radetsky March, and as is custom with this work, he cues the audience to clap along, which they do, most enthusiastically.